Dr Steven Hollis has been awarded €224,986 from Geological Survey of Ireland for project entitled A detailed Sm-Nd and Pb isotope study of the pre-Carboniferous basement of Ireland, assessing its implications for Zn-Pb mineralization.

Irish-type Zn-Pb deposits are the mainstay of the Irish mining industry. In the last 50 years, five orebodies have been mined and over twenty sub-economic prospects discovered. With the recent closure of the Lisheen mine in late 2015 there is an urgent need to understand the complex interplay of structure, stratigraphy and fluid-mixing processes causing Zn-Pb mineralization. There is now a consensus that Irish-type Zn-Pb deposits are formed during early burial by the replacement of Lower Carboniferous limestones. Conditions required for their formation include dense networks of normal faults that allowed ascending, warm, metal-bearing fluids equilibrated with Lower Palaeozoic basement to mix with sinking, cooler, hypersaline brines that carried bacteriogenically reduced sulphide of ultimate seawater origin. However, there is a lack of understanding of pre-Carboniferous geology in the Irish orefield, and particularly the pre-Silurian basement from which metals were most likely sourced.

Current understanding of the pre-Silurian geology of central Ireland is mostly derived from a handful of drillholes underneath the Navan Zn-Pb deposit, deep crustal xenoliths, and several small terranes exposed in coastal sections near Balbriggan. All major Zn-Pb deposits within the Irish orefield are located within 50 km of the likely position of the Iapetus Suture Zone, a relic of end-Silurian continent-continent collision (the Caledonian orogeny) between Laurentia and Gondwanan-affinity continental crust. The Navan Zn-Pb deposit is situated within this suture zone near the SW corner of the Grangeeth terrane. This was further highlighted during the most recent Tellus geophysical survey (www.tellus.ie). Deep-seated, NE-SW trending structures associated with Caledonian terrane boundaries most likely provided suitable pathways for upwelling metal-rich hydrothermal fluids during the Carboniferous. 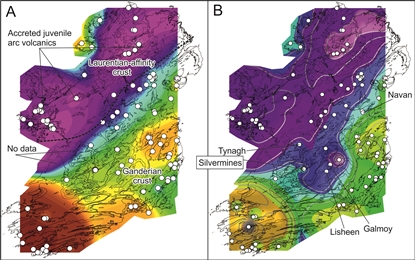 Our research aims to use Sm-Nd and Pb isotopic methods to identify and map Lower Palaeozoic Caledonian terranes and deep-seated crustal structures across Ireland (Figure 1) which may have focused upwelling hydrothermal fluids. We will also investigate links between these terranes and the metallogenic variation in Irish-type Zn-Pb deposits; and through a detailed 3D deposit-scale Pb isotope study of the Lisheen deposit, characterize fluid-flow pathways and whether any isotopic vectors exist to aid exploration. Our research follows several cutting-edge studies across Australia which have highlighted the effectiveness of the combined Pb and Sm-Nd isotope systems to detail regional-scale crustal evolution and mineral prospectivity.

Figure 1.  Preliminary Pb isotope maps of Ireland, with data compiled from 11 peer-reviewed sources identified to date. The underlying linework reflects 1:500,000 scale bedrock mapping. Sample locations are symbolized by circles. (A) 206Pb/204Pb map of galena occurrences and other Pb-rich phases. Pink colours represent low 206Pb/204Pb ratios (~17.2), with shades of deep red in SW Ireland representing higher 206Pb/204Pb (~18.8). Note the stark contrast in isotopic ratios across the Iapetus Suture Zone (ISZ). Whereas Ganderian (i.e. Gondwanan-affinity) crust is associated with high 206Pb/204Pb values, accreted Laurentian-affinity arc volcanic rocks associated with the closure of the Iapetus ocean are characterized by juvenile values. The area between the dashed lines represents the approximate mapped boundary of the Down – Longford terrane. The high 206Pb/204Pbvalues in the Down – Longford terrane suggests this Silurian accretionary prism is underlain by Gondwanan-affinity crust (i.e. the leading edge of Ganderia). (B) µ map of Ireland with the position of mined Irish-type Zn-Pb deposits highlighted. Contours represent variations of 0.1 µ. Low µ values are given in pink (~8.8) and purple, with higher values in yellow and red (~12.5). An important feature to note is the step in µ values associated with the Rathdowney Trend corresponding to significant Zn-Pb mineralization at Lisheen, Galmoy and Rapla.