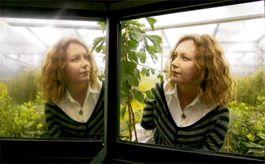 Dr Jennifer McElwain at the opening of the Rosemount Environmental Research

How did plants survive periods of mass extinction in Earth’s past? And what can we learn from their coping mechanisms to help protect today’s plants from the impacts of climate change?

Those are some of the questions being asked by Dr Jennifer McElwain, a lecturer at UCD School of Biology and Environmental Science, who has been awarded a prestigious European Research Council grant to further her studies.

“We can simulate climate conditions either going back 500 million years or going forward to what we predict into the 21st century,” she explained.

The Programme for Experimental Atmospheres and Climate facility, which Dr McElwain directs at Rosemount, offers researchers the opportunity to see how subtle changes in the atmosphere can affect living organisms. The large chambers allow tight control over important factors such as light, temperature, humidity and the levels of oxygen, carbon dioxide and sulphur dioxide gases. Then scientists can analyse the plants to see whether the environmental changes affect the plant’s shape and biochemistry, and even soil microbes over time.

And what makes the data from these growth chambers particularly valuable is that you can look at the effects of changing several parameters at once, according to Dr McElwain.

“You have to create simplistic experiments, you can’t completely reconstruct natural conditions, otherwise you wouldn’t know what factor is having an influence on the plant physiology, but I think to date people’s experiments have been too simplistic,” she said.

“What we are seeing from our experiments is that the plant responses are very different if you change the levels of one gas, compared to when you change two or three gases in combination. And we can simultaneously control three atmospheric gases, which really is unique.”

By better understanding how the ‘survivor’ plants adapt in order to fix carbon, conserve water and generally cope successfully with changes in temperature and atmospheric changes, Dr McElwain’s work should inform approaches to boost the productivity of crops sustainably as the climate continues to change.

More specifically, under the ERC grant Dr McElwain is looking to track how atmospheric oxygen has changed in Earth’s history. Oxygen changes tend to follow a slow course, but as a gas that is critical for life, it can have an important impact on the Earth’s biodiversity.

“At the moment we have no direct or indirect method of estimating the concentration of oxygen in the atmosphere in the past,” she said. “We think the pre-life concentration of oxygen in the atmosphere was close to zero, then plant life evolved and oxygenated the atmosphere. And we also think there were times in Earth’s history when oxygen levels were higher than today, leading to global wildfires. There were other times when oxygen levels were lower, which would have been unsustainable for mammals.”

Already, the research of Dr McElwain’s group has pointed to interesting relationships between atmospheric oxygen and the number of stomata, which are structured openings on leaves that control how gases and water vapour enter and leave the plant. The research has also identified chemical changes in plants that relate to oxygen levels.

Such features would be preserved in the fossil record, so they could potentially be used as markers to infer levels of atmospheric oxygen at the time in Earth’s history when the plants lived.

“I’m interested in how changes in oxygen have influenced the timing of critically important events in the evolution of plants,” she said.

“Throughout Earth history major new groups of plants and important plant structures evolved, such as grasses, wood, leaves, and others have gone extinct - was it climate change that triggered these events and did atmospheric oxygen play a role?”

UCD Rosemount Environmental Research Station was developed with funding from the Higher Education Authority under the Programme for Third-Level Institutions, and PEAC is part-funded through a Marie Curie EU grant. Dr McElwain’s research has also received funding from Science Foundation Ireland and the National Science Foundation, USA.