Congratulations to Dr Jessica Smyth, co-author on a new Nature paper just published on “Accurate compound-specific 14C dating of archaeological pottery vessels”. The exciting new method, developed by colleagues at the University of Bristol, is now being used to directly date pottery from a range of key sites up to 8,000 years old in Britain, Europe and Africa. Archaeological pottery has been used to date archaeological sites for more than a century, and from the Roman period onwards can offer quite precise dating. But further back in time, for example at the prehistoric sites of the earliest Neolithic farmers, accurate dating becomes more difficult because the kinds of pottery are often less distinctive and there are no coins or historical records to give context. Until now, archaeologists had to radiocarbon date bone or other organic materials buried with the pots to understand their age. But the best and most accurate way to date pots would be to date them directly, which the University of Bristol team has now achieved by radiocarbon dating the fatty acids left behind from food preparation. 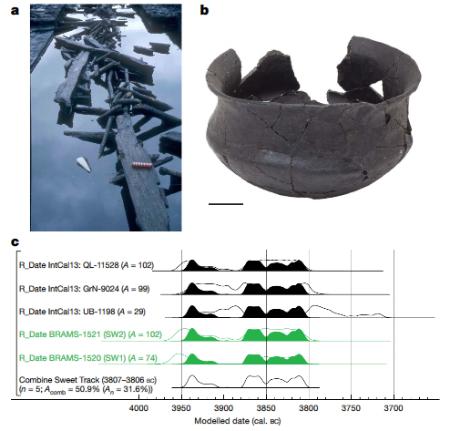 The work involved designing a new way of isolating the individual fatty acids in these ancient food residues and checking they were pure enough for accurate dating. The team then had to show that the new approach gave dates as accurate as those given by materials commonly dated in archaeology, such as bones, seeds and wood. To do this the team applied the new method to pottery from a range of archaeological sites that already had precise dating.