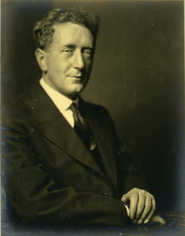 Born in London of Irish parents, he learnt Irish at Gaelic League classes where he met Mabel Washington McConnell, a Belfast Presbyterian and nationalist. They married in 1911 and lived in Brittany for two years in the company of writers and artists. While in London FitzGerald had been a member of the Imagist group of poets which included Ezra Pound with whom he had a lifelong friendship. Mabel had acted for a time as secretary to George Bernard Shaw. They moved to the Kerry Gaeltacht in 1913 where Desmond became an organiser for the Irish Volunteers. He was expelled from Kerry on suspicion of signalling to German submarines, moved to Bray, County Wicklow and fought in the GPO in 1916. Imprisoned at Dartmoor and Maidstone, he was elected Sinn Féin MP for the Pembroke division of Dublin at the 1918 general election and released later that year. In 1919 he was appointed Dáil Éireann Director of Publicity and published the Irish Bulletin for which he was again imprisoned until July 1921. Pro-Treaty, he served as Minister for External Affairs, 1922–27, representing Ireland at the Imperial Conferences and the League of Nations and as Minister for Defence, 1927–32. He continued as TD for Carlow-Kilkenny, 1932–37, and as a member of the Seanad, 1938–43. His publications include Preface to Statescraft (1939). A multilinguist and a man of wide learning, he was a visiting lecturer in philosophy at Notre Dame, Indiana.

This collection was deposited in UCD Archives by the children of Desmond and Mabel, particularly Dr Garret FitzGerald, in May 1987.

Irish Volunteers and Sinn Fein: material relating to his expulsion from Kerry, his trial and imprisonment, 1915; 1916 Rising and 1918 general election.

Director of Publicity, Dáil Éireann, 1919–23: communications with Dáil departments and ministers concerning the production and distribution of the Irish Bulletin and other publicity and propaganda material and the gathering of intelligence mainly concerning outrages, breaches of the Truce and the ill-treatment of prisoners in custody; publicity material in support of the Treaty; the operation of censorship during the Civil War and relations with the press; the death of Collins and Griffith and the execution of prisoners; communications with government departments and the Army mainly concerning republican activity and alleged outrages; material relating to Northern Ireland with particular reference to the Belfast boycott and pogroms.

Collection of c.200 photographs: originating from his Department of Publicity function, relating overwhelmingly to the Civil War but including some 1916 Rising, War of Independence and Irish Army photographs. Topics include the destruction of the Four Courts, coastal landings, casualties, the destruction of buildings, and the Belfast pogroms.

Minister for External Affairs, 1922–7: the promotion of the Free State cause abroad and counteracting Republican propaganda; relations with the Vatican; general Saorstat representation abroad including the appointment of representatives and reports from them.

Minister for Defence, 1927–32: ministerial visits to North America and the operation of the Constitution (Special Powers) Tribunal 1931.

League of Nations, 1923–33: Saorstat application for admission; registration of the Anglo-Irish Treaty and communications with the Dominions Office concerning their objections; reports from Saorstat delegates to Assemblies.

Member of the Provisional Government and Executive Council, 1922–31:documents relating to areas of major government concern and activity including the Civil War; subversive organisations; Northern Ireland, including the Boundary Commission; and general Anglo–Irish relations.

Literary and philosophical material: including his own writings, essays, reviews and lectures; correspondence with contemporaries such as Ezra Pound, W.B. Yeats, Francis Hackett, T.S. Eliot and Lennox Robinson; material concerning his teaching at the University of Notre Dame, Indiana, 1935–41.

Family and personal material, 1915–48: including correspondence with his wife, Mabel, throughout his career.

Papers of Mabel FitzGerald, nee McConnell, 1894–1959: including material relating to McConnell and FitzGerald family matters; to all aspects of her husband’s career; and to her own interests, including correspondence with George Bernard Shaw, 1909–34, for whom she had worked as secretary.