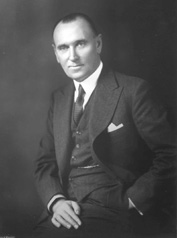 Michael MacWhite was born in 1883 in Reenogreena, County Cork. In his early twenties he travelled extensively in central Europe, Scandinavia and western Russia. He studied agricultural co-operation and high school teaching in Denmark, worked as a newspaper correspondent, and fought for Bulgaria in the first Balkan War in 1912. A born adventurer, he joined the French Foreign Legion in 1913 and saw action on the battlefields of France, Greece and Turkey. He was wounded at Gallipoli and Macedonia and received the Croix de Guerre three times for his valour in combat. Highly regarded within the army, he was selected to lead a French military mission to the United States to raise the 'Fourth Liberty Loan'.

Following the Great War, he returned to Dublin to his old friend, Arthur Griffith and offered his services to the fledgling D·il Šireann. In January 1919 Harry Boland sent him to Paris with the Declaration of Independence, the Provisional Constitution and the democratic programme that had just been adopted. MacWhite succeeded in getting these seditious documents published in Paris. He also became the Paris correspondent for the United Irishman and Arthur Griffith's paper, Young Ireland. George Gavan Duffy, envoy for the Government of the Republic, offered him the post of secretary to the Irish Legation to the Pairs Peace Conference in 1919.

In 1921, MacWhite was sent to Geneva as Dáil Éireann representative to Switzerland on the establishment of the League of Nations. MacWhite unintentionally made a significant indirect intervention in the Dáil debate on the Treaty. In the last speech before the vote, Arthur Griffith quoted from one of MacWhite's letters from Geneva, reporting world opinion as being in favour of the Treaty.

Following admission of the newly formed Irish Free State to the League of Nations in 1923, MacWhite was appointed permanent Free State delegate to the League. He played a very active role in League affairs and helped to secure the Free State's position as separate from that of the British Empire.

In 1929, MacWhite was appointed Minister Plenipotentiary and Envoy Extraordinary of the Irish Free State to the United States, with a mandate to consolidate and encourage existing ties between Irish America and Ireland and to promote trade agreements between the two countries. He was an extremely energetic and popular diplomat in Washington circles and succeeded in cultivating contacts with the powerful Irish-American community and the Catholic hierarchy.

MacWhite's next diplomatic posting was to Rome in 1938. This was an altogether different experience, the international situation making the Fascist government suspicious of foreign diplomats. When war broke out, MacWhite, as representative of a neutral country, was responsible for the Irish citizens in Rome, most of whom were clergy. He arranged travel documentation for those wishing to return to Ireland and protected the property of those who wished to stay.

MacWhite retired in 1950 with the personal rank of Ambassador, having served as a diplomat for Ireland for 30 years. In correspondence with writer Seán Ó Faoláin in 1949, he wrote: 'I am laying down the wand of office with no regrets. I have got as much out of life as any man could hope for. I have travelled a long distance from a thatched farm house on the top of File-na-Shouk, a mile or so south of Glandore, to the Palaces of Kings and Presidents and to hold my own amongst them, is I suppose, something to brag about.'

MacWhite died in 1958 and is buried in Glasnevin Cemetery.

This collection was deposited in UCD Archives by Kathleen MacWhite, his daughter-in-law, in November 2003.

Commemorative medals awarded or presented to MacWhite during his career (1926–49).