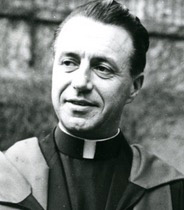 Educated at Belvedere College, Dublin, he joined the Augustinian order of friars in 1941 and was ordained a priest in 1952; he later stated that his choice of religious order was motivated by a preference for the family atmosphere of the Augustinians over the militarism of the Jesuits. He had already embarked on the study of history, taking his BA degree in 1949 at UCD, where he had among his teachers Aubrey Gwynn, R. Dudley Edwards, and T. Desmond Williams. His subsequent MA thesis (1952) on the Capuchin friar Francis Lavalin Nugent, one of the main agents of the counter-reformation in Ireland, earned him a travelling studentship from the NUI to Peterhouse, Cambridge. There he completed (1959) his doctoral thesis on Giles of Viterbo, the prior-general of the Augustinian order when Martin Luther was still within its ranks; it was published (1960) as Giles of Viterbo 1469–1532. Martin joined the staff of UCD as an assistant in history in 1959 and quickly established a glowing reputation among his students, who greatly appreciated the clarity and wit of his lectures and his warmth and accessibility as a person.

He was one of the four main candidates who contested the succession to the chair of medieval history on the retirement of Aubrey Gwynn in 1961. After a protracted struggle with fluctuating votes for the candidates at faculty, academic council, and governing body, in November 1962 F. X. Martin narrowly won the only vote that counted, that of the senate of the NUI, the appointing body. The controversy surrounding the appointment and the charge that ‘he was not really a medievalist’ served only to sharpen his ambition to build up the department of medieval history, to which four new appointments were made in the autumn of 1963. This laid the foundation for what was to become one of the finest departments of medieval history in these islands. His own contributions to medieval and early modern history included Friar Nugent, agent of the counter-reformation 1569–1635 (1962) and (with A. B. Scott of QUB) an edition of the Expugnatio Hibernica by Gerald of Wales (Giraldus Cambrensis), published by the RIA (1978) as an ancillary volume of A New history of Ireland.

Martin's interests or ambitions were too large to be confined within one period of history or one department. His restless energy led him into much wider engagements and attracted criticism from those who thought he was insufficiently devoted to his own specialism, and knew that his communication skills were much superior to theirs. It is true that his work on the Easter rising and the period leading up to it, particularly his elucidation of the role of Eoin MacNeill in the events of Easter week 1916, attracted a great deal more attention than his publications on the middle ages. His writings in this field included The Irish Volunteers 1913–15: recollections and documents (1963), The Howth gun-running, 1914 (1964), ‘1916—myth, fact, and mystery’, Studia Hib., vii (1967), 7–126, and (edited with F. J. Byrne), The scholar revolutionary: Eoin MacNeill 1867–1945 and the making of the new Ireland (1973). Yet while he was not immune to the attractions of fame, it was also the case that he sincerely believed that history should be presented in a way that made it accessible to a wide audience. In collaboration with T. W. Moody he organised the series of television lectures in 1966 which were subsequently published as The course of Irish history, probably the most widely read popular history of the country. It was also with Moody and F. J. Byrne, professor of early (including medieval) Irish history at UCD, that he cooperated in the project to produce a standard work of reference on all periods of Irish history. A New History of Ireland was a vast undertaking, perhaps an over-ambitious one, but all nine volumes ultimately appeared and, despite the delays in publication (1976–2004), they remain an important resource for anyone interested in Irish history.

In 1976 he was elected chairman of the Friends of Medieval Dublin, and this led him into the campaign for which he is best remembered: ‘Save Wood Quay’. Wood Quay was the proposed location for the erection of civic offices by Dublin corporation, but also a crucially important archaeological site for the exploration of Viking settlements in Dublin. Martin led with skill and determination the campaign to preserve the site, revelling in both the conflict and the publicity surrounding it. Ultimately he failed to prevent the erection of the civic offices, despite appeals to both the courts and public opinion, but he did gain an invaluable delay, which allowed excavations on the site to be concluded. His campaign also highlighted the importance of preserving Ireland's heritage and ensured that future discoveries would be treated differently.

In some ways the Wood Quay campaign was the highlight of his career, allowing him to demonstrate the full range of his exceptional talents as historian, advocate, organiser, tactician, and popular leader. Nothing else engaged his multi-faceted personality to quite the same extent. What followed must have seemed to him something of an anti-climax. He continued to publish both on Irish medieval history and in conjunction with Clare O'Reilly on the history of his own Augustinian order, culminating in their joint workThe Irish Augustinians in Rome, 1656–1994, and Irish Augustinian missions throughout the world (1994). The wide range of his publications (including some on Australian history) should not be allowed to obscure his real and enduring contribution to scholarship, and the fact that he ranged from the Vikings to the twentieth century is surely a sign of the breadth of his talents, industry, and interests rather than of neglect of any specialist period or topic.

Frank Martin served as a member of the Irish Manuscripts Commission from August 1963 and was elected a member of the RIA in 1967. He died in St Augustine's, the Augustinian house at Ballyboden, near Rathfarnham, County Dublin, on 13 February 2000, and was buried at Glasnevin cemetery. A list, compiled by Clare O'Reilly, of his writings (1947–88) is in John Bradley (ed.), Settlement and society in medieval Ireland: studies presented to Francis Xavier Martin osa (1988), 505–24.

The papers of Professor F.X. Martin osa were transferred from the Augustinian House of Studies, Taylor’s Lane, Ballyboden, Dublin 16 to UCD Archives in 2002, facilitated by Dr Clare O’Reilly.

Extensive series of correspondence with academic colleagues in University College Dublin, and in other Irish, Australian, European and North American universities on a broad range of topics but relating primarily to shared research interests.

Material relating to his membership of committees and boards in UCD, particularly his promotion of Australian studies; and his membership of external scholarly bodies such as the Irish Manuscripts Commission, the Royal Irish Academy and the Irish Catholic Historical Committee.

Material concerning medieval Dublin and the Wood Quay campaign; and his considerable publishing, editorial and broadcasting activities including A New History of Ireland; the Thomas Davis lecture series; The course of Irish history; and work on the Howth gun-running, the Irish Volunteers, the 1916 rebellion and on Eoin MacNeill.

Papers relating to his extensive research interests, mainly on the modern period; to his lectures and talks; historical and heritage projects.