Identity Statement for The O’Rahilly 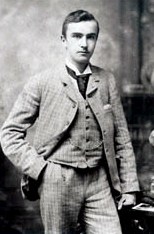 Born Michael Joseph Rahilly in Ballylongford, County Kerry and educated at Clongowes Wood and University College Dublin, he went to the USA where he married before returning to Ireland in 1909. An admirer of Arthur Griffith he joined Sinn Féin as well as being active in the Gaelic League, managing the journal An Claidheamh Soluis and publishing the article by Eoin MacNeill leading to the foundation of the Irish Volunteers.

He supported MacNeill’s attempt to abort the Easter Rising but, the attempt having failed, he joined the garrison in the GPO and was killed on 28 April 1916 leading a charge down Moore Street.

Papers relating primarily to Michael Joseph Rahilly, The O’Rahilly, including material concerning his education at Clongowes Wood College (1890–2) and his marriage to Nannie Brown in the United States (1899). Personal, family and business correspondence (1900–16) including letters to his wife and his sister, Nell, while travelling in North America to investigate the milling business (1900–01); rental of property in Dublin and the renovation of their cottage in Ventry, county Kerry (1909–10) and his business and motoring interests.

Correspondence, notes and research material (1900–15) on historical, scholarly, antiquarian and genealogical subjects, particularly the O’Rahilly family; and the promotion of Irish language and culture including his involvement with the Gaelic League.

Material concerning his involvement with Sinn Féin (1909–13) including a fund-raising trip to the U.S. (1909) and organisation of opposition to the official visit to Dublin of King George V (1911).

Material relating to the Irish Volunteers (1913–16) including notes and speeches; correspondence relating to fund-raising, recruitment, organisation, training and arming; the Howth gun-running (1914) and the split with Redmond (1914).

Research material, notes and transcripts compiled by Aodogán O’Rahilly in the course of writing his biography of his father Winding the Clock. The O’Rahilly and the 1916 Rising (Dublin, 1991), including correspondence with other members of his family, particularly Sighle Humphreys.

Papers relating to other members of the O’Rahilly family (1833–1903) including Nannie O’Rahilly’s personal correspondence (1893–1953) and material relating to her involvement with Cumann na mBan (1914–21); and letters from his uncle, Dr Michael Joseph Rahilly (1860–66), serving aboard British warships in the Caribbean and along the coastlines of North, Central and South America.