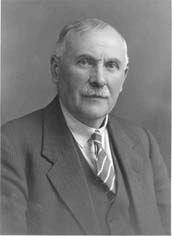 Born on 3 November 1874 to Patrick and Anne O’Rourke, his father owned a mill which Bernard inherited. He married Clare Clinton in 1907 and they lived at Gleneven, Inniskeen, County Monaghan.

He was active in local and national politics, a member of Monaghan County Council, 1905–25 and 1929–45; a Justice of the Peace, 1904–16, a position from which he was removed by the Lord Chancellor in June 1916 almost immediately after his release from detention in the aftermath of the Easter Rising; chairman of the Carrickmacross Board of Guardians, 1915–17, 1919 and 1922; a magistrate in the Dáil Éireann courts and a member of the Free State Senate, 1922–38.

This collection was deposited in UCD Archives by Bernard's son and daughter-in-law, Clinton and Emily O'Rourke, in September 1993.

Easter Rising, 1916: correspondence between Bernard O’Rourke, imprisoned in Richmond Barracks, Dublin, in the aftermath of the Rising, and his wife Clare and other family members and friends; material concerning attempts to secure his release; official documents relating to his imprisonment (May 1916).

Material concerning his removal from the Commission of the peace for County Monaghan (June 1916).

Correspondence concerning subscriptions to the Dáil Éireann loan in South Monaghan and lists of subscribers (1919–24).