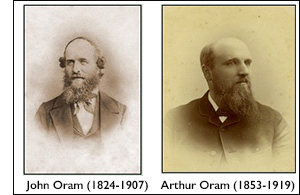 John Oram was born in November 1824 at Castle Cary in Somerset. He married Jane Talbot in July 1847. Through an acquaintance with Captain Wyndham, John was offered and accepted the position of managing Wyndham’s estate at Burrishoole, County Mayo. In 1853 John Oram moved his young family to the west of Ireland where they would live for the next twenty years. In 1873 he, along with his wife and children, returned to live in England at Clinsfold Farm in Sussex. Up to this point John Oram had recorded daily entries in his diaries but between 1873 and 1877 he simply provides a short summary, resuming his daily entries when he returned to county Mayo in April 1877. He continued to farm and carry out his agency work at Burrishoole and surrounding townlands until September 1881 when he once again returned to live in England, this time in Somerset. He settled at Lovington where he became a tenant of Charity Farm run by the Church Commissioners. He retired to Little Weston in 1892. John Oram was pre-deceased by his wife in 1906. He died a year later in 1907. They are both buried at Weston Bampfylde.

Arthur was born in March 1853 in Irwerne, Dorset but moved with his parents and two other siblings to County Mayo in June 1853. Arthur was educated in Ireland at Athlone School, completing his education in May 1868. The following year he commenced a clerkship in the offices of the Great Western Railway at Paddington where he remained for the next five years; moving to Burrishoole in 1873 to take over his father’s agency business when John moved to Sussex. He took over the agency business again in 1881 when his father returned to England to live permanently in Somerset. He remained at Burrishoole with his wife Catherine living at Wilford Lodge, farming and carrying out agency work for the rest of his life. He died on 6 August 1919.

John and Arthur Oram acted as land agents on the Burrishoole estate between the years 1853 and 1907. Initially John Oram acted as the agent for the owner of Burrishoole, Captain Wyndham. After his death the estate was sold, in the 1870s, to a number of people including Victor C. Kennedy, who became John and subsequently Arthur’s employer. After the death of Victor Kennedy’s son the estate was sold to Mr Anketell-Jones, who in turn sold the tenanted holding to the Congested Districts Board in 1906–07.

In addition to the agency work carried out by John and Arthur, both men farmed land in the surrounding areas, John leasing land at Teevemore. They also carried out agency work for other landlords in the surrounding townlands. Both John and Arthur were elected members of the Board of Conservators and managed fishing rights in the area. Arthur was also employed by the railway company assisting in the surveying and valuing of land required by the railway as well as acting on behalf of the Drainage Committee, surveying, advertising and awarding tenders and inspecting the work carried out.

This collection was deposited in UCD Archives by Carolyn Sturdy and Christopher Oram in June 2012.

Records the day to day management of the estate including herd management, crop sowing, harvesting and crop rotation; attending livestock markets, indicating the prices for the buying and selling of animals. Also refers to the maintenance of the land, roads, access points, dwellings and outbuildings.

Describes commitments to various committees including acting on behalf of the Board of Conservators seeing to the fishing rights on the estate and other local fisheries; and the Vestry Committee overseeing the management of the local church, the incumbency and the school. Also included in Arthur Oram’s diaries are references to his work on the Railway Committee, the Drainage Committee, and his association with the Congested Districts Board and Land Commission.

Refers to the collection of rents from tenants, settling terms with existing and new tenants, drawing up leases, negotiating with the tenants regarding arrears, attending the Assizes and Petty Sessions.

Both sets of diaries record the weather for each day and often refer to national and international events; current affairs including agrarian unrest in Ireland; famine; emigration, 1862–64; the ‘Fenian’ conspiracy, 1865; the beginning of the Land League, 1879; the shooting dead of Lord Cavendish, Chief Secretary of Ireland and Sir Thomas Burke, Permanent Undersecretary in the Phoenix Park, 1882; the election of William McKinley as the 25th President of the United States, 1896, and his subsequent assassination on 14th September 1901; the death of Queen Victoria 1901; the appointment of James Stevenson as Chief Constable of Glasgow, 1902; the death of King Edward VII on 7 May 1910; news of a Rising in Dublin, 25 April 1916; and the 1918 ‘flu epidemic. Also refers to notable meteorological and astronomical events such as the total eclipse of the sun on 22 December 1870.

Website created and maintained by Carolyn Sturdy and Christopher Oram on the Orams at Burrishoole.