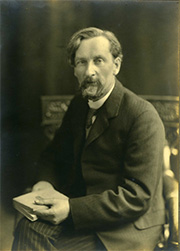 William Patrick Ryan was born in Eliogarty, near Templemore, in County Tipperary on 26 October 1867 to Laurence Ryan and his wife Judy Dwyer. He was the eldest child in a family of three girls and ten boys. In his youth, Ryan became involved in Land League activities. After training locally as a national school teacher, he went to London in 1886 with hopes of becoming a journalist.

He first gained employment in the Pearl Assurance Company but pursued his journalistic ambitions by joining the Southwark Irish Literary Club. In 1891 he obtained a post with the short-lived Irish National Press in Liverpool, and published his first book, The Heart of Tipperary, the following year. In 1893 Ryan became private secretary to Sir Charles Gavan Duffy, who was at that time involved in the New Irish Library, whose aim was to publish Irish texts. This led to the publication of Ryan’s The Irish Literary Revival in 1894. During the following years Ryan wrote for publications such as the New Ireland Review, The Leader, Outlook, and held positions as sub-editor of T.P. O’Connor’s Evening Sun and as literary editor of the Sunday Special.

In 1899, Ryan joined the Gaelic League and was elected secretary of the London branch in 1902. He also became editor of Inis Fáil, a bilingual monthly published by the League. An admirer of Pádraig Pearse, Ryan sent his son Desmond to St Enda’s in Rathfarnham.

1905 saw Ryan move his family back to Ireland and settle in Navan, County Meath, after accepting the position of editor of The Peasant. The following year, Ryan found himself engaged in a confrontation with Cardinal Michael Logue on the subject of lay control of national schools. This confrontation led to the cessation of the official publication of The Peasant, but a resolute Ryan continued to publish the newspaper (later retitled The Irish Nation and Peasant) on his own in Dublin until its collapse in 1910.

During this period, Ryan had become involved in the social aspects of the nationalist struggle, with his newspaper supporting James Larkin’s movement. In early 1911 he returned to London as assistant editor of the left-wing newspaper, the Daily Herald. Here he became one of the foremost labour relations journalists of his time. Ryan personally wrote many of the editorials which engendered support among the English left for the Irish labour movement during the 1913 lockout. After the Trades Union Council took over the Daily Herald he became night editor and his influence gradually waned, although he remained a member of staff until his death.

Throughout his journalistic career, Ryan wrote widely in both English and Irish, having a book published every two years. His correspondence reflects the extent of his writing, which encompassed themes such as theosophy and mythology as well as Irish nationalism and related matters. He wrote several versions of his autobiography, none of which were published.

Ryan married Elizabeth Boyd in London in 1892. They had four children, two of whom died at birth. Although the couple was estranged for many years, the family continued to live together at 15 Kempshott Road, Streatham Common, London. William Patrick Ryan died on 29 December 1942, his wife having passed away the previous year. He was survived by his son Desmond and daughter Maeve.

This collection was amongst the Desmond Ryan Papers (LA10), W.P. Ryan’s son, which were donated to UCD Archives by his widow Sarah in 1975.

Personal material, including photographs, birth certificate and a copy of his will.