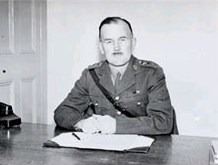 Born in Dunbell, Gowran, County Kilkenny, he matriculated in the National University of Ireland in 1916 and studied medicine for two years. In November 1917 he joined the Irish Volunteers and served with the Dublin Brigade. Entering the National Army in June 1922, he was formally commissioned to the rank of Captain in September 1923. Much of his long military career was spent on the Headquarters Staff, engaged on intelligence work. He succeeded Liam Archer as Chief Staff Officer of G2 [Intelligence Branch] in 1942 and held this crucial position throughout the Emergency years. He was particularly renowned for his cooperation with Richard Hayes, Director of the National Library, in breaking German codes. He transferred to the Military College as Commandant in 1952 and retired from the defence forces in 1955. He had a lifelong interest in the promotion of historical research, particularly military history.

This collection was deposited in UCD Archives in June 1985 by Michael Bryan, Colonel Daniel's brother.

Material relating to his position as a General Headquarters Staff officer and Chief Staff Officer, G2 Branch (Intelligence) concerning defence policy with particular reference to Ireland’s defence preparedness and World War II, and military intelligence and counter-espionage. Includes reports and memoranda on the general work of G2 Branch and on investigations into German nationals resident in Ireland. Reports and memoranda on the global post-war political and military situation and, in particular, Ireland’s relations with the North Atlantic Treaty Organisation (1923–52).

Proposals for an extensive study of the Emergency period by Bryan with specific reference to relations with Germany and German intelligence activities in Ireland; preparatory notes and comments on sources. Correspondence with researchers working on the period and transcripts of interviews given by Bryan to research workers (1950s–80s).

Notes by Bryan and proposals for publication on other research areas of interest to him, mainly contemporary foreign policy and aspects of military history such as the development of military intelligence and British intelligence in Ireland in 1916. Material arising from his membership and involvement with learned societies, particularly the Military History Society of Ireland (1949–82).

Further collections of Colonel Daniel Bryan's material can be found in the Military Archives.