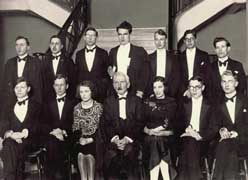 The Literary and Historical Society is a student debating society (known as the L&H) and was founded in 1855–6 by John Henry Newman (1801–90) Rector of the Catholic University of Ireland. It was first known as the Historical, Literary and Aesthetical Society. In its early years, papers and verse compositions were read alternately at meetings by students and professors. Papers alternated with debates into the early part of the twentieth century.

The first formal debate was held in 1858. The society ceased to function in December 1880 and emerged again in November 1882 as the Union Literary Society (until 1883). Many members of the society have gone on to play important roles in public, professional, ecclesiastical, business and judicial life in Ireland. It is significant in the context of the development of UCD as it is one of the few survivors of Newman’s Catholic University.

This collection was transferred to UCD Archives.