Merriam-Webster may have identified “feminism” as its coveted Word of the Year, but there is another term that garnered renewed interest in 2017: rape culture. The outrage and shock that the notorious Harvey Weinstein accusations brought with them not only revived discussions around the term “rape culture”; it brought with it a host of further accusations and a new legitimacy to the statements that anti-rape activists and theorists first made back in the 1970s. Following this outpouring of allegations, we are left to ask: what does rape culture now mean? Has it been redefined? Has it changed? Or is it simply the same as it’s always been, only more mediatised?

This one-day conference aims to reassess how changes in our communicative landscape – consistently advancing and invasive technologies, round-the-clock surveillance, the uptake of social and digital medias as essential life tools – have affected our understandings of rape culture. Through this conference, we propose to analyse the often intersecting ‘alt-right’ and MRA-style ‘shock culture’ responses to feminist ideology and discourse against rape culture and misogyny. Overall, this conference will assess what rape culture means in this new and increasingly mainstreamed, mediatised and technological environment. 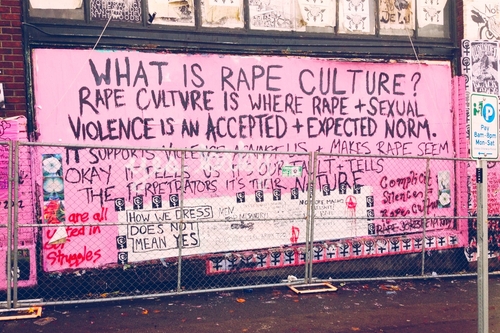