Congratulations to Luke Prendergast, ESAI Postgraduate Researcher of the Year 2015 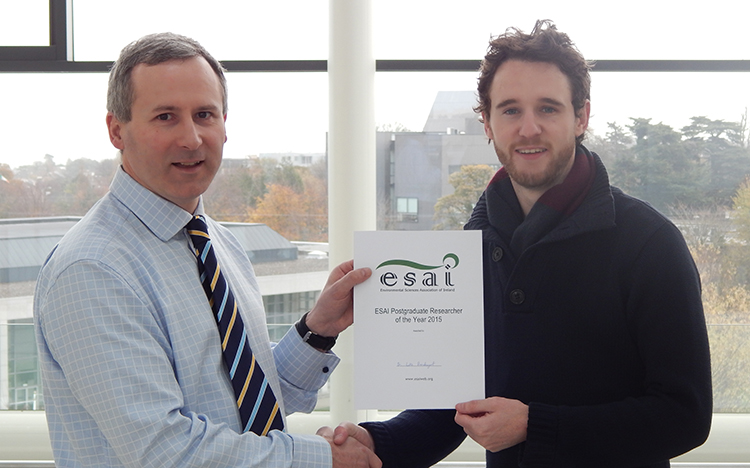 Congratulations to Dr. Luke J. Prendergast from University College Dublin (UCD) who has been awarded the 2015 ESAI Postgraduate Researcher of the Year by the Environmental Sciences Association of Ireland. The winner of this prestigious annual award receives a prize of €500. Luke has just finished his PhD thesis entitled “Monitoring of scour around structures using changes in natural frequency of vibration”, an inter-disciplinary effort combining both structural dynamics and geotechnical engineering. He undertook the research in UCD School of Civil Engineering under the Earth and Natural Sciences PhD Programme as funded by the Higher Education Authority (HEA). He was supervised by Dr. Kenneth Gavin, Lead PI of the Geotechnical Research Group at UCD. He is now working as a Post-Doctoral Researcher in the UCD Centre for Critical Infrastructure Research (CCIR) under the continued mentorship of Dr. Gavin. He graduated from Civil & Environmental Engineering at University College Cork (UCC) in 2011.

Luke’s research pertains to the detection and monitoring of flood-induced scour (soil erosion) which occurs around bridge foundations (and offshore wind turbine foundations due to wave and tidal actions). Scour erosion can occur very rapidly even under relatively benign flow conditions and can lead to sudden structural failure, even total collapse. It is the number one cause of failure of bridges located over waterways worldwide and is becoming quite prevalent due to increased flooding frequency as a result of climate change. Traditionally, this phenomenon was monitored using divers who would measure the depth of scour around foundations using relatively crude instrumentation. This practice is both dangerous and misleading as it cannot be carried out during high flood flows when the risk of erosion is highest. As scour typically occurs quite rapidly, it is also of limited effectiveness to use divers as it is not possible to undertake assessments at the required frequency to ensure continued safe operation of the structures under investigation. Other methods that have been developed use instrumentation that can be embedded into the streambed at the location of scour interest, which measure the depth of scour using a variety of mechanical and electrical systems.

Recognising that scour erosion results in a loss in the stiffness of a foundation system, Luke’s method relies on this stiffness loss manifesting itself as a change in the modal (dynamic) properties of the structure. His research has focussed particularly on using the natural frequency of vibration of the structure as an indicator of the presence of scour since increased stiffness loss due to scour results in a reduction in the structure’s frequency of vibration. The method, therefore, only requires the installation of vibration sensors (accelerometers) onto the structure of interest which can monitor the changes in the vibration characteristics. This could be particularly effective if undertaken before and after a major flood, for example, and could afford infrastructure managers the tools required to safely close a bridge before catastrophic collapse.