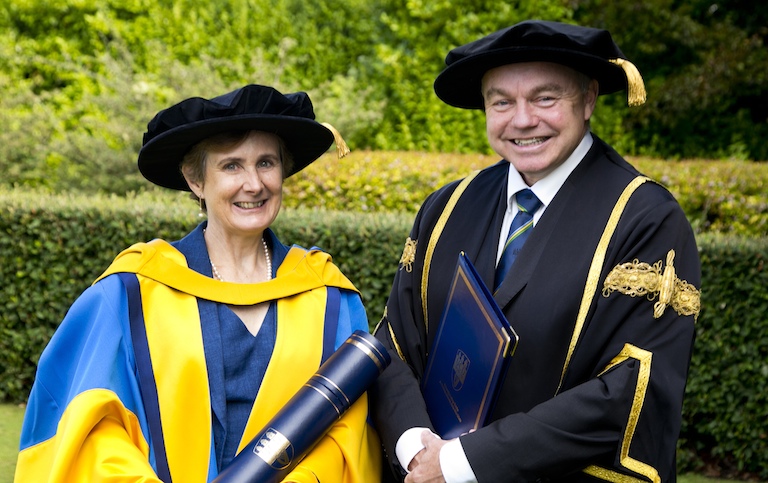 Board member and trustee of Arup, the engineering company that first came to the world’s attention with the structural design of the Sydney Opera House in the 1950s, Dervilla Mitchell CBE has been awarded an honorary Degree of Doctor of Science by UCD.

Mitchell was Arup’s design management lead for Heathrow Airport’s Terminal 5 project (2000 – 2006), the largest construction project in Europe at the time. She is currently the company’s project director on the £2 billion Abu Dhabi Midfield terminal development.

Mitchell became an Honorary Commander of the British Empire in December 2014. She is a member of the Council for Science and Technology that advises the British Prime Minister on science and technology policy.

A Fellow of Engineers Ireland, the Institution of Civil Engineersand Royal Academy of Engineering, she graduated from University College Dublin with a BSc Engineering in 1980. She was one of only four women in a graduating year of 200. Mitchell is now Arup’s most senior female professional.

“Dervilla is an exceptional role model for those considering a career in engineering and for engineering graduates aspiring to achieve excellence and distinction,” said Associate Professor Amanda Gibney, Vice Principal for Teaching and Learning, UCD College of Engineering and Architecture.

“She is strongly of the opinion that a solid technical basis is a key building block in the making of a successful career, the foundations of which were developed through her studies here at UCD.”

Mitchell has been committed to addressing the gender balance in science, engineering and technology during her career. She is the current Chair of the Royal Academy of Engineering Diversity Committee. Mitchell was a founding member of Arup’s Diversity Steering Group and played an important role in establishing Arup’s women’s network, Connect Women.

In 2014, Engineers Ireland awarded Mitchell with the ESB Outstanding Contribution to Engineering Award. In 2011, she received the Women of Outstanding Achievement Award for Inspiration and Leadership in Business and Industry.