Choirs unite in tribute to cancer community in Ireland

To mark the 20th anniversary of World Cancer Day, more than 300 singers gathered in O’Reilly Hall, UCD on Tuesday, 4th February in a community tribute to those whose lives have been touched by cancer. Now in its second year, the ‘Choirs for Cancer’ initiative brought together cancer patients, advocates, survivors and family members to share the story of their cancer journey. 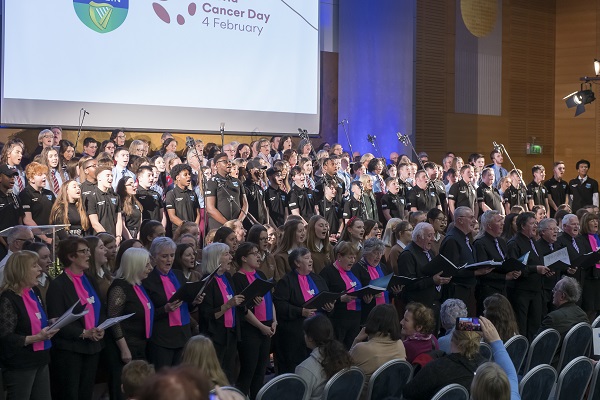 Cancer researchers spoke of their motivation and progress towards finding new ways to prevent, diagnose and treat this devastating disease. These stories were interspersed with inspirational songs by 10 choirs from across the island of Ireland, many linked with cancer support centres or cancer fundraising efforts.

‘Choirs for Cancer’ also recognised the tireless work of patient advocates around Ireland, including cervical cancer campaigner, Stephen Teap who spoke about losing his wife, Irene to this disease in 2017.

Each choir sang a song with a special meaning to them on the themes of care, hope, strength, love, loss and community, followed by a combined choral performance of ‘Something Inside So Strong’. 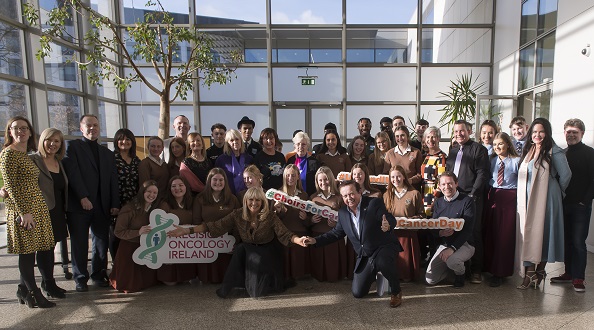 Organiser Prof. William Gallagher, Deputy Director of Precision Oncology Ireland said, “The ‘Choirs for Cancer 2020’ event provides a fantastic opportunity for those impacted by cancer to tell their story, and for their collective voice to be heard.”

RTE broadcasters, Miriam O'Callaghan and Marty Morrissey hosted the ‘Choirs for Cancer’ event, which is jointly organised by Precision Oncology Ireland and The Patient Voice in Cancer Research.
Professor Amanda McCann spoke about The Patient Voice in Cancer Research initiative while Barbara Hughes and Elaine Quinn (UCD Conway Institute) represented the initiative at a dedicated stand in the exhibition area.
Earlier in the day, the Mount Sion choir visited UCD Conway Institute for an impromptu busking session in the foyer for Institute researchers and staff to celecbate World Cancer Day 2020.