UCD Conway SPHERE, launched in September 2015, is an interdisciplinary research group that works towards the understanding of a myriad of inflammatory diseases. Our group brings together clinical, academic and scientific collaborators nationally and internationally; harnessing unique tools to diagnose and understand a host of diseases, including thrombotic disorders. The acronym SPHERE describes the state-of the art translational interests of our group; “Systemic inflammatory disorders: role of blood Particles, Haemostatic factors and ExtRacEllular vesicles”.

Led by co-Directors Prof. Patricia Maguire and Prof. Fionnuala Ní Áinle, our group is based across several distinct research, academic and clinical centres in Dublin, Ireland under the umbrella of University College Dublin. 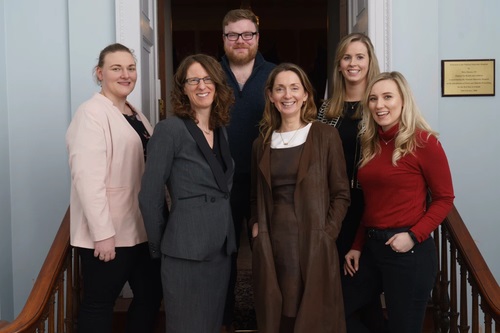 Our partner centres include;

We are delighted to have a variety of funders and sponsors both from state bodies and from industry and we thank them for their continued support.

For further information about members of the group, our research and our publications, please follow the links below. 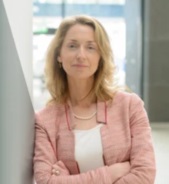 Patricia Maguire is Professor of Biochemistry in the School of Biomolecular & Biomedical Science and Principal Investigator and Fellow at the UCD Conway Institute. Together with Prof Fionnuala Ní Áinle, Patricia co-directs the UCD Conway SPHERE group which uses unique tools to diagnose and understand a host of inflammatory-based diseases, including Early-onset Preeclampsia, Multiple Sclerosis, and Venous ThromboEmbolism. The Conway SPHERE group have recently developed a new non-invasive blood-based diagnostics platform PALADIN (PlAteLet bAsed DIagNostics) that harnesses the power of platelets to uncover the secrets of disease. Through the ‘100 Platelet Releasate Project’ (100PREPS), the Conway SPHERE team have built a large internal database of disease-specific data, with the IP generating notable impact with multinational industry.

Patricia is also Director of the UCD Institute for Discovery, where the mission is to build & cultivate interdisciplinary connections across the UCD research community through initiatives around emerging areas/technologies, e.g., ‘AI for good’, ‘Plotting the Future’ and ‘Data for Healthcare’. She is also a member of the UCD Extended Leadership Group, central to the governance/decision making in UCD. 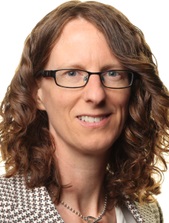 Prof Fionnuala Ní Ainle is a Consultant Haematologist at the Mater Misericordiae University Hospital (MMUH) and Rotunda Maternity Hospital, Dublin. She is also a Full Clinical Professor of Haematology in the School of Medicine, UCD. She is privileged to treat patients affected with thrombosis and has a strong interest in women’s issues in thrombosis and haemostasis. She acts as Chair of her Hospital and Regional venous thromboembolism (VTE) committees and is a founder member of VTE Ireland, a National Clinical VTE Working Group. She is co-organizer of the VTE Dublin thrombosis conference. 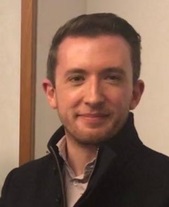 Dr Barry Kevane completed undergraduate medical training in 2008 (MB, BCh, BAO; University College Cork) and following completion of initial postgraduate training in general internal medicine in 2011 (MRCPI; Royal College of Physicians of Ireland), he commenced higher specialist training in Haematology.  During the course of his Haematology training, Dr Kevane undertook a period of full-time clinical and translational research in the UCD Conway SPHERE Research Group, leading to the award of a PhD in translational medicine in 2017 (University College Dublin).  Having completed higher specialist training in Haematology in 2018, he was appointed to a consultant post at the National Coagulation Centre in St James’s Hospital, Dublin.  He was subsequently appointed to his current post of Consultant Haematologist with specialist interest in venous thromboembolism at the Mater Misericordiae University Hospital and Ireland East Hospital Group in September 2019. Dr Kevane is also a collaborative clinician on the EXCLAIM study. 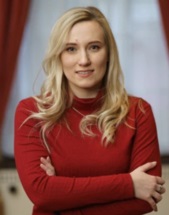 Paulina is a senior research fellow in the group. She graduated from UCD with a BSc (Hons) in Biochemistry and Molecular Biology in 2013  and with a PhD in Biochemistry in 2018. Paulina completed her PhD in the SPHERE research group. Her PhD research focused on biomarker identification through platelet releasate proteomics. In her current position, Paulina is focusing on utilising platelet and extracellular vesicle proteomics coupled with artificial intelligence to calculate risks for inflammatory disorders including cardiovascular disease, preeclampsia and multiple sclerosis. 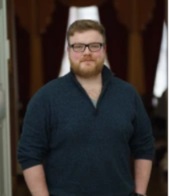 Shane joined the SPHERE research group as the Sanofi Newman Fellow in Haematology in October 2019. Shane graduated from UCD with a BSc (Hons) in physiology in 2014 and read immunology at TCD, graduating with an MSc in 2015. Shane completed his PhD in the olecular haemostasis research group in UCD School o f Medicine in 2019 under the supervision of Assoc Prof Albert Smolenski MD. His PhD research focused on the regulation of platelet activity by cyclic nucleotide signalling pathways. Shane also maintains a strong interest in science communication and outreach, participating in numerous initiatives both locally and nationally.  In the SPHERE group, Shane is working on the EXCLAIM study, investigating the impact of obesity on the anti-coagulant and anti-inflammatory effects of enoxaparin in HA-VTE patients. 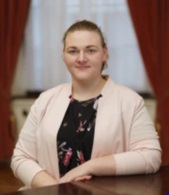 Luisa graduated from Fresenius University, Idstein, Germany, with a BSc (Hons) in Bioanalytical Science and Haematology in 2017, followed by an MSc in Biomolecular and Biomedical Science in UCD, graduating in 2018. Luisa joined the group in January 2018 to conduct research for her MSc thesis, developing a method for EV enrichment by size exclusion chromatography. In her PhD project, Luisa is investigating circulating extracellular vesicles in patients with cardiovascular disease. 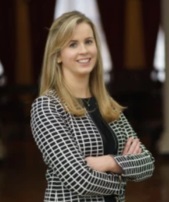 Claire started her MD (July 2019) with the SPHERE research group. She graduated from Trinity College Dublin with an Honours Degree in Medicine in 2013. She is a Specialist Registrar on the Irish Neonatal Higher Specialist Training Scheme. She was awarded a Clinical Research Fellowship through the National Children’s Research Centre to undertake her MD research project. This is a major research project being carried out in the Rotunda Hospital, Dublin in neonatal clotting and extracellular vesicles in preterm infants as part of her MD thesis.

Daniel graduated from Human Health and Disease in Trinity College Dublin in 2013, and Medicine in RCSI in 2017. He originally joined the group in 2018 as part of the academic track internship program and is currently working on platelet biology on neonates as part of his MSc. in Child Health and Paediatrics in Imperial College London alongside his clinical posts as a BST trainee in paediatrics.

The UCD Conway SPHERE group regularly hosts visiting students and researchers from other labs, both nationally and internationally. Please contact us for further information.

UCD Conway SPHERE is an interdisciplinary research group where people with a diverse range of skills are working on numerous projects with common themes throughout. Below is a list of the current, ongoing projects within our group.

The Cocoon Study is an international project which will examine blood coagulation in Covid-19 patients and its interplay with inflammation. Using advanced artificial intelligence and genomics technologies, the project will deliver enhanced thrombotic prevention strategies and a rapid diagnostic platform for personalised risk assessment. The study aims to address urgent clinical dilemmas and to develop novel solutions for existing diagnostic and therapeutic challenges. 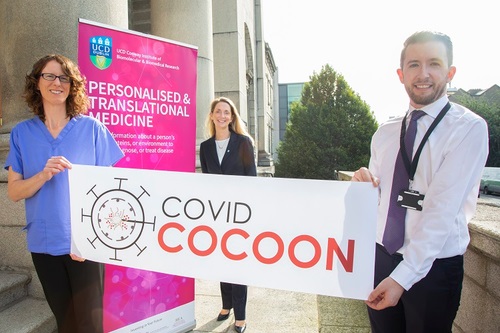 The team aims to characterise the mechanisms driving hypercoagulability in Covid-19 and determine whether current standard thrombosis prevention measures sufficiently attenuate Covid-19 hypercoagulability. Achieving these aims will address the controversy surrounding optimal dosing of anti-thrombotics in Covid-19 and will also determine if other means of thrombosis prevention (such as anti-platelet therapy) may be of benefit.

Advanced proteomic analysis of plasma samples taken from across the spectrum of severity of infection will permit the identification of novel biomarkers which will be of superior specificity in comparison to existing markers (e.g. D-dimer). This will address the current limitations in this regard. In particular, analysis of platelet releasate (PR) in Covid-19 is predicted to yield valuable data – the UCD Conway SPHERE team have previously demonstrated that the proteomic signature of the PR is highly conserved among healthy individuals but can act as a ‘barcode for disease’ in multiple pathological states.

This novel and disruptive approach to risk stratification will arm clinicians with an affordable tool to channel resources appropriately and prevent unnecessary adverse outcomes through prevention of thrombotic complications. In collaboration with their international partners, the researchers believe that their approach will rapidly shape international clinical practice. More information can be found here.

Preeclampsia (PET) is a condition of pregnancy that is difficult tto diagnose and kills 50,000 mothers and 500,000 babies globally every year. At present delivery of the pre-term baby is the only treatment and the safest option for the mother. But pre-term delivery can lead to long-term neurodevelopmental problems and even death. ConwaySPHERE is working to develop a new diagnostic test called AI PREMie to better predict PET severity and help save lives of both mothers and their babies. 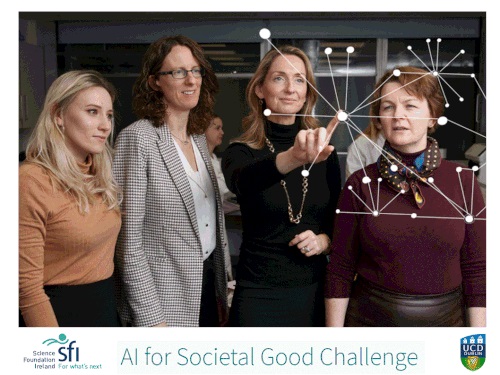 AI PREMie is a risk stratification tool which identifies women with PET - and also how the condition will progress. Our AI PREMie tool assesses the pre-eclampsia risk based on circulating biomarkers in the plasma of pregnant mothers. This will give clinicians and other caregivers the opportunity to proactively plan pregnancies for at risk mothers, giving a clearer understanding if planning for delivery is necessary or if the baby can stay in utero allowing for further development as every day in utero counts.

The UCD Conway SPHERE team (Lead RPO) have developed a new blood-based innovative diagnostics platform PALADINTM (PlAteLet bAsed DIagNostics) that captures the power of the platelet releasate and uses advanced proteomics methods, state-of-the-art equipment and artificial intelligence to uncover useful molecular diagnostics for chronic disease. PALADINTM addresses the unmet need for an easily accessible, minimally invasive source for high-quality specific molecular biomarkers in numerous diseases. In contrary to most often used biofluids with very high dynamic range such as plasma or serum, PALADINTM harnesses the power of platelets which act as a natural ‘sieve’ and pick out important messages. Therefore, by analysing the platelet releasate the problem of highly abundant plasma proteins is resolved.

Rivaroxaban is a direct oral anticoagulant that has similar efficacy to warfarin in management of non-valvular atrial fibrillation (NVAF) and venous thromboembolism (VTE) and is currently prescribed in preference to warfarin. Rivaroxaban inhibits activated factor X (FXa), which converts prothrombin to thrombin. However, thrombin and FXa also mediate pro-inflammatory signalling, leading to further activation of coagulation. Recent studies revealed that Rivaroxaban downregulated pro-inflammatory protein expression and reduced complement activation, while warfarin failed to do so. Therefore, long-term inhibition of FXa may confer additional benefits that are unrelated to Rivaroxaban’s anticoagulant function but rather, are mediated by inhibition of pro-inflammatory signalling. Extracellular vesicles (EVs) are pro-inflammatory mediators that regulate many physiological and pathological processes. It is likely that the well-characterized anti-inflammatory effects of Rivaroxaban will be mirrored by similar effects upon plasma EVs. The RIVEVE study aims to characterize the influence of Rivaroxaban upon circulating pro-inflammatory EVs using a combination of single vesicle analysis and proteomics.

Preeclampsia (defined as new hypertension presenting after 20 weeks gestation with significant proteinuria) is a serious complication of pregnancy with potentially life-threatening consequences for both mother and baby. It is a major public health issue and a leading cause of death in the UK/Ireland. At present, preeclampsia diagnosis relies on error-prone techniques, furthermore the delivery of the preterm infant is the only curative treatment.  However, preterm delivery is associated with significant risk of foetal morbidity and mortality, especially in preterm births and even minor improvements in length of gestation at delivery confer significant survival benefits, therefore every day in utero counts. Using the PALADINTM platform, we have discovered candidate biomarkers that distinguish patients with preeclampsia from healthy pregnant women and that have the potential to calculate the risk of developing severe preeclampsia and whose preterm delivery can be delayed. Currently we are working on translating this research to an easier to use, plasma-based platform.

Read about recent news from the UCD Conway SPHERE group by clicking the links below:

Publications by UCD Conway SPHERE directors and group include: