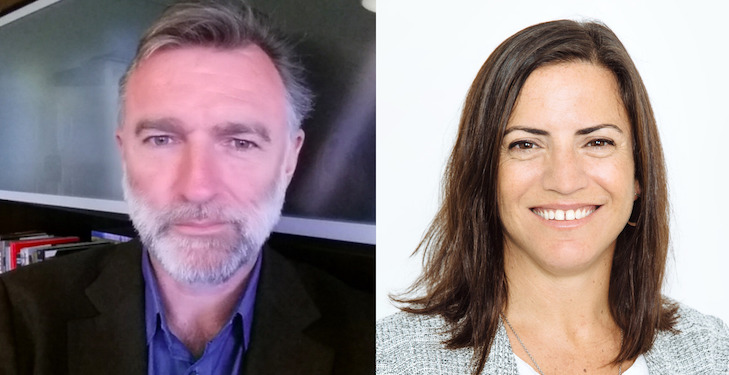 In his recent Bulletin #269 UCD President Prof. Andrew Deeks congratulated Prof. Liam Kennedy and Dr. Dolores Resano for their Marie Curie Fellowship grant of €257,561.28 from HORIZON 2020 for a project entitled Transatlantic Approaches to Contemporary Literature in the Era of Trump.  Here we look at what Dr. Resano calls the “crucial” part UCD Institute for Discovery played in her remarkable success at UCD Clinton Institute for American Studies.

Three short years ago Dr. Dolores (Lola) Resano was preparing to defend her PhD thesis and “wanted to pursue an academic career and didn’t know how”.  It is perhaps fair to say she was feeling disillusioned. “I was in Barcelona University and you think that after the PhD comes the cliff; the job market, et cetera.” Yet today UCD Clinton Institute Director Prof. Liam Kennedy describes Dr. Resano as a “leading voice” in her interdisciplinary fields of research - Trump-era literature, culture and politics. Her Marie Curie fellowship has partnered Dr. Resano with Ivy League Dartmouth College in the US for two years from October where, Prof. Kennedy adds, she will be “the beating heart” of a research group of “leading scholars” in its American Studies department.

Far from encountering a cliff, Dr. Resano’s postdoctoral career is on a rapid upward trajectory. Her secret?  “I can say that in terms of my career right now I am where I am because of the UCD Institute for Discovery,” she says, simply.

A fortuitous chain of events began when Discovery Engagement Manager Dr. Elva O’Sullivan attended a 2017 migration workshop organised by UCD Research Partner Justin Synnott. “He had people from all different walks of life in the room to talk about the migration issue and I was put into a group that included Liam Kennedy,” says Dr. O’Sullivan. “Liam mentioned that he had a Trump website in the making. I knew Dolores and that her research area was contemporary American literature and politics. Even though she was living and working in Barcelona I am a lateral thinker and I saw the opportunity.”

“The career advice I got at the UCD Institute for Discovery was really illuminating,” says Dr Resano.

The Discovery team helped her to “polish” her Trump project abstract and introduced her to Prof. Kennedy and potential funding avenues.  “This is another thing that Elva does so well,” says Dr. Resano. “She knows how to connect people. She sees these connections that we might not see. Prof. Kennedy was interested when he saw my project because it was so relevant to what he was working on.”

Dr. Resano’s current research tries to make sense of the contemporary by looking at fiction and its potential to intervene politically in the Trump era; going forward her research will expand on this but from a transatlantic viewpoint. She is sure that the interdisciplinary nature of her research was a “key element” in securing her initial IRC funding. “It is something they are always looking for,” she explains. “Not that everybody has to be interdisciplinary but extra points were there."

Upon arrival in Dublin, UCD Discovery continued to support Dr Resano in her new role at the Clinton Institute under the supervision of Prof. Kennedy, whose project Atlantic Disruptions looks at changes to the Irish-US relationship politically, economically, socially and culturally.

“The Institute was very helpful as we were going forward,” says Prof. Kennedy. “The Discovery Global Visiting Fellowship was invaluable in that it gave us the opportunity to bring one of America’s leading authors, Aleksandar Hemon, who is also of Eastern European descent, from Sarajevo, to Ireland.”

The Lazarus Project author has been described by Colum McCann as “quite frankly the greatest writer of our generation”. Through the Discovery Global Visiting Fellowship Program Prof. Hemon was the invited keynote at the international Alternative Realities conference held in December 2019. Additionally UCD Discovery and Dr. Resano co-organised the closing event in the Museum of Literature Ireland (MoLI) which was open to the public. The conference explored how literature has responded to recent changes in political culture with the rise in populism, partisanship and nationalism in the United States and on this side of the Atlantic too.

“To have Hemon engage with the conference, to engage with Lola, to do an interview with myself - all of that was a marvellous addition to what we were trying to achieve,” says Prof. Kennedy.  “With Lola’s work, that has mushroomed utterly and the Marie Curie itself is a fantastic outcome of the work that she has done and which Discovery has helped,”  says Prof. Kennedy. “This is a very distinguished fellowship. We’re very proud of Lola for her work in putting together a successful application; it’s a very challenging thing to do. It’s a very good thing for the UCD Clinton Institute and I think for UCD more broadly. That is now bringing in the folks from Dartmouth College and I think there she will also be running events that will bring in more people.”

Dr. Resano’s work will be enriched by these connections when she returns to UCD for the third year of the fellowship in 2022. “She is going to be authoring an edited book which will be an outcome from the work she has done at UCD,” says Prof. Kennedy.  “A lot of that is based on a conference that UCD Discovery made possible. There’s a lot there that’s still moving forward.”

Dr. Resano adds: “Basically I am on this path now because I got excellent support from the UCD Institute for Discovery. I can say that with no doubt!”

This article was brought to you by the UCD Institute for Discovery - fuelling interdisciplinary research collaborations in UCD.