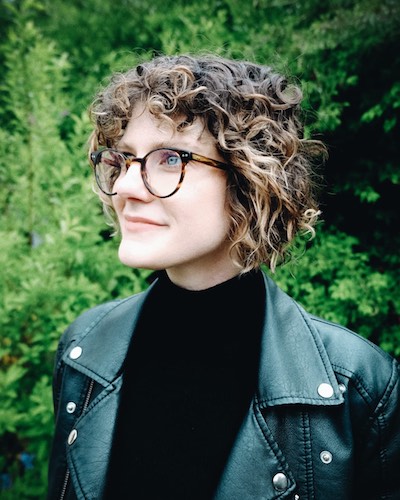 Dr Katie Mishler (pictured above) is a postdoctoral researcher in the UCD Centre for Cultural Analytics. She was recently awarded €91,910 for a project entitled, Mapping Gothic Dublin: Historical and Literary Hauntings 1820-1900. This is an Irish Research Council Enterprise Partnership scheme with the Museum of Literature Ireland (MoLI).

With his voluminous cape and witchy conical hat, writer James Clarence Mangan cut quite the dash around 1800s Dublin.

“He called himself The Man in the Cloak. Apparently he had a shock of white hair and green spectacles as well, so he was really an eccentric character. He was the librarian at Trinity College for a period of time and apparently would appear like a ghost in front of you,” says Katie, whose work explores the role of Dublin city in shaping gothic Irish writing from 1820 to 1900. With the Museum of Literature Ireland (MoLI) she is also developing an interdisciplinary podcast series on the subject, called the Dublin Gothic Podcast, with guests expert in art history, architectural history, ethics, natural history, publishing, psychology and more.

Aside from Mangan, the other authors whose work Katie looks at are Charles Maturin - whose literary creation Melmoth the Wanderer inspired Mangan’s curious fashions - Joseph Sheridan Le Fanu, Oscar Wilde and Bram Stoker.

Le Fanu, like the cloaked Mangan, also had something of a spooky reputation around town.

“He lived on Merrion Square and was known as the Invisible Prince because he was so reclusive. After his wife died he became quite withdrawn from society. There are some really great urban legends about him in Dublin, which are probably exaggerated but they are quite fun. They said that he wouldn't leave his house except under nightfall to go to the booksellers at the periphery of the city to read ghost stories and to read up on the occult and demonology. The story is he would just appear at these booksellers and say, ‘Do you have a ghost story for me?’”

Le Fanu is best known for two works; Uncle Silas, a “locked-room mystery novel set in Derbyshire” and the vampire novella “Carmilla”, “which is a precursor to Dracula”. But Katie is looking at his short stories which take place in Dublin or are focused on the concerns of his native city. MoLI recorded an abridged version of one of these, "The Familiar", with actor Michael James Ford, and released it as a Christmas ghost story on their website.  Set in Dublin and published in 1847, the narrator hears footsteps following him through the eerie, half-built streets of eighteenth-century Dublin.

“My research looks specifically at the urban environment. All of these authors are native Dubliners, all of them lived in Dublin and engaged with the social, intellectual and artistic circles of 19th century Dublin to varying degrees.”

Dublin gothic “gets overlooked quite a bit” in favour of London, Paris, New York and, more recently, New Orleans gothic. Katie wants to “bring Dublin into the discussion when we talk about urban gothic critically”.

As gothic settings go, Ireland in the nineteenth century provided quite the dramatic, unsettling backdrop, with land wars, rebellions, Catholic emancipation, the Great Famine and the fractious campaign for Home Rule.

“It was a time of intense social change. One thing that gothic does is it takes social anxieties and dramatises them, expressing them in different forms of terror and horror. For example, some people have read Bram Stoker's Dracula as an expression of anxieties over land agitation. So, Count Dracula emerges as a bloodsucking landlord.”

Dublin was built primarily in the 18th century as an elegant second capital of the British Empire. But the Act of Union in 1801 was followed by a mass exodus of politicians, landed gentry and the social elite back to London and Dublin entered a state of economic and social decline.

“As you go on through the 19th century these grand houses that were built for this resident Dublin aristocracy are now being turned into slums and tenements. There were major changes in the social fabric of the city at this time.”

Both Bram Stoker and Oscar Wilde - the best known of the five novelists whose work Katie is examining - lived in London and set most of their writing there.

But the pair knew each other in Dublin first, not least because Stoker’s wife Florence Balcombe was originally courted by Wilde. Both writers were also regulars at Wilde's mother Speranza’s literary salon at her house in Merrion Square.

“They may have moved to London but they were native Dubliners. I’m looking at how even though Stoker’s Dracula and Wilde’s The Picture of Dorian Gray take place in London, they are influenced by Dublin. I’m looking at how they reflect some of the preoccupations and anxieties prevalent in Dublin at this time. I am trying to reclaim them as Dublin-based writers, essentially.”

Katie hopes her work will introduce the lesser known Mangan, Maturin and Le Fanu to a wider audience, while reminding people of Wilde and Stoker’s Irish heritage.

“I want people to think about them specifically as Dubliners. There was a time when I would regularly see Dracula listed as a British gothic classic and a lot of people have done important work on reclaiming Stoker as an Irish writer. I want people to also think of him as a Dubliner and to think about these five men as people who engaged with our city, who walked around our city, who were steeped in our city. I really want to bring that to the fore when we think about them.”

Now, in collaboration with MoLI, Katie is in the process of curating an online exhibition on Gothic Dublin, to be launched in Winter 2021, which will explore the work of each author through archival, video and audio content.

“This is primarily a public engagement project and I want my research to encourage people to think about how they engage with public spaces that have a historical and literary significance. The city is both a historical reality and an imaginative space and the act of writing Dublin in gothic literature creates different versions of the city which in turn haunt each other. Landmarks, streets, and monuments connect the city of the past to the city of the present.”