The Future of FinTech in Ireland 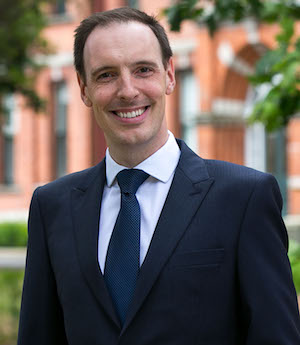 Thomas Conlon is Associate Professor of Banking and Finance in the UCD School of Business. He previously worked in asset management and as a financial services consultant. Recently he received €177,000 from Science Foundation Ireland for a project entitled FinTech.

When was the last time you handled cold, hard cash? Chances are it was a year ago, before grubby notes and coins became a potential health hazard.

“What we've seen since COVID-19 came in is that the coins and notes we have in our pockets are disappearing and instead we go to the shop, take out a card, tap it, and that’s it. Cryptocurrency is the next level of that,” predicts Conlon, explaining that instead of having euro or dollars in our accounts, we will hold Bitcoin or an equivalent.

“It might be the case that we're going to have Central Bank-issued cryptocurrency in the near future. There has been lots of talk about that.”

Part of Conlon’s research looks at the reasons why people use such cryptocurrencies.

“One of the things that people put forward a lot of the time is that they hold Bitcoin as a safe haven. So if everything else goes wrong Bitcoin is an asset that will hold its own. But the first real chance for Bitcoin to actually show its worth in this regard happened last year with the Covid crisis. In March/April stock markets dropped by about 20-22% - the first bear market (when share prices are falling) that we'd seen in about the last 10 years. And what we saw was that Bitcoin didn't do what it was supposed to do. It actually fell by about 50%. So if you put some of your money into it, in fact you ended up poorer. It's hard for the average investor who isn't very risk-seeking to get involved in something like that.”

Bitcoin has been in the news - and lighting up the internet - in recent weeks. When Elon Musk’s company Tesla announced in early February that it had bought $1.5b worth of Bitcoin, “the price shot up quite significantly. But what we’ve seen is that there have been a lot of events over the last ten years where Bitcoin drops by 50%”.

Instead of being that safe haven for investors in the early days, Bitcoin has proven to be “extremely volatile; it bounces around a lot. Bitcoin does a very good job itself of getting bad press”. Though up an astonishing 60% on last year’s price, it plummeted by 17% overnight on February 22nd when sky-high valuations triggered a sell-off across cryptocurrency markets.

If that’s not enough to make you wary, there have been high profile thefts, too.

“Yes, that's absolutely a problem,” confirms Conlon - and some $1.1 billion worth of cryptocurrency was stolen in the first half of 2018 alone.

With his SFI funding, Conlon will focus on three different areas that he believes are the future of FinTech: Regulation Technology (Regtech), Pay Technology (Paytech) and Insure Technology (Insurtech).

RegTech looks at ways of taking the man hours out of compliance for financial institutions. Instead of hiring lawyers to pore over documents, “FinTech allows machines to do that for them using Natural Language Processing to look for problems and ensure compliance with financial regulations”.

He adds that JP Morgan is saving “hundreds of millions of dollars by replacing people with machines doing this kind of work”.

Paytech refers to every time you pay for something - or transfer funds - without physically touching money. Revolut is a high profile example of a Paytech company.

“Paytech companies try to democratise financial transactions by allowing us to easily transfer money to foreign currencies without paying the huge fees. That’s where it’s going to be very costly for banks because this was a real profit centre for them that has been eroded by FinTechs like Revolut.”

But traditional banks have the advantage of being able to lend money and arrange mortgages.

“When banks lend you money, that money comes back to them some way or other, and they’re able to lend on the basis of that again. So effectively they're able to become very leveraged, they're able to increase the amount of money that's in the system. And that's not something that FinTechs can actually do.”

Insuretech refers to the use of technology innovations to make premiums more bespoke products.

“Putting sensors on cars that allow the insurance company to be able to price your premium based upon the way you drive is an example of Insuretech that hasn’t happened yet. That would be one way that you could incentivise young drivers, particularly, to be able to get cheaper premiums. People aren’t too keen on it for many reasons,” he concedes, of snooping software that can both reward and penalise.

FinTech is growing in Ireland despite some sluggishness in the sector as a result of the 2008 banking crisis.

“There's no reason why it couldn't be stronger given how people say that FinTech is 80% tech, 20% finance. We're very strong in tech in Ireland and we should be able to try and take advantage of that to support more FinTech companies, creating jobs and competing globally.”