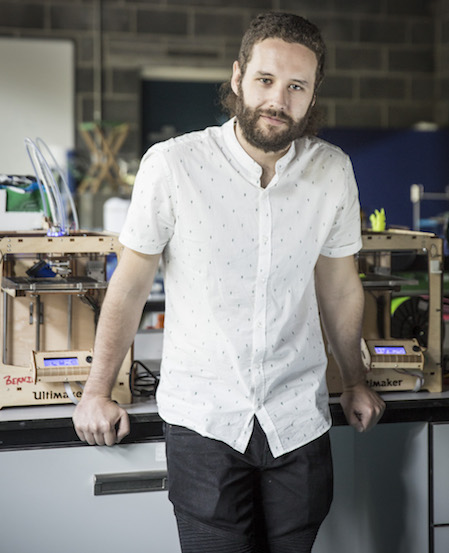 At UCD Institute for Discovery our mission is to foster interdisciplinary research and cultivate community. The search for solutions to the Covid-19 crisis could not be more transdisciplinary, uniting researchers, designers, doctors and makers the world over. One of these is award-winning engineer Colin Keogh, 31, who is leading the development of an open-source 3D printed ventilator that could potentially address shortages and save lives. In 2017 he was listed in Forbes 30 under 30 in science and healthcare and this year he completed his Engineering PhD in Creative Technology Innovation at UCD.

Colin Keogh admits that designing something you hope is never used is “a really strange position to be in”.

But then again, these are really strange times.

Across the world the Covid-19 lockdown continues in an effort to stem the surge of critically ill people needing hospital ICU care.

Some 6% of people who catch the virus develop  serious respiratory disease and pneumonia and the only way to treat them is with ventilators.

These breathing machines are, quite literally, a matter of life and death. And with Coronavirus cases skyrocketing comes the very real concern that there won’t be enough to go around.  This is where Keogh’s 3D ventilators come in.

“First of all, I don’t want there to be a need for them anywhere,” he clarifies, when we speak this week.

“We’re trying to design a last ditch emergency ventilator to be used when you don’t have any other option. So hopefully we never see them used anywhere in the world.”

But reports have already emerged from Italy and Spain of scarce ventilators being reserved for patients under sixty who stand a better chance of survival. In New York doctors at Columbia University Irving Medical Center have two patients a time on some ventilators. India only has an estimated 48,000 ventilators for its population of 1.3bn. It is a very real possibility that Irish-made 3D printed versions could be needed somewhere - and soon.

Keogh already has six concepts ready to be prototyped and tested with validation to be sought as soon as possible by the HSE and other global health systems.

“I’d be confident enough that we’d never have to use it in Ireland but I can’t say the same for many of the developing countries around the world, countries that have been less proactive in trying to stop it. So we’d like to have something ready but ideally we’d never want to use it. But in a worst case scenario in three or four weeks’ time if there’s a huge call for these in South America, we’d like to have at least learned a huge amount and have a couple of weeks into the development process and not have to start from cold.”

That development process began on March 15th when Keogh was tagged in a Facebook post set up by Gui Cavalcanti, a US technology company founder, who had set up a group trying to develop open source ventilators. Open source refers to when the original software code is made freely available for redistributing and modifying by others.

“So I joined the group, I helped them promote it, it grew massively and in growing massively it gathered an awful lot of attention.”

That attention brought together an interdisciplinary team of volunteers around the world working “day and night” to develop a simple, reliable and easy-to-assemble ventilator that consists mostly of easy-to-source or 3D-printed parts.

“We set up opensourceventilator.ie and that then acted as a focal point for an awful lot of people to roll in and help.”

They have had over five thousand expressions of interest and more than two thousand people on a Slack channel offering design ideas.

“We’ve built a functional engineering team that is spread out all around the world. Specialists in engineering, advanced manufacturing. We have an awful lot of clinicians, anaesthesiologists, ER doctors, coders, developers. Anything and everything is in that group working together to try and make some sort of viable open source 3d printed or traditionally manufactured ventilator system,” he says.

“We’ve had connections and offers of support from some of the biggest companies and organisations in the world. People have been sharing their experiences, their expertise, their knowledge. It’s been excellent so far. It has grown superfast in the space of two weeks.”

Though buoyed by the support, he is cognisant of how daunting the challenge is.

“In reality we’re trying to do what would probably take a team of 200 professional engineers four or five years to do and we’re trying to do that in the space of a matter of weeks, all remotely. So we’re aware of the difficulties and the complexity of it but we have to at least try. l mean, in the worst scenario we’ve generated a huge amount of information and support and if we don’t succeed at least it will help support someone else to succeed.”

“We’ve been using them for years now from high-end scientific research to prototyping parts for companies to designing machines to using them for the humanitarian work we do.”

The pair set up the Rapid Foundation in 2014, which donates 3D printers and training to developing countries.

“We have a project in Kenya now that’s looking at marine waste and using recovered plastic from the beaches to turn it into 3D printing material so the locals can make things that they can sell and generate some income. The idea was just to allow other people to use innovation in 3D printing to solve local problems.”

Keogh’s love of making and fixing began as a child in Bray, Co. Wicklow, where he would help his mechanic father in the garage.

Now he is calling for others to join the team doing its best to meet the unprecedented challenge of the Covid-19 pandemic.