"Ask me anything about AI!" - Q&A session with Google AI lead Laurence Moroney at UCD Festival 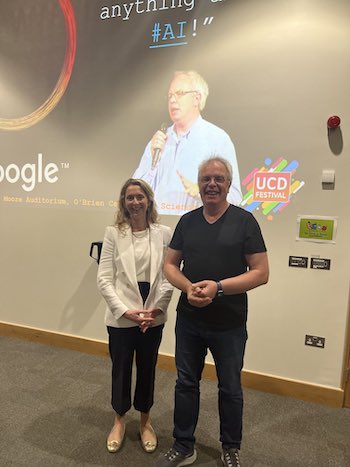 At the UCD Festival on June 11th, 2022, Prof Patricia Maguire, director of UCD Institute for Discovery, led a lively Q&A session with Laurence Moroney, Artificial Intelligence Advocacy Lead at Google, entitled, “Ask me anything about AI!” Below are our key takeaways.

Laurence’s definition of artificial intelligence is “a discipline for programming computers that will make them react more like an intelligent being does”. Google’s mission is to empower the world through technology and Laurence is “fortunate enough to work in the area of it where the stuff that we give away is free and open source. Anybody can use it; any student, any hobbyist”.

Using Google’s free software and services, a group of high school students Laurence worked with in India addressed a local pollution problem. Their elderly grandparents were afraid to venture outside, unsure of air pollution levels on any given day.  While they could check the air quality index on the news, those sensors were close to the news station, far from where the students lived and “pollution like that is very localised”. Using AI principles, the students began taking photographs of the sky with their mobile phones, cross referenced the pictures with an air quality index meter and built an app that gives a “very accurate” air quality reading.

“Ten years ago you had to be the best scientist working for the best companies to be able to do that. But now a bunch of high school kids were able to do it. Unlocking possibilities like that makes me so passionate about what I do.”

For the past five years, Laurence has been focused on transforming how AI is taught.

“It used to be a very highly academic thing. You needed to do a lot of math and calculus, and you probably needed at least a Master's degree just to be able to get started. But most people don't have that. So we wanted to transform how we build frameworks to make them easy to use. Also transform how we teach it to make it easy to understand. Anybody can build on this stuff and hopefully get a future career in it.”

The top skill he recommends is the programming language, Python.

“It is super easy to learn, completely free of charge, you can do it on just about any computer, even a cheap Chromebook. Type Google Colab in your browser. Colab gives you a full environment in which you can learn to code in Python.”

Google provides free tools “so that as people build AI systems, they don't unintentionally incur bias in those systems”. One of these is Know Your Data, which can check if your data contains bias before you use it to train AI models (machine learning algorithms that emulate logical decision-making based on available data). Laurence built a dataset to see if AI could tell the difference between a human and a horse, creating CGI images with “lots of different humans, different genders, different shapes, different sizes, different skin tones”. Despite carefully curating an inclusive and ethical dataset, when he passed his data through the Know Your Data tool, Laurence was taken aback.

“Even though I deliberately created a dataset with people with darker skin tones, it still failed to recognize them as people. So it is very easy for you to bring bias into your AI systems unintentionally. So what we wanted to do is come up with tools to prevent that type of bias.”

In 2015 Amazon discovered that its experimental AI hiring tool for filtering job applications was biased against female applicants.

“So if you ever build any models that could potentially propagate a negative bias towards somebody based on language, the idea is that that tool helps you spot that before you train the model.”

Google led a project using AI to detect diabetic retinopathy, a disease which can cause blindness. Using retinal scans labelled by doctors for level of disease, they built AI models “that were as accurate or even more accurate than ophthalmologists in being able to detect disease”.

AI does this by pattern matching, sifting through the scans quickly to differentiate the healthy retinas from the diseased ones.

“And a scientist said, ‘Well, I know the age of the person who owns this retina, or I know their birth-assigned gender, so can we train a computer to be able to predict from the retina what the person's gender is? And it actually got it right 97% of the time. So there was something that a computer could see in a retina that a human can't see in a retina that was able to determine the gender. And that opens up the whole area for new scientific possibilities and discoveries.”

“The thing about lettuce is that once you harvest it, it goes off very quickly. So the company built a little AI sensor on a drone that would fly over the lettuce fields and tell which ones to harvest now and bring to the supermarket and which ones could wait.”

Sometimes AI unintentionally solves environmental problems. Laurence helped to build an app with a university in Australia that allowed people to submit photographs of duck-billed platypuses in the wild.

“The pictures were geocoded, meaning you knew exactly where they were taken. Duck-billed platypuses will only live in fresh, clean water. And by looking at the pins on the map where duckbill platypuses were not - but where fresh, clean water was supposed to be - the Australian government actually found illegal polluters.”