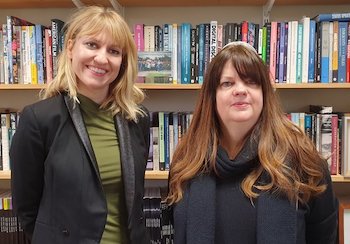 Millions of us do it (not everyone will admit it). Who doesn’t need a respite from our relentless, always-on work culture, where boundaries between office and home life are blurred with pinging notifications on our addictive phones? So for a surefire stress-buster you pull up YouTube and type: “Cute animal videos”. Seconds later - as the Panda sneezes, the kitten smiles or the bird headbangs to Elvis - all is well in the world.

It was Dr Allison Page’s research into this YouTube phenomenon that caught the attention of Diane Negra, UCD professor of Film Studies and Screen Culture.

Both women were panellists at the 2014 Society for Cinema and Media Studies conference in Seattle, USA, when their paths crossed.

“I was presenting this side project I was working on about cute animal videos and capitalism - and Diane was really excited about it,” says Dr Page, assistant professor of Communication and Theatre in Old Dominion University, Virginia, USA.

“I was so excited to meet her because I had read her work. Diane is so humble but she is such a known person in our field and such a star. From there we stayed in touch and she is a wonderful mentor to junior faculty, particularly women. I ended up writing this piece for Diane’s book that she edited called The Aesthetics and Affects of Cuteness.”

Dr Page admits to watching “a ton” of cute animal videos herself and says studies have shown they make workers more productive. She is “very critical” of the notion that “these videos should be used to soften capitalism and make people work more” - but she dabbles a little herself.

“My favourite is otters holding hands,” she laughs. “I went to the Natural History Museum yesterday and saw Irish otters!”

Thanks to her cute collaboration with Prof Negra, Dr Page is now on her first ever visit to Ireland under the UCD Discovery Visiting Fellowship Programme, which supports both established and early stage interdisciplinary researchers.

On Thursday she will give a public lecture on another new and fascinating phenomenon, the Prison-Televisual Complex. This looks at the sudden popularity of reality TV shows set in US prisons, such as the franchise 60 Days In, analysing how and why we have come to have two such unlikely bedfellows - the prison system and the television industry - and what it means for society.

In her spare time Dr Page has been reassessing her preconceived ideas about Dublin.

“I wasn’t expecting so much homelessness. I had a completely storybook vision of Ireland,” she admits, when we meet on campus.

“Dublin reminds me so much of San Francisco, specifically the gentrification of the city after the tech companies really got into the landscape in the way that they are now. There’s so much concern about gentrification and, of course, homelessness and people who are displaced. In San Francisco that plays out along racial and class lines.”

She believes that homelessness in Dublin “has been intensified by the exact same thing; the big tech companies coming in, the jacking up of rent - and how can people afford to live?”

Dr Page grew up in Iowa and went to university in Minnesota. Originally a major in piano performance, her campus activism against the Iraq war, racism and gender inequality set her on another path entirely.

“I needed more of an intellectual framework for these kinds of conversations. I started devouring critical race theory and I was really fortunate to have faculty members who were really supportive of interdisciplinary scholarship both at graduate and undergraduate level.”

UCD Discovery is delighted to provide another platform for Dr Page’s interdisciplinary research.

“My PhD is in Media Studies and I minored in American Studies and both are such interdisciplinary fields,” she explains. “I think we have to look outside of the confines of whatever discipline - you know, these sort of traditional understandings of disciplinary structure - to answer these really complex questions, or to even ask these questions a lot of the time.”

In her case, questions are around race, gender, algorithmic governance, culture and the media.

Dr Page has recently signed a contract with University of Minnesota Press for her book The Affective Life of Slavery: Race, Media and Governance. She is also working on a chapter for Prof Negra’s co-edited volume, Feminazis, Social Justice Warriors and White Feminists: Representing Feminists and Feminism as “Other” (currently under review at Duke University Press). So she is understandably horrified that the day before our chat President Trump presented American shock jock Rush Limbaugh with the Presidential Medal of Freedom.

“Either he popularised the word feminazis or he coined it. I woke up this morning thinking, “This is the world we’re living in right now. Where this awful, vile, vulgar person who hates women was given the same award that Rosa Parks got!”’

But Dr Page describes herself as “an optimist by nature” and this informs her teaching.

“I worry so much about students becoming demoralised or thinking, “What is the point?” I try to teach about social justice issues through the lens of people who are challenging them through activism.”

And if that fails to brighten the mood - check out the hand-holding otters on YouTube.