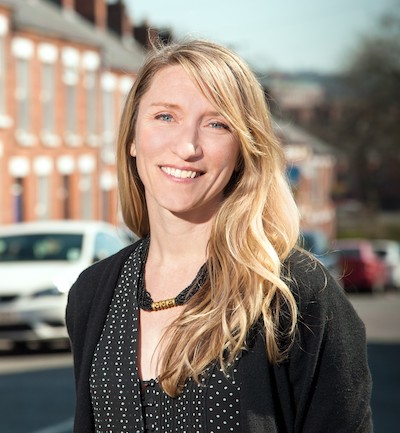 Dr Laura K. Taylor, pictured, is a lecturer in the School of Psychology at University College Dublin and Queen’s University Belfast. She recently received a New Foundations Award from the Irish Research Council for her project titled, Helping Kids! Promoting Children’s Inclusive Peacebuilding in Northern Ireland and the Republic of Ireland (Helping Kids!).

One of the key lessons her background in peace studies has taught Dr Taylor is “conflicts that have evolved over generations need generations to heal”.

This is why, almost a quarter century after the 1998 Good Friday Agreement, peace is still a work in progress in Northern Ireland.

Traditionally reconciliation has also concentrated on communities directly engaged in the conflict.

“But, second, we think the peace dividend should extend to all members of society, not just the historic rivals. For example to ethnic minorities, refugees, newcomers and other marginalised groups here in Irish society. Inclusive peacebuilding means we need to look forward, and we need to make sure that more voices are heard.”

Dr Taylor, herself, is a newcomer. Her American husband is now an Irish citizen and their four-year-old son was born here.

“Two out of three of us are Irish,” she quips.

The Helping Kids! project has so far worked with over 150 children aged 7 to 11 in the Republic, to ascertain their attitudes towards children from other communities via “fun online games”.

Trained researchers show children, for example, pictures of kids from various ethnic backgrounds - white Irish, black Irish, Traveller, asylum seeker, Catholic, Protestant - and ask questions like how they might help if this child cut their knee?

“The idea here is that we can see how different children respond or help based on what we call the ‘target or recipient’, the person who is in need of help. And we can compare those across the different targets. If we understand why children help and who they help, we can then improve future interventions, working with existing structures, like schools or cross-community programmes.”

The Helping Kids! lab previously found that in Northern Ireland’s ‘interfaced areas’ - homogenous Catholic and Protestant neighbourhoods separated by a peace wall - children are less likely to share with an ‘out-group’ member.

“So if I were a young Catholic girl, I'd be less likely to share with Elizabeth than I would with Aoife.”

But in non-interfaced areas that also were socially or economically deprived, only those children who had a strong ‘in-group’ identity were as reluctant to share with someone from another group.

Living alongside a different community in interfaced areas “makes the saliency of one’s in-group so much higher”.

“They’re welcome to if they choose. We always remind the children there are no right or wrong answers,” says Laura. “They are more than welcome to not help. What’s  interesting could be their justifications for why they wouldn’t help. They might say, ‘They don’t need my help’, or maybe ‘They wouldn’t want it’. When they are justifying it, we know where to target in interventions.”

While it is “okay to prefer your own group”, the message is to “not discriminate against the other group”. The 7 to 11 age group “is where we can see that shift between in-group preference and out-group derogation or harm - and that's why we're studying this age”.

Is there anything that all of the children in the study have in common?

“Kids will be honest,” laughs Laura. “They're quite open with how they think and feel.”

They also have a strong sense of equality and fairness.

The Helping Kids! lab filters its findings back to policymakers.

“Some of that earlier research was shared through the Knowledge Exchange Seminar Series in Stormont. We are interested in working with some of our local advisory council members around educational reform and supporting the Shared Island Initiative. We take our research both to the practitioners - school teachers and community organisations that are working with children -  and to the policymakers who support them.”

Even in post-accord times, “quality peace” cannot be taken for granted.

“It’s a lived-in, practised peace. It's not just the absence of conflict. It’s that each day individuals are able to realise their full human dignity. And that takes work.”

If you are a parent interested in signing up your child to the Helping Kids! lab, visit tinyurl.com/HelpingKids2022 or contact laura.taylor@ucd.ie.