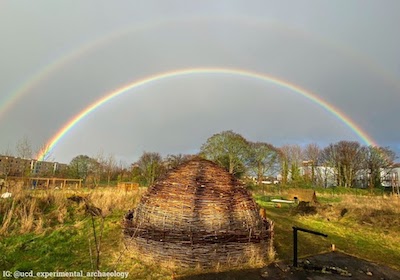 Prof Aidan O’Sullivan and Dr Brendan O’Neill are co-directors of the UCD Centre for Experimental Archaeology and Material Culture. They gave us a tour of their outdoor site, featuring students smelting bronze as part of their Making the Past module and an early mediaeval round house under reconstruction after an arson attack.

On a sunny March morning in a field on the southernmost end of UCD campus, a clutch of students gathers around a handbuilt clay furnace to recreate how metal tools were made in the Bronze Age.

Under the close supervision of Brendan O’Neill, they each have a role: some take turns sitting on a chair for the laborious task of working the bellows, pumping air into the furnace to keep the charcoal lit. Others keep that charcoal topped up around the crucible; a vessel inside which the copper is smelting in the heat. Finally, one student uses a tongs to take the crucible of liquid metal out of the furnace, bring it to the casting pit and pour it into a clay mould. A spontaneous round of applause erupts.

“These are first year archaeology students participating in a module called Making the Past, which is largely delivered over a one week workshop,” explains Brendan.

At the start of the week the students make the clay crucibles, furnaces and moulds of knives, pendants and axe heads. They then have to make copper from stone through the process of smelting.

“We're using things like problem-based learning, peer learning. I've taught a few of the students here and now they are teaching their colleagues what to do. There is an element of wanting to impress each other so it is very effective. Towards the end of the week their engagement level picks up hugely.”

Elsewhere on the large greenfield site, students of the MSc in Experimental Archaeology and Material Culture are bent with trowels, supervised by professional archaeologist Cathy Moore. They are excavating the site of a reconstructed mediaeval round house, which was burnt down in an arson attack in May 2019.

“We were disappointed,” says Aidan O’Sullivan, with some understatement, of the vandalism. “But we knew straight away that we could take it as an opportunity.” He concedes that he and Brendan are “very positive about these things”.

So they have called in Cathy to help show the students how to excavate the charred remains of the round house, interrogate the evidence and compile a fascinating dataset.

“They’re doing exactly what they would do on a site, trowelling the surface and identifying features like post holes, the fireplace, the broken tools, the exploded pottery, the things that were destroyed during the fire,” says Aidan. “What we now have here is an analogy - and that's essentially what experimental archaeology is. We make analogies. We build a house that is analogous to what would have once existed. The students are demonstrating how we can use experimental archaeology to understand the archaeological evidence much, much better.”

They have learned, for example, that despite the heat of the fire, the floor was not baked.

“That would be tricky to spot on an excavation,” explains Aidan, but there are other clues that indicate a fire event.

“Pottery exploded into fragments and flew across the floor. That means that when we look at the distribution of objects within a site, we have to be careful how we interpret them.”

A shale axe they had hidden in the thatch - in a nod to mediaeval superstition - had also exploded.

“We went back to the archaeological literature and found examples of fragmented axes from excavations, which must have been from fire events like these. So you're always using the present evidence to understand the past.”

The Centre is now reconstructing a second mediaeval round house, adjacent to the remains of the first.

“Why not rebuild?” asks Brendan. “We’re rebuilding it slightly larger and asking slightly different questions of the architecture of the house as well.”

Brendan had already felt the value of teaching students on-site in the first iteration.

“I used to teach about round houses inside a round house. I used to tell people about the settlements, the types of people that were there and the types of activities they would do around the house. It was a lovely focal point for me to frame the lecture around, as opposed to being in a classroom with pictures of round houses or even the archaeological remains which are not very much.”

Aidan describes this type of learning as “transformative”.

“You can show a photograph of an early mediaeval house to students, and a certain amount will go in. Or you can actually have them standing in a reconstructed early mediaeval house, where they can see the fire, smell the smoke, feel the darkness, sense the draughts through the wall.”

Everyone on the site - from the first years at the casting pit to the Masters students excavating - is engrossed in their task. Aidan and Brendan are advocates of immersive learning.

“It's the old adage that If you can learn from all your senses, then you've got a much deeper understanding,” says Aidan. “When we get them to make pottery they'll dig up the clay, make the temper, shape the pots, wait for them to dry, and then we'll fire them in a kiln.”

He and Brendan observe that afterwards students are less inclined to walk past museum displays of rudimentary tools, like a clay pot.