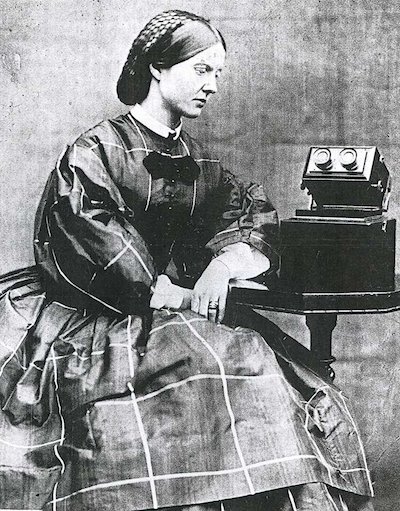 Given the shocking circumstances it is no surprise that most accounts of Mary Ward’s life begin with her dramatic death. Not here. You will have to read to the very end of this page to find out what happened on that quiet Offaly road on August 31st, 1869. Because for once we don’t want this trailblazing woman’s equally extraordinary achievements in life to be overshadowed by her grim obituary.

Mary Ward (nee King) deserves to be remembered more for her work as a naturalist, entomologist, microscopist, astronomer, illustrator, author and entrepreneur.

Born into privilege in Ballyfin, Co. Offaly, on April 27th 1827, Mary’s childhood was idyllic, with acres of gardens to explore and parents who encouraged her enquiring mind.

Her brother was sent to school to study mathematics, physics and chemistry to secure his path to third level education, but universities were closed to women. Mary and her sisters were kept home and taught to read and write by a governess.

Enchanted by the natural world around her, Mary aged three, began collecting butterflies and was soon was using her father’s magnifying glass to draw them, and other insects, with skilful precision.

A visiting scientist was so impressed he insisted her father buy the then 18-year-old the finest microscope available. Rarely was a gift so apposite.

Glass was difficult to source but Mary found a workaround, making her own slides for her specimens from slivers of ivory. Preparing specimens was a skill in itself because British scientist David Brewster - the Brewster angle is named for him - asked Mary to make his microscope specimens. He also used her drawings in many of his books and articles.

Precious few women authored books in Victorian times so it is testament to her talents that Ward had three books published. She was reprinted at least eight times between 1858 and 1880.

Her most famous book, Sketches with the Microscope in a Letter to a Friend was published in Birr in 1857 and reprinted in 2019 to coincide with the  150th anniversary of her death.

The enthusiasm in her writing is infectious, her simple descriptions making the natural world at once accessible and magical. Through a microscope the skin of an eel looks “not unlike the spotted coat of a leopard”. A magnified dragonfly’s eye is made up of “beautiful hexagons” and calls to mind “the wire netting that is often put around garden plots to keep out rabbits”. Up close the minute centre of the scarlet verbena flower is like “a tiara of pearls”. Her accompanying illustrations are sublime.

The energetic detail in this book is all the more remarkable given her personal circumstances. In 1854 Mary married Captain Henry Ward of Castle Ward, Co. Down. They had eight children but domestic duties were considered by her husband to be entirely Mary’s domain. Captain Ward had resigned his army commission and had no regular income. The family was forced to move house many times and Mary wrote and illustrated science books to supplement her meagre dowry.

She confessed that Sketches with Microscope was not written in the “delightful employment of abundant leisure, but, on the contrary, as a serious occupation, one amidst interruptions and under pressure of numerous home duties”.

Despite these constraints on her time, Mary was described as “a hands-on mother” by her descendant Lady Rosse of Birr Castle.

Mary was also a keen amateur astronomer like her first cousin William Parsons, the 3rd Earl of Rosse. He built the Leviathan of Parsonstown, a six-foot telescope that was the largest in the world from 1845 to 1917. Ward visited Birr Castle to sketch every stage of the build. These sketches were used to inform the restoration of the telescope in 1996, as were the photographs made by Parson’s wife Mary Rosse.

William and Mary Parson’s teenage sons Richard and Charles built a steam-powered car that could travel at four miles per hour. Mary Ward’s natural curiosity could not have resisted taking a spin on it to Birr with her husband, the boys and their tutor. As they rounded the bend at St Brendan’s Church, Mary was thrown from the car and fell under its wheel. She died almost instantly of a broken neck, becoming the first car accident fatality in the world. This sad motoring history fact has pulled focus from her contributions to a kaleidoscopic spectrum of disciplines in her short, hardworking lifetime.