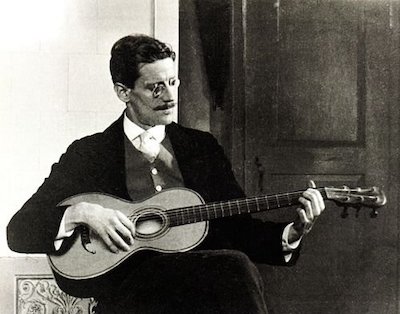 Ahead of Bloomsday on June 16th, this Discovery podcast looks at how Joyce can still be found in everything from theatre, jazz and poetry to eye-tracking technology and rap.

This year marks the centenary of James Joyce’s literary masterpiece Ulysses. One hundred years have passed but this controversial Dubliner’s influence is undimmed.

“A huge number of visual artists and musicians have been influenced by Joyce from Joyce's own era onwards,” says University College Dublin Joyce scholar Professor Anne Fogarty, who puts this down to the “dynamic aspects” of his work.

Aside from books such as Finnegans Wake and Dubliners, Joyce also wrote plays, journalism, poetry -  and even composed a song.

What made him such a creative polymath? In what ways does he continue to inspire artists today? And why do he and his work remain so timeless?

Joyce studied Arts in UCD from 1898 to 1902, but “the curriculum was a bit broader in his day than it is now. And so if you read about his time in UCD in A Portrait of the Artist as a Young Man you notice that the students are attending classes in logic, which is quite mathematical, and physics as well,” says Fogarty. “So that split between the arts and sciences that we're well familiar with had already begun in Joyce's day but I don't think it was as absolute as it is now.”

With Ulysses he intended to “explode the form of the novel” and it showcases his multitude of interests.

“Absolutely everything is there: astronomy, mathematics, logic and philosophy. You would think one human being can’t master this much…  We are still learning to catch up on the interdisciplinarity of Joyce.”

He was “not a model student” but his lecturers were “quite tolerant of him”, recognising him “as an artist in the making”. Back then he attended his lectures in Newman House on St Stephen’s Green, now home to the Museum of Literature Ireland (MoLI).

“Joyce is at the heart of everything we do,” says its director Simon O’Connor. It is “really quite easy” having perhaps the most experimental writer of the 20th century as a “springboard” for their artistic direction.

“Joyce is a great enabler. He’s such a broad, intelligent, iconoclastic, mischievous, good humoured and experimental character that we were saying, ‘Well, that's what we need to be as an organisation.’ Every company will at some point sit down and work on its vision, its mission, its values. We sat down and said, ‘What would Joyce probably be writing if he had to set up corporate values for an organisation?’”

There is “something fundamentally democratic at work” in Joyce’s writing, particularly Ulysses, that MoLI mirrors.

“We need to make sure that this museum isn't just a pantheon to a handful of writers. In a way, it can also act as an anti-pantheon and bring people in that maybe wouldn't even be within the welcoming embrace of the artistic community.”

There were no borders to Joyce’s curiosity, perfectly reflected in MoLI’s Ulysses 2.2 project, an ambitious series of eighteen artistic commissions, one for each episode of the novel.

“We started with Anne Enright who created this amazing eye tracking installation in the museum to tell people how they read Ulysses as opposed to what was on the page. It was a really fascinating project.”

Enright’s idea was inspired by Ulysses being a book that “tries to confound the way we read - more than any other”.

Rapper God Knows used Joyce’s Nausicaa episode of Ulysses as a jumping off point for a live gig exploring sexual identity, sexual taboo and voyeurism. After his performance he spoke to O’Connor about how he writes a song, sometimes taking years to perfect a line.

“I said, ‘Well, that's really familiar. That's exactly the way Joyce worked. If you look at Finnegans Wake, for example, that's what was going on there. You're part of that lineage.’”

Joyce was an accomplished tenor and music resonates in his writing. His work has moved musicians from avant-garde classical composers like John Cage to pop stars like Kate Bush, whose song The Sensual World uses Molly Bloom’s famous monologue.

“If I can write to something really quickly I know that there's music in the language. I found the song Goldenhair and I wrote it in one sitting. I sat down to write it as a classical piece and it came out as a jazz piece. I kept hearing Kurt Elling, the Grammy Award winning jazz singer in my head. I had never worked with him before.”

“It’s one of my favourites because it's like he wrote a blues song. It’s James Joyce, this legend that we all know and revere and he wrote what I think is an amazing blues song.”