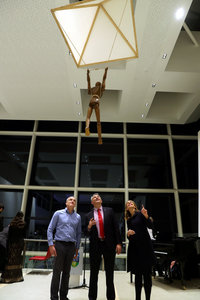 Among the artefacts in our recent Machines of Da Vinci exhibition in the O’Brien Centre for Science was The Vertical Ornithopter or Flying Machine.

Composed of two pairs of wings that perform a criss-cross movement, it was meant to be set in motion by an upright man using his hands, feet and head to move the wings and generate the requisite momentum for take off.

The story of how Leonardo came to UCD also begins with a bold vision that grew wings and took flight thanks to the passion and persistence of Dr Antonio Benedetto, UCD School of Physics.

“One weekend I was walking in the city centre of Rome and just by chance I saw there was an exhibition of the Machines of Leonardo at the Mostra di Leonardo gallery. I went along and the owner was there,” says Dr Benedetto, who had already planned to host a “small workshop” at UCD marking 500 years since Da Vinci’s death.

“I saw the machines, they were nice, and I asked if it was possible to have some of those machines shipped to Dublin for our event? They said, “Yes, we may arrange something”. My idea was to have machines covering different aspects of Leonardo’s work. For example, the war machine was very important in the story of Leonardo. The bicycle I chose because it seems everyone has a bicycle in Ireland! Other exhibits - like the parachute and the wings - were chosen because of their contribution to modern inventions. Little by little our event grew.”

Dr Benedetto emphasises that many others helped to make his vision a reality, chief among them his School of Physics colleague Prof Padraig Dunne. The Italian Embassy in Dublin and the Italian Institute of Culture in Dublin supported the event and provided the exhibit’s fourteen information panels which gave a captivating overview of Leonardo’s life and work.

The O’Brien Centre’s light-infused, multi-storey atrium provided the perfect backdrop for showcasing Da Vinci’s precocious genius. Dotted around the fourth floor - or suspended from the ceiling - were ten marvellous machines. Full scale and in wood, they were made by an Italian artigiano based on drawings in Leonardo’s Atlantic Codex, a twelve-volume bound set of drawings and writings.

“I was fascinated by his incredible design for a parachute. This was in the 15th century - his ideas were way ahead of his time. I loved that the most,” enthused Prof Patricia Maguire, Director of UCD Institute for Discovery, which facilitated the installation.

The world’s first parachute - a sealed linen cloth held open by a pyramid of seven, metre-long wooden poles - hung dramatically from a beam above the grand piano.

“UCD Discovery was greatly honoured to be part of the team to bring Leonardo Da Vinci to UCD,” added Prof Maguire (pictured above with Prof Brendan Murphy, Head of School Maths & Statistics and Mr Bernard Capraro, Intel Research and Development Ireland Ltd). “It was such a wonderful tribute to a truly interdisciplinary scientist celebrating his scientific, engineering, artistic and culinary genius in the company of his excellency Ambassador Mr Paolo Serpi.”

Mr Serpi was one of over a hundred guests who attended the grand finale of the week-long event - a gala dinner prepared by Michelin-starred chef Eugenio Boer.

Mr Boer’s mouth-watering four-course meal was inspired by the old recipes of Da Vinci, who was also a keen cook and kitchen gadgets inventor.

Each course was introduced by the chef himself along with a “scientific commentary” by our colleague Fabio Bruni, Full Professor of Biophysics at the University of Roma Tre. Exquisite Tuscan wines, in honour of the region where Leonardo was born, matched each course.

Continuing with this feast for the senses, guests were entertained with an Italian opera performance.

Attendees praised the “theatricality” of the evening, which rounded off a day of talks “inspired” by Leonardo’s work - encompassing everything from Renaissance Italy and quantum computing to crystals and symmetry in nature, chemical-physics in art conservation and innovation in education.

Prof Dolores O’Riordan, Vice President for Global Engagement at UCD, praised the partnerships between UCD and Roma Tre University, which include joint PhD agreements in Science and Law.

“These developments from both institutions to our partnership shows the value of our existing relationship and the opportunities we see to expand in the future.”

Her speech also mentioned the “deep relationship” between Ireland and Italy.

“Throughout history Irish people have chosen for various reasons to call Italy their home. Last century one of Ireland’s most celebrated authors James Joyce who is one of UCD’s most notable alumnus made Trieste, on the Adriatic coast, his home for over 16 years between 1904 and 1920.”

The Machines of Leonardo exhibition ran for a week (Mon 18th - Fri 22nd Nov) and drew a steady stream of visitors, who scanned the room in wonderment before taking a closer look at each remarkable item.

Such was the stunning success of this flagship event that UCD Physics and UCD Discovery have already had requests to repeat it next year - and “complaints” that the exhibition left far too soon!