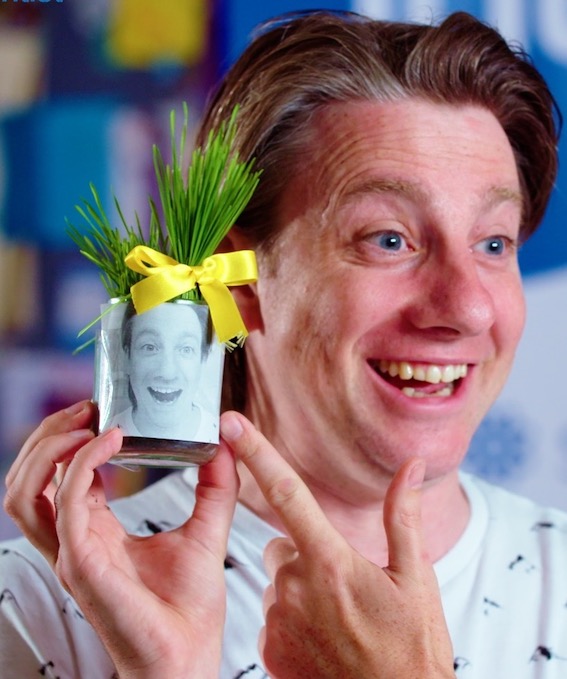 Why do spiders have eight legs - and not six or ten? What would happen if you landed a spaceship on Jupiter? What would it sound like if you chopped off the top of your head?

Truly, children ask the most challenging questions. But it’s all in a day’s work for UCD Discovery’s Outreach and Impact Scientist Phil Smyth, a presenter on RTE shows Home School Hub and After School Hub.

Science Week is the perfect launchpad for his new vehicle, Let’s Dive In!, a brand new RTEJr podcast for kids that “answers all the little, big questions”.  Sponsored by Science Foundation Ireland and co-presented by Phil and British science journalist Julie Gould, kids pose the questions and experts are called in to answer them.

“We spoke to a researcher in University College London about what it would sound like if you chop off the top of your head,” says Phil. “We talked to UCD physicist Tom McCormack about walking on Jupiter. The experts really enjoy answering questions they aren’t normally asked and the kids are delighted to find out those answers. So it works really well on both sides.”

Children’s natural curiosity, coupled with their lack of inhibitions around social conventions and taboos make for some fascinating enquiries.

“Kids have wondrous questions that really make you go, ‘I never even thought of that!’” says Phil. “Like, why DOES a spider have eight legs and not six or ten? I’ve actually just accepted eight legs as fact and never even thought about it. Another question we had is why do some people have skin that is a different colour? We talk about melanin in the skin and why historically and through evolution it can be different.”

He recommends that parents download the podcast and listen with their kids, perhaps in the car.

“And hopefully as you shift from second to third gear you’ll be thinking, ‘I didn’t know that!’”

The podcast is not the only thing keeping Phil busy during Science Week. Starting this evening he will perform “bigger experiments” live on RTE family show Future Island live over three nights from 7pm-8pm, alongside presenter Liz Bonnin and Professor Luke O’Neill.

“One of these experiments involves the creation of clothes that you'll never have to wash. The trouble with that though is you have to then test that it works - so we've gotten two "volunteers" to go through an experimental process to see if it all works. You'll just have to tune in to see how we "test" them!” he laughs.

As if that is not enough excitement, on Friday evening from 8pm-9pm Phil hosts the SFI Pick Your Brain live quiz for adults with spot prizes galore. He is also involved in the Intel Mini Scientist exhibition, a programme which allows primary school students to develop science projects.

Meanwhile, the RTE After School Hub is ongoing until Christmas, for an hour every weekday from 3.20pm. Last week saw Phil swinging buckets of water over his head and experimenting with blackened slime.

“After School Hub is a little bit lighter than Home School Hub - it's not meant to replace school anymore. It's education with a small E. It is edutainment.”

Phil is pleased that a silver lining in the dark cloud of the coronavirus pandemic has been an increased interest in science among the general public.

This story was brought to you by UCD Discovery - fuelling interdisciplinary collaborations.