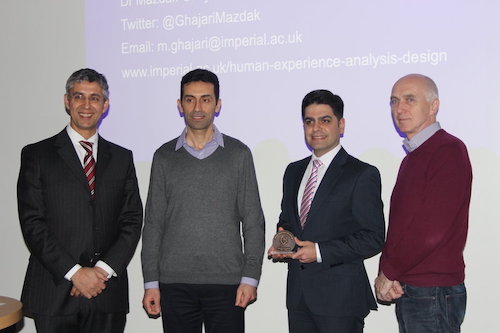 You could hear the collective intake of breath from the audience in the Moore auditorium in UCD’s O’Brien Centre for Science.

As part of his presentation on predicting and preventing TBI, Dr Mazdak Ghajari showed the video of world #1 professional bike rider Nicholi Rogatkin’s 30ft fall in the 2015 Red Bull Rampage race in Utah.

The 20-year-old American daredevil had a go-pro camera on his helmet which captured his terrifying tumble down the side of a sheer, vertiginous embankment.

Getting shakily to his feet afterwards, his helmet buckled and with blood coursing down his face, Rogatkin shooed away medics, got back on his bike - and finished the race.

“He fell down but he didn’t go unconscious. Should he be allowed to continue or not? That is a very difficult decision for the medics,” said Dr Ghajari, senior lecturer at the Dyson School of Design Engineering and founder of the HEAD Lab at Imperial College London. “People are becoming more and more concerned with brain injury in sport - from tackles in American football and rugby to heading in soccer.”

But before his engaging talk - which also featured supercomputer simulations of brain injury following sports and traffic impacts - Dr Ghajari was introduced by Prof Michael Gilchrist of UCD School for Mechanical and Materials Engineering.

“Mazdak and I got to know each other quite some years ago through our common interest in head impact biomechanics and the use of computational simulation techniques to model those impacts,” said Prof Gilchrist. “I’m very impressed with the work he has managed to do since then in this field. The interdisciplinary research involved makes it an appropriate topic for this UCD Discovery series.”

After introducing Dr Ghajari, Prof Gilchrist announced two winners of the distinguished Broberg medals, established in UCD in 2010 in memory of eminent Swedish scientist Prof Knut Bertram Broberg by his late wife Anne Buttimer, who was herself a UCD professor of geography. Up until his death in 2005, Prof Broberg was passionate about encouraging young researchers in his own areas of interest - fracture mechanics, biomechanics and mathematics.

“Michael’s first 3D model of TBI has been cited quite a lot and he continues to produce very important work. I hope we can collaborate and meet each other more.”

The importance of both men’s research is underscored by the fact that TBI is the leading cause of death and disability in young adults.

“Working in silos is not how we tackle big challenges like this nowadays - it requires interdisciplinary research across medicine and engineering,” said Dr Ghajari, who collaborates now with neurologists and neurosurgeons at Imperial Neurotrauma Centre using the latest cutting edge technology to explore the parameters of TBI.

“Diffusion MRI detects changes and abnormalities in the brain we could not detect with standard MRI or CT scans. That in itself is very exciting,” he enthused. “We need to see and understand what has happened to the brain within milliseconds of sporting collisions, assaults, military contacts and car traffic accidents. Computational modeling using supercomputers can help us to predict distribution of forces at the moment of injury and in future they may help us in predicting patient outcomes.”

For instance, the Red Bull medical team could perhaps not have predicted that pro biker Rogatkin would be resilient enough to insist on finishing the race after his shocking fall. They stood aside and let him continue.

“What is the basis of those medical decisions? Are decisions based just on symptoms of concussion? Because this guy didn’t show any symptoms. Or should it be based on more objective measures?” asked Dr Ghajari. “That would mean understanding the link between mechanical forces and what they do to the brain.”

Questions like this are urgent because TBI is “a silent epidemic”, with many patients not showing any obvious signs of brain damage.

In the lab, Dr Ghajari and his team use live rodents to further their research. He showed computer images of a rat brain following TBI “which allows us to more accurately link mechanical forces with brain tissue damage seen in MRI and post-mortem analysis”.

He also presented his recent work developing more protective helmets for cyclists, motorcyclists and for use in sports, complaining that current models are insufficient.

“Helmets are not fit for purpose, in short. We don’t see as many skull fractures now because of them, which is good. But they need to be much more sophisticated to protect an organ critical to life and personality.”

As an experiment, he and his team retrofitted an existing helmet with a new add-on liner made of viscoelastic, a material that exhibits both elastic and viscous behaviour under pressure. During crash simulation, this added material had a “significant” protecting effect for frontal impacts at low impact speeds and a “marginal” effect for side and rear impacts.

He concluded: “This work shows the potential of the viscoelastic add-on components as lightweight and cost-effective solutions for enhancing helmet protection and decreasing strain and strain-rate across the brain during head impacts.”

Dr Ghajari’s fascinating talk was attended by students and faculty from across campus and included Prof Patricia Maguire, Director of UCD Institute for Discovery and Prof Adrian Ottweill of the School of Mathematics and Statistics.