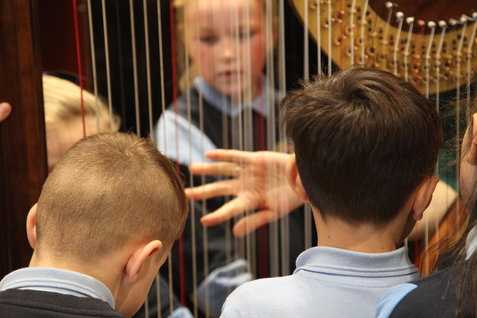 Dr Shane Bergin is a physicist and an assistant professor in science education at UCD's School of Education. His interest in informal learning inspired Quavers to Quadratics, a programme fusing science and music for primary school children, delivered in partnership with the National Concert Hall and Trinity College Dublin. Now in its eighth year, it is supported by Science Foundation Ireland’s Discover Funding Programme.

How does a drum make noise? Why do musical instruments made from different materials sound different? Can you see sound? The Quavers to Quadratics team uses simple questions like these to get children thinking about music and science in tandem.

“We don't have a music section and a science section; instead we have created a curriculum that blends them at every level. It means children are playing with ideas common to science and music,” explains Shane, who cofounded Quavers to Quadratics in 2014 with National Concert Hall Head of Education Nigel Flegg and Dr Marita Kerin, who directs the Bachelor of Music Education at Trinity College Dublin.

“The children involved are typically in third, fourth and fifth class in school, and it's all play-based.”

The Quavers to Quadratics programme is led by undergraduate students from science and music who work closely with the participating children’s teachers. “We use an approach called co-teaching, so the teacher is involved all the way through”. A day-long workshop in the National Concert Hall - where the children get to play with various musical instruments and create their own with recyclable materials and imagination - is bookended by two visits to their classrooms by the undergraduate student leaders.

Quavers to Quadratics works to all of physicist Shane’s strengths: a love of playing music and a belief in interdisciplinary teaching, learning and play.

“From our research on Quavers to Quadratics, we found that undergraduates who have interests in both science and music found, as I did myself, that there was this pressure to pick one in school. A narrowing happens as we progress through education; it’s this idea of having to focus deeper and deeper on one discipline. And that runs out of road. Because if you're stuck doing the one thing the whole time it can become very monotonous.”

“Quavers to Quadratics was developed to “push against that, and do it in a playful way”. Shane advocates for a “move away from the idea that science is just seen as a discrete part of the school curriculum, and similar for music, and that there are certain sorts of people who are good at one or the other, and rarely good at both”.

He argues that real-world problems do not fall into discrete categories - and that neither do we.

“I found from my experience in university that interesting things happen on the edges of disciplines. So if you're a mathematician and you're interested in dance, you could imagine a huge amount of playful overlap there. And that's a space where you can express yourself, be different and be creative.”

He adds: “The Institute for Discovery is an exception to this but universities tend to be quite disciplinary and protective of that. If you create a module it's, ‘Well, what code does it have? Does it have a Physics code, an Education code, a Music code?’ There will be a lot of College structure that goes around that. But it's in the in-between spaces that you can start to do creative things, and perhaps in time they can become more normalised into the formal structures when people start to see their real value.”

Along with introducing children to science through music, Quavers to Quadratic’s second goal is to provide a creative space for undergraduates.

“I feel education in our universities is far too structured – much more so than when I first went to college, some twenty years ago. Students are timetabled and modularised to within an inch of their lives, with assessments coming out of their ears. There isn't an awful lot of space for them to be creative in a way that isn't assessed, and I feel that's really important because they need space to try things without the fear of failure.”

Through Quavers to Quadratics they can “try on identities and make the project their own” - and Shane welcomes interested students to get in touch.

He mentions that popular educational framework Bloom’s Taxonomy has ‘create’ at the top of its pyramid.

“Being creative is the polar opposite of just memorisation and repetition of things as well,” he says, adding that the SFI Discover Funding Programme is “really special” for supporting creative, multidisciplinary programmes like Quavers to Quadratics.

Shane believes that Aistear, the early childhood curriculum framework from birth to the age of six years should be expanded for the older classes. This would allow children to “do science and play music in school as opposed to learning things off about those, and perhaps they can blur disciplines more as a result, like we do with Quavers to Quadratics”.

He quips that universities could benefit from a more Aistear approach to learning too.

“Why is it that the further in education we go, we have this idea that if it's fun you're not learning? I would say if you ask any researcher in their lab they would say when they are having fun doing their research they are at their best.”

This article was brought to you by UCD Discovery - fuelling interdisciplinary collaborations. If you are interested in getting involved with Quavers to Quadratics, contact shane.bergin@ucd.ie.