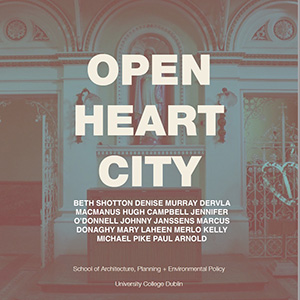 Professor Hugh Campbell, Head of Architecture in UCD School of Architecture, Planning and Environmental Policy, recently received a grant from the Irish Research Council for the project, ‘Documenting, managing and interpreting the material heritage of Ireland's Magdalene laundries’.

“This is what sparked my interest in this whole world,” confirms Prof Hugh Campbell. “Many people felt that this was an inappropriate and hasty act that would simply result in the entire disappearance of the building and all that had gone on there.”

Magdalene laundries were institutions usually run by Roman Catholic orders, which operated from the 18th to the late 20th centuries. An estimated 30,000 ‘fallen women’ were confined in these laundries, providing unpaid labour for what were essentially commercial enterprises. The site on Sean McDermott Street, in Dublin’s north inner city, was the last laundry in the State to close in 1996. Rather than being sold to that hotel chain for redevelopment, it has now become a focal point for potential reinvention.

“I was contacted about this by Katherine O'Donnell, Associate Professor of Philosophy in UCD who is very active with the Justice for Magdalenes group, along with human rights lawyer Maeve O' Rourke from NUIG. Katherine had contacted Grafton Architects about making a proposal for the site.”

Advised by the architects to explore the laundry’s history and potential in greater detail first, Hugh and Katherine co-founded the interdisciplinary Open Heart City Collective to liaise with “survivors, local groups and all kinds of stakeholders to start to build a future vision for it”.

Hugh set up a graduate design studio on-site in 2020.

“It was a teaching studio that involved students from UCD and Queens University carefully documenting, recording and surveying the existing laundry buildings. Some of the site was inaccessible but we accessed as much as we could.”

“It is subtle in the sense that at first glance it doesn't seem terrible. It is not in-your-face oppressive. There’s quite a nice church, a nice tiled floor, a nice staircase and so on. But then you realise that the women who lived there were doing laundry every day and they couldn’t leave.”

The students did detailed surveys and hand drawings of various architectural features, including the chapel floor tiles.

“They were conscious that part of what the women had to do was to scrub the tiles, and they were supposed to be reminded when they were kneeling on the tiles of a sense of gratitude for what they were being given.”

These drawings - along with other analysis and models - were exhibited on the site last September and evoked a “visceral response” from some visitors.

But the “main focus” of their work was to answer the broader question: How do we act in this place? It was agreed that the old laundry should become a “site of conscience”, housing an archive to reflect its social and cultural history.

But this is just a starting point. What ultimately happens to the site is “the big question” - and opinions vary, even among the survivors.

“Some want the site dynamited because of their horrible, traumatic memories. Others want it preserved. Others want it to become a living place and to put housing there so it is part of the community.”

Beyond the input of survivors, “you've got a lot of local groups, community groups and other kinds of stakeholders in the area. So the thing would be really to try to think about a design process that would include as many voices as possible”.

Hugh compares this type of bottom-up design process to a citizens’ assembly. Though it might sound counterintuitive, he believes it is important to take things slowly.

“Generally what tends to happen with these sites is either the wrong thing or nothing at all,” he explains.

The project’s technical challenges - like the upgrading and retrofitting required on a building dating back to 1821 - are less complex than the emotional considerations.

To help achieve restorative justice, the new design should acknowledge the suffering that once took place on the site, but not in a contrived way.

What Hugh wants to avoid is for visitors to feel that “they are now in the memorial bit so go and remember. And now come over here and have some coffee”. Instead it “might be more things overlaid with each other”.

He likes the idea of, for instance, “a community garden that is also a memorial” but concedes that “whatever you do will have its critics”.

Hugh is still optimistic that the site can be a success and provide a template for the hundreds of other problematic legacy buildings that dot the country, including former industrial schools, orphanages and mother and baby homes.

“There are lots of institutional buildings which are currently vacant and ripe for reinvention but fraught with difficult histories,” he says.  “What we're actually talking about is an approach to how you might go about intelligently and sensitively developing these kinds of places. Turn them into housing or community hubs or remote-working hubs. There's no shortage of them and there's no shortage of need.”

Listen to the Podcast