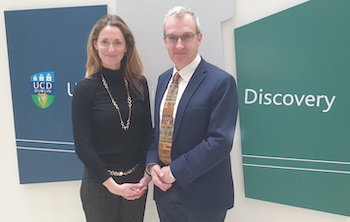 Pictured: Prof Patricia Maguire, Director, Institute for Discovery and Tom McLeish, Professor of Natural Philosophy in the Department of Physics, University of York.

Science is a dry and clinical enterprise, all about learning facts and applying methods, with zero room for imagination and creativity. “Creatives” belong in altogether different spheres of life, like the arts, and have no business donning lab coats.

These stereotypes are true, aren’t they?

Absolutely not argues theoretical physicist Prof Tom McLeish in his latest book The Poetry and Music of Science: Comparing Creativity in Science and Art.

On his return visit to UCD recently we caught up with the first Chair of Natural Philosophy at the University of York to discuss how creativity is, in fact, transdisciplinary, and as prevalent in the sciences as it is in poetry, music, novel-writing and art.

“This all started not only with my interdisciplinary interests but also because I quite regularly go to visit schools,” explains Prof McLeish, who was dismayed at how pupils repeatedly said they dropped science subjects for A Levels because they didn’t consider them to be creative enough.

“It’s awful. I’m thinking, ‘What have we done, through education or the media or whatever, to convince young people that sciences don’t belong in “the creative subjects”?' Because it’s impossible to do science without being creative.”

The difference between “great science and also-ran”, he says, is the quality of the ideas.

“Who’s got an idea about black holes? Who’s got an idea about how this virus works, or this protein? You can’t deduce that. Science is not deductive; it’s inductive. You’ve got to have ideas, imagine what nature might be like and then do experiments to check them. So that’s where the imagination comes in. It’s the first half of science!”

Yet people tend to think of science solely as what Prof McLeish calls “the downhill bit” - a “series of established facts to learn” or the idea of a formulaic “scientific method”.

“I mean, there isn’t really a scientific method. It’s only an over-neat way of talking about science if you’re not a scientist. I know that might sound a little bit outrageous and perhaps it is but it’s the truth nonetheless - there are all sorts of ways that scientists do research: we do what seems to work.”

He decided to write a book about where both scientific and artistic ideas come from, interviewing scientists, engineers and mathematicians, along with a comparison group of writers, composers, artists and poets; a cohort whose creativity is undisputed. All of his interviewees were asked the same questions: How do you start? Where did that first hazy idea come from? What about the twists and turns? The wrong avenues and eureka moments?

“And after a while I couldn’t tell the difference between the shapes of the science stories and the poets’ and artists’ stories. It was the same pattern over and over and over again of desire, a vague idea, a struggle, an attempt to focus then materialise it and trying two or four or ten or fifteen or thirty different things that didn’t work. Then experimentation - artists and writers do experiments all the time.”

He noticed, too, that people across all disciplines enjoyed “aha!” moments when they took a break from whatever conundrum had previously been preoccupying them.

When they allowed their conscious minds to drift away from the problem, a subconscious solution bubbled up.

“It’s when you’re switched off,” observes Prof McLeish. “You’re busy, busy, busy in your mind, then you switch off. It happens in these liminal moments, passing from one busy environment to another. You switch off and you can listen to that quiet little voice from your unconscious mind, “I’ve got an idea! I’d love to tell you about this idea! Can you listen to me?”’

But nowadays so many of us spend such in-between moments scrolling on our phones, perhaps leaving less quiet time for realisations to form.

“Boredom is really important,” he agrees. “Where there’s no continuous input. You put those phones away! You can’t teach how to be creative but there are life practices and work practices that will help you and me to be more creative. It’s about giving ourselves those neutral times.”

That scientists are aloof or detached in their approach to work is another stereotype that Prof McLeish is passionate about dispelling.

“In order to be creative in science, you cannot pretend that science is a purely cerebral, logical, emotionless process. It is absolutely not. And the cognitive and the affective and emotive are completely entwined in these stories.”

He is enthusiastic about recent collaborations between scientists and poets, stirring that emotional pot together.

“The best way is never a master-servant relationship. That never works. I mean, you’ll get something out of it but you’ll never cash out all the great potential unless you each put an equal effort into listening and learning from the other and acquiring some of the skills of the other. Like all interdisciplinarity, it has to be two-way.”