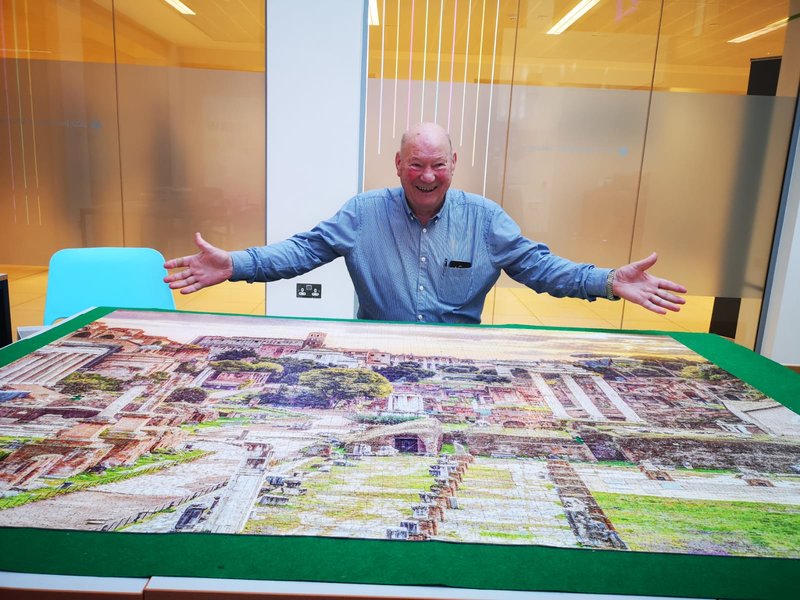 Covid-19 has moved our Intergenerational Jigsaw Club to WhatsApp and Twitter. Like a lot of people in Ireland these days we are WFH on our jigsaws! Our most loyal member Tom Moran, 83, took a break from his 1000-piece Penguin King and 1000-piece Picadilly Circus scene to tell us what being in the Jigsaw Club means to him. Tom joined in 2018 following the death of his beloved wife of almost 53 years, Ann. Here he explains how the camaraderie of the Jigsaw Club has helped to lift his spirits, introducing him to people of all ages, backgrounds and cultures. Tom [pictured]was also instrumental in completing our most challenging jigsaw to date: this 5,000-piece ancient city scene!

Couples often enjoy separate pursuits and Tom and Ann Moran were no different. While she was a dab hand at golf - the 4 handicap of her youth never straying beyond 18 in her Seventies - Tom liked to lose himself in jigsaw puzzles.

Their three children raised, Tom and Ann were also “good people to go out and do things together” - socialising through Ann’s golf club in Delgany, Wicklow and meeting up with friends.

“Ann was never sick in her life until she got over 75,” says Tom, 83, a retired chemist and businessman, originally from Mayo and now living in Dublin.

In 2012 Ann had a heart attack. Though she recovered, a hip replament operation the following year meant she became less mobile and more dependent on her husband.

“From an early stage I decided there was only one thing for it: I had to become her full-time carer. I said, ‘Okay, this is what you do now, Tom’. I did that for three-and-a-half years from 2014. Ann died on the 27th of September 2017 and on the 20th of October we would have been 53 years married.”

In the lonely months that followed, Tom immersed himself in his lifelong hobby of jigsaw-making. Though a welcome distraction from his grief, it was a solitary, silent pastime - too solitary and silent. An old friend was concerned.

“After Mass one day she picked up a newsletter about UCD Intergenerational Jigsaw Club. It was six or seven months after Ann died. As soon as she saw it she thought of me. She knew the advantages of having that camaraderie. She was my children’s school teacher many years ago and we remained friends. She was thinking of it being good for me to maybe make jigsaws with other people rather than making them on my own at home. I did three jigsaws after Ann died when I was here on my own in the house.”

Eight months after his beloved wife passed, Tom walked into UCD’s O’Brien Centre for Science for the first time.

“I was looking very lost and this lady said, ‘Are you looking for the Jigsaw Club?’ She brought me to the room and there were 15 or 16 people there. I joined up that day.”

Almost two years on Tom remains one of our regulars, coming to the Institute for Discovery every Friday from 2.30pm to 4.30pm to chat with friends old and new while completing puzzles together. These range from easy 200-piece jigsaws to the incredibly challenging 5,000-piece project the group recently finished together after several months. Tables are set up so people can work together and complimentary refreshments are provided.

“The girls are fantastic with the cup of tea and there’s always a biscuit with it. That’s very nice,” says Tom, praising Institute for Discovery Manager Tara Byrne and her UCD in the Community colleagues Holly Dignam and Teresa O’Leary, who facilitate the weekly gatherings.

“Everyone puts their drinks down on the table and keeps sipping and working on the jigsaws at the same time. That’s called dedication by the way!” laughs Tom.

As its name suggests, the Intergenerational Jigsaw Club welcomes people of all ages and backgrounds, from both on and off campus.

“There’s a good variety, from the retired people like me who don’t live too far away, to the students,” says Tom. “The foreign students are very interested. We have had some American students, Erasmus students. We had a very keen Spanish person and some Canadians. There’s a few people there now in the last six months and they’re very chatty and we have a great laugh. It’s very multicultural. One of the girls from Romania was looking for accommodation and we found a room in a house for her.”

Solving jigsaw puzzles exercises the left and right sides of the brain simultaneously, improving short-term memory and relieving stress by promoting mindfulness. As a bonus, Tom enjoys the lighthearted conversation that flows in the group.

“Nobody asks too much about you and there are no serious questions as to religion or anything like that. You talk jigsaws. The students would tell you about their courses, and you might ask the foreign students what universities they came from and what was life like there. But the main interest is talking about whatever jigsaw we are working on.”

Tom had a very successful career, including co-founding Birex Pharmaceuticals, which was bought by Helsinn and is now Helsinn Birex Pharmaceuticals. He also enjoys close relationships with his children and their families. But the jigsaw club has fulfilled other needs: for friendship and a social outlet.

“It was great to get out and I came home on Friday evenings revitalised and in good form from the jigsaws because I had been with mainly younger people. I’d still be hearing their voices and their laughter in my ears an hour or two or three after I got home and I enjoyed thinking back on some of the things they said. It is a very nice thing to do and I enjoy it very much.”