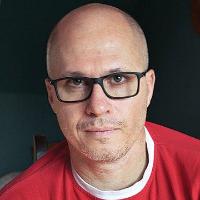 Aleksandar Hemon is a Bosnian-American fiction writer, essayist and critic who lives in New York. Professor of Creative Writing at Princeton University, his best known novels are Nowhere Man (2002) and The Lazarus Project (2008). He has won many literary awards, including the 2017 Pen America and the National Book Critics Circle Award for his autobiography The Book of My Lives. Irish author Colum McCann has described Hemon as “...quite frankly the greatest writer of our generation”. Hemon frequently publishes in The New Yorker and has also written for Esquire, The Paris Review and the Op-Ed pages of the New York Times. He was the keynote speaker at the Alternative Realities Conference in December 2019 with a lecture about what to read and write in the age of Trump.