Consentification and Treaties: When are Constitutions Not Enough? 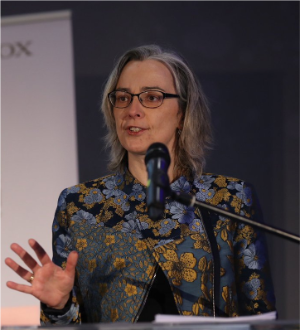 In our Zoom for Thought on November 2nd, 2021, UCD Discovery director Prof. Patricia Maguire spoke with Imelda Maher, Sutherland Full Professor of European Law and former Dean of Law, UCD, on UCD Discovery's Zoom for Thought series, about, "Consentification and Treaties: When are Constitutions Not Enough?"  In case you missed it, here are our Top Takeaway Thoughts and a link to the video.

Imelda’s talk title references a project she has been working on with long-standing collaborator Dermot Hodson, professor of politics in Birkbeck College, University of London.

“We're interested in this question of how difficult or how easy it is, or should be, to change the EU treaties.”

In Ireland we are “acutely aware” of such changes, after the high profile Nice and Lisbon referendums.

“Around the time of the last fiscal crisis, there was talk of treaty revision, but there was an appreciation as well that it is getting more difficult. In the last round of treaty consents there were 44 parliamentary chambers involved and that's before you get to the referendums or courts challenges, so it is more complicated. But complexity in itself is not necessarily a bad thing.”

What Imelda’s research interrogates and what she wants people - “especially politicians” - to reflect on “is that we need these consent processes in order to embed the EU more thoroughly and more securely at the national level”.

Her work looks at law and governance in the EU.

“By definition that tells you I'm right at the margins of law, which is an uncomfortable place to be but it's actually a very exciting place to be as well.”

Imelda is passionate about trying to unpack what she describes as “the black box of law in other disciplines”. There can be an assumption that “you feed a policy into this black box and it'll come out in an unproblematic fashion on the other side. When in fact, what emerges is something that requires interpretation”.

This is why we have a court system, regulators and police.

“We need our legal order to help us resolve differences between people in a civilised manner. I like to take that to other disciplines so that they can engage with me and we can extrapolate and explore the ideas that I have around law to see how they will play out in other domains.”

Democracy is “the least worst political system that we've got”. But with democracy there is “always the risk” of the tyranny of the majority.

“That's why we have to have counterweights in order to balance the idea of pure majority rule. We have to protect our minorities and actually that's what the law is there to do. It's not just ruled by the majority; it’s ruled by the law.”

This also ensures that those in power are accountable.

“Accountability is really important for political actors, who have to explain what they do by giving reasons. These are simple ideas, but their impact on our politics in our society are profound.”

Since the Irish constitution came into effect in 1937, there have been 32 amendments - but we do need some consistency for our foundational documents. “People need to feel secure that they have a sense of the overarching framework of the law, because that reflects the society in which we live.”

While we also need the capacity to change, there is a risk of many changes in quick succession having a “destabilising effect” and “one of the criticisms of the EU treaties is that there's been too much change over a relatively short period of time”.

In a democracy, the people give consent to others to rule them.

“It's different if you're talking about autocracies or dictatorships where the consent of the people is replaced by force - rule by law as opposed to rule of law. So you do need the consent. The classic model is people give their consent and often articulate it through the vote in order to be ruled on a representative basis.”

Will the EU continue in its current form? The EU operates on a consensus model, which “tends to only come to popular attention when there are major treaty changes and contentious issues are rightly debated”. But this consensus model “would suggest that it has capacity to continue”.

“There is a big debate going on at the moment around what we call ‘differentiated integration’ which would allow certain member states who were enthusiastic about a particular policy to deepen their engagement on it without being vetoed, if you like, by those who are less keen.”

Poland's top court recently rejected the principle of the primacy of EU law over national legislation in certain judicial matters, in a major challenge to the EU's legal framework.

“I don't think the idea of a member state looking to stay in the EU while not necessarily embracing all EU values was ever really considered at the time of the various treaty revisions. So it provided a very new context and one of the difficulties has been that the EU didn't really have the tools to tackle it. And that's now changing because there's been a plethora of case law from the European courts... Whether Poland is a model for everywhere else in Europe, I think it's more an outlier. Hungary, perhaps being a close second.”

The Future of Europe

Shared values are key to the continued success of Europe and it is not necessary to have “a really finely grained understanding of something like accountability or the rule of law in order to know that that is something that matters. If that matters to you, at the individual level, at the level of citizen or at the level of the state, I think that underpins what can happen at the European level”.

This article was brought to you by UCD Discovery - fuelled by interdisciplinary collaboration.

Imelda Maher is the Sutherland Full Professor of European Law and former Dean of Law.  Her research is in the field of EU Law and Governance and this project has emerged from D. Hodson and I Maher, The Transformation of EU Treaty Making: The Rise of Parliaments, Referendums and Courts since 1950 (Cambridge University Press, 2018).  On sabbatical this year, Professor Maher will be the NYU Emile Noel Global Fellow from Jan-July 2022.  She is a member of the Royal Irish Academy and an Honorary Bencher of the Middle Temple Inn of Court, London.