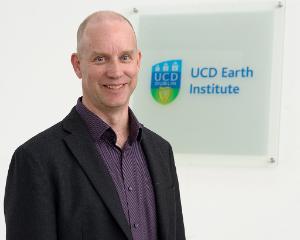 In our Zoom for Thought on December 14th, 2021, UCD Discovery director Prof. Patricia Maguire spoke with Prof. Tasman Crowe, director of the Earth Institute at UCD, on UCD Discovery's Zoom for Thought series, about, "Interdisciplinary collaboration to inform marine environmental management and policy".  In case you missed it, here are our Top Takeaway Thoughts and a link to the video.

As director of the Earth Institute, Tasman’s role is to help build a strong community of researchers, across the spectrum of disciplines at UCD, to better address environmental sustainability challenges. This involves running events and activities that bring people together and help them to identify and capitalise on funding opportunities. The institute also helps to put people in touch with stakeholders and potential industry partners, supporting those connections made.

The Earth Institute’s raison d'etre is to serve as a bridge between disciplines “because solutions to environmental sustainability challenges absolutely rely on a combination of science and technology with social sciences, arts and humanities”. Interdisciplinary collaboration enables a greater understanding about the changes people are willing to accept to mitigate climate change.

In collaboration with colleagues, Tasman developed a BSc in Sustainability. Launched last year, it has been “extremely rewarding as an undertaking”.

UCD is “so well placed to offer this kind of breadth and depth of coverage on sustainability topics, both in teaching and research” because of the spectrum of disciplines offered at the university, including “natural, physical and social sciences, engineering, arts and humanities”.

Tasman recently chaired  an advisory group on the expansion of Ireland’s network of Marine Protected Areas (MPAs). These are areas of seas, oceans or estuaries that restrict human activity for a conservation purpose. The group comprised “a range of experts from within and outside Ireland with interests ranging from life and ocean sciences through cultural and socioeconomic aspects of policy and governance”. They submitted a report to the government advising on how best to expand Ireland’s MPAs from the present 1.4% to 10% “as soon as is practicable” and to 30% by 2030, in line with our international commitments.

“There's a real sense of optimism that many of our recommendations will be taken up and used.”

Among the research that informed the advisory group’s report was work carried out by UCD marine ecologist Dr Paul Brooks and colleagues on the combined effects of multiple stresses on marine ecosystems. These stresses include invasive species, nutrient pollution and temperature changes in freshwater sources.

There is much concern among Dubliners that the sewage treatment plant at Ringsend can overflow after heavy rain. The original investment in this treatment plant was “a massive step-change” because prior to that, raw sewage was released directly into Dublin Bay.

“But what has happened since then is that the population of Dublin has grown, increasing the pressure on the plant. I think it's going to be important into the future to make sure that the capacity of water treatment keeps track of the increase in population.” A research project called Acclimatize, led by UCD professor Wim Meijer, is looking at the issue of Dublin Bay water quality.

Ireland “does not have the resources to police every activity” on its waters. So one of the “core recommendations'' of the MPA report was for “a high level of really good community engagement with any initiatives that you're trying to undertake on coastal and marine environment” to encourage a sense of stewardship and by-in from the public. Technological solutions, such as monitoring systems to track the movement of vessels, are also important.

Fish farms are associated with potential water contaminants, such as excess food, nutrients and medicines. A 2012 UCD study showed that such contaminants were found up to 25 metres away from fish farms but had dissipated by 100-200 metres. The evidence in more enclosed Scottish sea loughs, by contrast, “shows a much more damaging picture. That's not to say that we should be complacent about the Irish situation; there are definitely impacts there”. The industry here is “actually quite receptive to working to reduce those impacts”. Instead of imposing blanket bans on any potentially harmful activity for the environment, “the important question to ask is whether the way that it's being done in the places that it's being done would be in direct conflict with the conservation objectives of that particular protected area”.

Professor Tasman Crowe is Director of the Earth Institute at University College Dublin, co-director of a new interdisciplinary BSc in Sustainability and chair of the National Biodiversity Forum.  His research characterises individual and combined impacts of multiple stressors on marine ecosystems. He has also worked on biomonitoring, eco-engineering, invasive species, marine protected areas and the cultural value of ecosystems. He collaborates widely on national and international research projects and is coordinating the Land2Sea project funded under the Belmont-Biodiversa programme. He has published 100+ papers and book chapters and co-edited Marine ecosystems: human impacts on biodiversity, functioning and services published by Cambridge University Press (CUP).  He is on the editorial boards of Frontiers in Marine Ecology and CUP’s Ecology, Biodiversity and Conservation Series. He is on the committees of Future Earth Ireland and the Environmental Sciences Association of Ireland and was a founding member of the All-Island Climate and Biodiversity Research Network.  He was co-chair of the European Marine Board working group on ocean observation and was President of the European Marine Biology Symposium 2016-2019. He recently chaired an MPA Advisory Group established by the Irish government to provide advice and recommendations on the expansion of Ireland’s network of Marine Protected Areas.