The Future of Mathematics 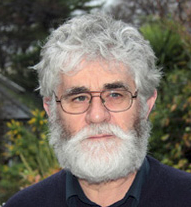 In our Zoom for Thought on September 29th, 2020, UCD Discovery Director Professor Patricia Maguire spoke to Peter Lynch, Emeritus Professor at the UCD School of Mathematics and Statistics, about “The Future of Mathematics”. In case you missed it, here are our Top Takeaway Thoughts.

Lynch always liked “sums” as they were called when he was in school. His Leaving Cert maths teacher and UCD professors “did a huge amount to foster a love of the subject as well as a knowledge of it and it’s been the passion of my life”. Maths teachers should have “a very broad understanding of its significance and its importance” and “love the subject”.

Lynch spent thirty-three years working in Met Eireann developing computer models for forecasting, work he describes as “an application of reasonably sophisticated mathematics to a very practical problem”. While he is an applied mathematician, “there are plenty of people who do mathematics purely for its own sake and are not particularly worried about the real world and that’s good because they develop things that very often turn out later to be valuable”.

Lynch’s course on recreational mathematics, the wonderfully titled AweSums, is more widely available now that it has moved online. Offered as part of UCD’s Access and Lifelong Learning programme, it is open to anybody with an interest in mathematics. “There are quite a lot of people in Ireland who feel they missed out at school, they didn’t really get it… The way I describe mathematics is: It’s beautiful, it’s useful and it’s fun.”

Four maths problems including Fermat’s last theorem were solved in recent decades “without any essential role by computers”. But others - such as the four-colour theorem and Kepler’s Conjecture “both depended strongly on computational support”. Lynch has “no doubt” that AI will have a “major impact on mathematics. It’s very controversial and some people would say, ‘Come on, maths is creative, it needs imagination, it needs flair - machines can’t do that’. But we have always tended to underestimate the power of these machines.” He poses another interesting question - will AI go one step further and actually formulate an interesting conjecture that “leads to major new techniques being developed and clever proofs... It’s not impossible that a computer will be able to do this. We don’t know”.

Why does maths have a reputation for difficulty? “Because it is! It is not an easy subject. It requires work.” Lynch compares Beethoven with his mathematician contemporary Gauss, but while the musician’s creative genius “gets into the brain on a hyper-channel without much effort”, Gauss’s “profound and beautiful” mathematics “takes work. But it’s worth working at to appreciate the beauty of it”.

Lynch says mathematicians are notorious for their inability to do simple calculations - he is dreading filing his own tax returns! He describes times tables as “nothing to do with real mathematics; just painful arithmetic”. He still recommends learning “at least the basic times tables” and feels that learning things off by heart is “absolutely essential”.

The “most outstanding unsolved problem” is the Riemann hypothesis, which says “all the zeroes are on a line except for the ones that aren’t”. Thousands of other theorems depend upon the Riemann hypothesis but there is still “no proof in sight. That’s another problem with mathematics, it is fundamentally incomplete”. Lynch quotes Kurt Gödel whose 1931 Incompleteness Theorem said there are “things that are true but that cannot be proved”. Maths is “wide open for geniuses to come along and answer these questions”.

This article was brought to you by UCD Institute for Discovery, fuelling interdisciplinary research collaborations in UCD.