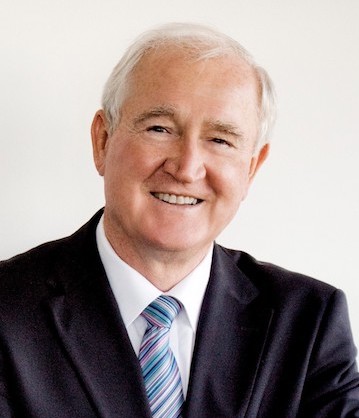 The world is embarking on a “once-off transition to sustainability”. All of our power and energy must come from non-fossil fuels by 2050. O’Connor estimates that 900,000 megawatts of offshore wind energy will be produced in western Europe to realise Commission President Ursula von der Leyen’s New Green Deal. This will mean building wind farms “in every water from Lithuania down to Portugal”. He sees a future where wind meets 60-70% of the world’s renewable energy demands “and the rest will be done with solar”.

While the EU has recognised a need for offshore wind farms, “the issue of grids” has yet to be resolved. There are currently no power grids off-shore. O’Connor’s company Supernode is developing a “supergrid” and is “probably a world leader in creating the underlying technology”. He adds: “The most interesting and challenging part of this is developing the grid, the meshed grid, the supergrid that’s going to take all this power from where it can be made cheaply to where the people are.”

Where the sea is more than 60m deep you cannot have fixed foundations. Instead “you have to put a floating platform in there and put a wind turbine on top of that”. Some thirty floating wind turbine designs are being trialled, in Japan, Portugal, France and Scotland. The most suitable version for Ireland’s North Atlantic has yet to be decided. “That will emerge in the next ten years,” says O’Connor, who is excited that the Scottish prototype has shown only an “absolutely tiny” 3 degree deflection at 80m above sea level, even in “storm force winds”.

O’Connor believes that Irish governments will invest in offshore wind “and we will be carbon neutral by 2050”. Our wind farms will be located “ten, fifteen or twenty kilometres off the west coast” and will boost a “very underpopulated, very underemployed” area. “You’re going to see a huge sale of electricity amounting to about €21 billion over there and that’s bigger than the whole of the agriculture, food and marine industries in Ireland”.

Wind turbines will pay for themselves after between nine to fourteen years, depending on the price we get for that power. “But that’s quite typical for any big, infrastructural project like building roads or sewerage plants.”

O’Connor’s company has spent the last twenty years developing wind energy on land “so we have lots of experience of resistance but also high acceptance of wind turbines”. Wind farms on land produce an average of about 30 megawatts “whereas offshore you’ve 500 megawatts and we’ve got planning permission for one offshore wind farm at 1,800 megawatts. For a whole load of reasons we’re going to see development in the future being offshore in almost every country”.

The industry needs more engineering graduates and universities play a “necessary” role in providing them. “Also for research and development; a whole bunch of new knowledge has to be created if we’re going to make this new transition effective.” Universities working with business is “the way forward”. He advocates for an interdisciplinary approach to developing renewable energy, with economists, for instance, exploring what the world will look like when we decarbonise. “Imagine a world where you don’t pay for the basic raw material? And how many jobs do we create if we build 20 million megawatts of wind and solar?” The movement away from fossil fuels has “major impacts on society” and universities are perfectly placed to explore those impacts.

This article was brought to you by the UCD Institute for Discovery, fuelling interdisciplinary research collaborations in UCD.