Maria Noone, Engineering Geologist with Arup and UCD geology graduate, 2019, talks to us about her journey from geology student to her current work in geology. 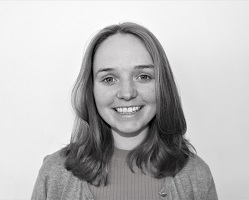 What does your current role involve?

I do a lot of environmental impact assessments on soils and geology in Ireland, to try and understand how they will interact with or impact an engineering design. As part of this, I supervise ground investigations, which includes the logging of soil and rock. The information we collect during these investigations feeds into reports for our clients, and help in the design of what they wanted to design, whether it's a road, a building, or a bridge. I also do a lot of excavation work which includes a geo-environmental aspect. At the moment, a big aspect of my work is trying to recycle construction and demolition waste materials. My current work is very different to what we did in college, but what I learned in UCD does apply, there is just a different spin to it. In industry, you learn so much so quickly, and there are so many interesting things that you can become involved in. For example, yesterday I was looking at sewage tanks: working on how to successfully remove them from a site and ensuring that they had not contaminated the surrounding ground.

What kinds of things do you do in a typical week?

Usually, I would have multiple projects on the go, but if there is a really big project, then I'll just be working on that one project. For example, over the summer I was supervising a huge excavation – where the client was excavating a couple of million tons of soil and rock - I had to be on site full time, because the soil and rock was mixed in with a lot of demolition waste and geo-environmental hazards, and was possibly contaminated. My role on site was to ensure that the excavation was in line with the European standard for recycled excavated material. I was on site from 8am until 4:30pm. I was outside most of the day, writing reports in the site office, taking photos, logging rock and soil, supervising geo-environmental testing and interacting with both the client and the contractor daily. At the moment, I'm writing a lot of reports from home and I'm working on a road project which involves filtering through different route options for a new road, with a main focus on how the road will impact the soil and geology and how the soil and geology will impact the design of the road. I also have a site investigation job on in the background. Yesterday evening I was out on site for half the day and I'll probably be on site at least one more day this week. That's a normal week for me. I’m mainly at home (due to Covid-19) or in the office, but I definitely get to go out for at least two days a week, which is really good.

Is a love of the environment relevant to your kind of work?

It’s super relevant. For example, there are a lot of materials we could recycle that we don't, especially in the building industry. It's nice to be part of the next wave of people that are trying to ensure everything is recycled as a default option. It's really interesting to be a part of the circular economy aspect of building.

What's the favourite part of your job?

I love the site work. I love how varied it is. I also love being part of a construction project. It's great to see things happening in front of you. When you're on site, you can really get a feel for what you're contributing to, and you're helping infrastructure grow in Ireland which provides a good sense of purpose.

How important is an understanding of the subsurface for a geologist working in industry?

It's really important to be able to conceptualize the difference between the shallow and the deep subsurface. In terms of thinking and being able to digitally analyze geophysical data, a background in geology is really important, because I can actually conceptualize what the data is showing. Having a background in geology does give you an advantage in being able to demonstrate to the engineering team what is in the subsurface and, from that, design the relevant structures.

What other skills are particularly useful for geologists?

Being able to communicate with and trust people, and in general being able to talk to people. In college, you're mostly focusing on yourself, but once you go into a work environment, you're reporting to people all the time. I would say some of the most important skills I learnt as a geologist include teamwork, modelling skills and communication skills. In terms of hard skills, soil and rock logging, data interpretation, data analysis, and report writing are all key skills I use daily at work.

Why did you choose geology?

In fifth and sixth year in school, I loved geography and physical geography, I really liked the sciences in general, so I decided to study Science (DN200) at UCD, mainly focusing on biology and physics. Since I loved geography in school, I decided to take a geology module as an elective - I took Introduction to Earth Sciences, and the first-year field trip. I liked geology so much that I kept it up in second year, but I wasn't intending to do it in third year, I just thought: I like this, so I'm going to keep going with it. Then I picked biology as my other option in second year, but halfway through second year I just knew I had to pick geology in third year - I absolutely loved it! I loved the field trips and learning about the Earth. It was more interesting for me to learn about geology than biology or physics, it clicked with me. I was just better at it I suppose, but that's probably because I liked it more. But what sold it to me were the fieldtrips - I loved them - I loved learning in that environment, rather than in the lab.

What was it about fieldtrips that you most enjoyed?

Fieldtrips are great in terms of getting to know your classmates. It's like an expedition – you come back and you’ve all been through the same experience. And you learn so much in such a short time. You probably learn more on field trips than in class. I know that not everybody will be comfortable going on a fieldtrip because it's a big thing to go away for a week when you're in first year and you don't know a lot of people. But I thought that was the best thing I did in first year - it was so much fun and I got to know so many people.

Do you have any advice for students interested in studying geology?

I would say take the introductory modules, because they cover nearly every aspect that you go on to learn more about. Try them and if you don't like them drop the subject - the nice thing about the degree is that it’s flexible. I personally would suggest taking the field trip in first year as well. The geology degree was definitely hard. I think there is a misconception that geology is easy. Because the introductory modules are easy, students think the degree will be very easy, but it gets so tough in third and fourth year, and it was great to have the lecturers available to answer questions. The subject is challenging: it will always get you to think and this process is rewarding and engaging. But after your degree, there are so many different avenues in geology that you can go down. For me, it made sense to pursue the Engineering Geology avenue. It enabled me to use concepts of structural geology as well as having a huge aspect of environmental geology which was important to me. Everybody who does geology has their own little niche. You can find your own passion because, within such a huge subject, there is a space for everyone.

What was studying in the UCD School of Earth Sciences like?

The small class sizes meant that what you get is close to one-on-one lecturing, which is fantastic. I would have been quite shy, and if I had been in a lecture hall with 200 students, I never would have asked a question. But in geology, because of the small numbers, it's really easy to engage and you almost have to engage, because if you don't, you'll be called out. The support from the lecturers was fantastic. You wouldn't get that anywhere else. In the school, you can talk to anyone about anything, and everybody is willing to help.

What was your experience of UCD?

I loved UCD. The people I met in science are amazing. I made friends for life. I still talk to most of my classmates every day. So much fun memories happen in college and it's just such a good campus - you can do anything without having to leave. I miss being out there. 100%, I loved every single second of my degree (except the exam weeks).