Following a proposal from the Employee Engagement Network, the University initiated a long service recognition award in 2018 for employees who reach 10, 25 and 40 years of service to UCD. The criteria for these awards are as inclusive as possible and celebrate the years that employees joined*, assuming they are currently employed, have held contracts with the University over that period and have not had breaks longer than 2 years. The 10 year awards are presented locally at College/VP level. The 25 and 40 year awards are presented at an event hosted by the President.

Also initiated in 2018 by the Employee Engagement Network, the UCD VIA (Values in Action) Awards recognise colleagues who bring the University’s values to life. Nominations are made by colleagues across UCD and six awards are presented annually

The awards celebrate individuals or teams/committees who;

The awards are open to all employees of UCD (full-time, part-time, permanent or temporary) who have worked in UCD for at least 2 years at the time of the nomination. They may be nominated by any member of the UCD community (employees, students, those working on campus or alumni). 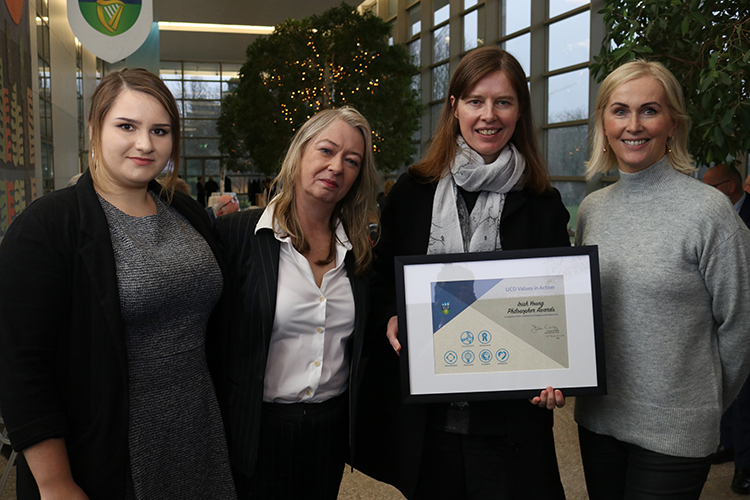 This team is being recognised for the Irish Young Philosopher Awards established in 2017. These awards encourage children from 3rd class primary to 6th year secondary to think about ethical and philosophical questions central to their lives. With only a small budget, the team had to leverage much goodwill and voluntary effort to establish the initiative, which was launched by the President of Ireland, Michael D. Higgins. The awards support the recent introduction of Philosophy to the national curriculum and in particular, looks to support the development of philosophical communities of enquiry in socially disadvantaged settings. The impact of the awards programme is reflected in the extensive media coverage and fact that other schools of Philosophy around the world are now interested in running similar events. The level of personal commitment to this project shown by the team speaks volumes about the teams’ passion for the subject and how positively it can impact the lives of children and adults.  This initiative promoted the values of creativity, engagement and collaboration. 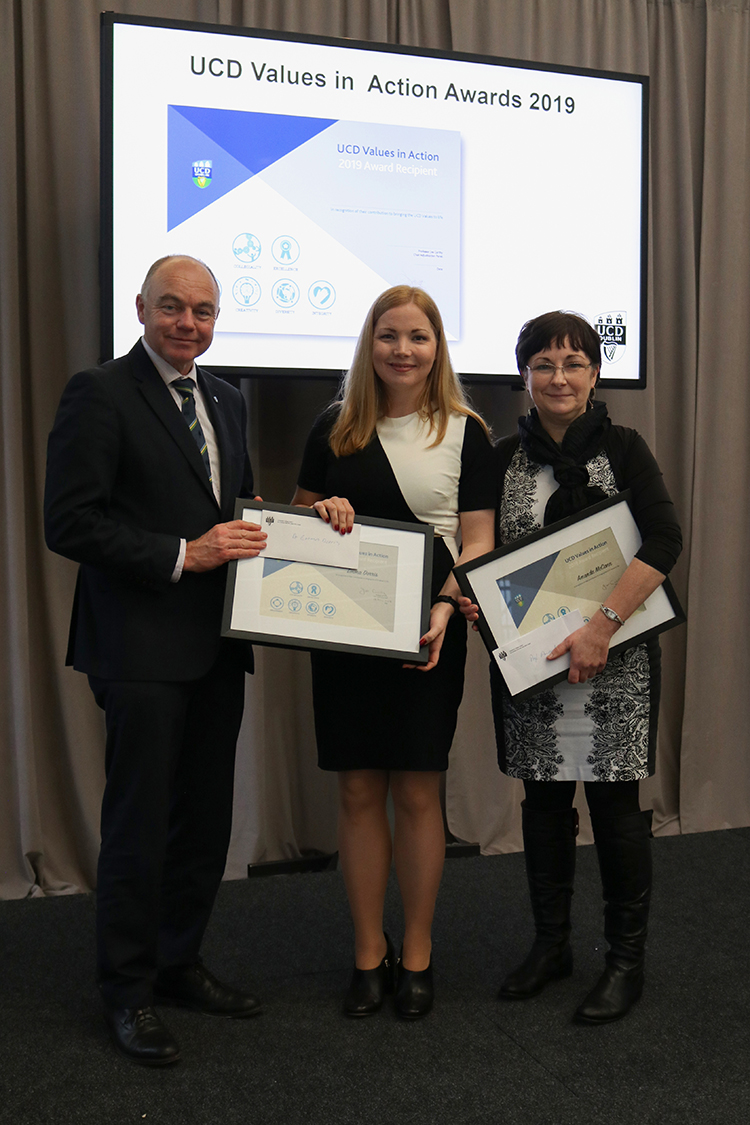 Amanda and Emma are both being recognised for their ground-breaking efforts to involve patients in research and treatment of disease. Amanda established the UCD Patient Voice in Cancer Research in 2016 to actively engage cancer patients, cancer researchers and others in discussions and the decisions making processes to positively impact on cancer research, treatment and outcomes for patients. This was the first group of its kind in Ireland. Initially established with no resources, the group was operated on the goodwill of researchers and only received funding recently from the Irish Cancer Society to rollout nationwide. Emma established a community of people living with arthritis and rheumatic musculoskeletal disease to help guide arthritis research in Ireland. Through a reorganisation of the governance structure of the Centre for Arthritis Research, to ensure that some of the steering committee members were patients, there is now a strong collaborative approach to the research being carried out by the centre. Emma now acts as a champion for patient and public involvement (PPI) in research at a local, national and international level. Both scientists show exceptional level of commitment to their respective fields and the patients they are trying to help and in doing so bring all 6 UCD Values to life. 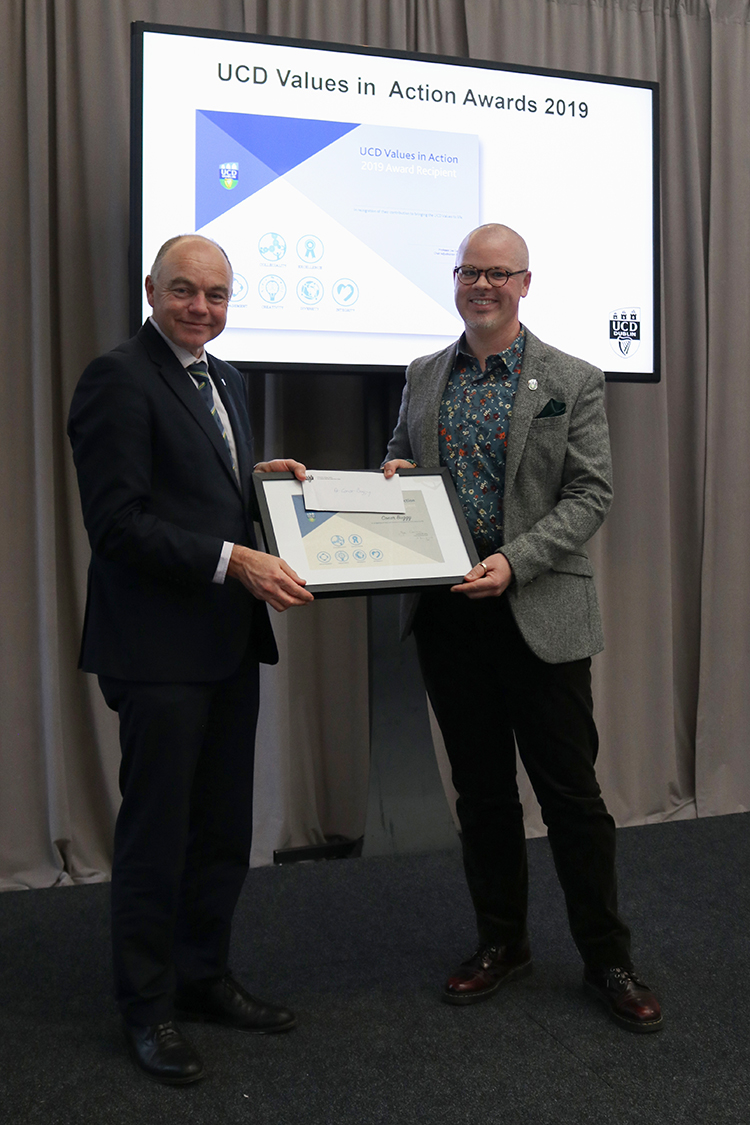 Conor is being recognised for how he daily takes his values, aligns them with the UCD Values and lives these in the work environment to the benefit of his colleagues and students. He epitomises collegiality, always there to answer academic queries, gives sensible advice and provides a listening ear. More formally, though in a voluntary capacity, Conor is a member of the Dignity and Respect Colleagues network in the University, making himself available confidentially to staff and students. He contributes to UCD’s equality, diversity and inclusion (EDI) agenda through his work on such initiatives as development of the Equality Impact Assessment Toolkit, being a vocal proponent of Athena SWAN, the redesign of UCD’s Dignity and Respect Policy, development of UCD’s Gender Identity Policy, mentoring female colleagues undertaking the Aurora programme and as an active player in ensuring greater recognition for LGBTI staff and students. 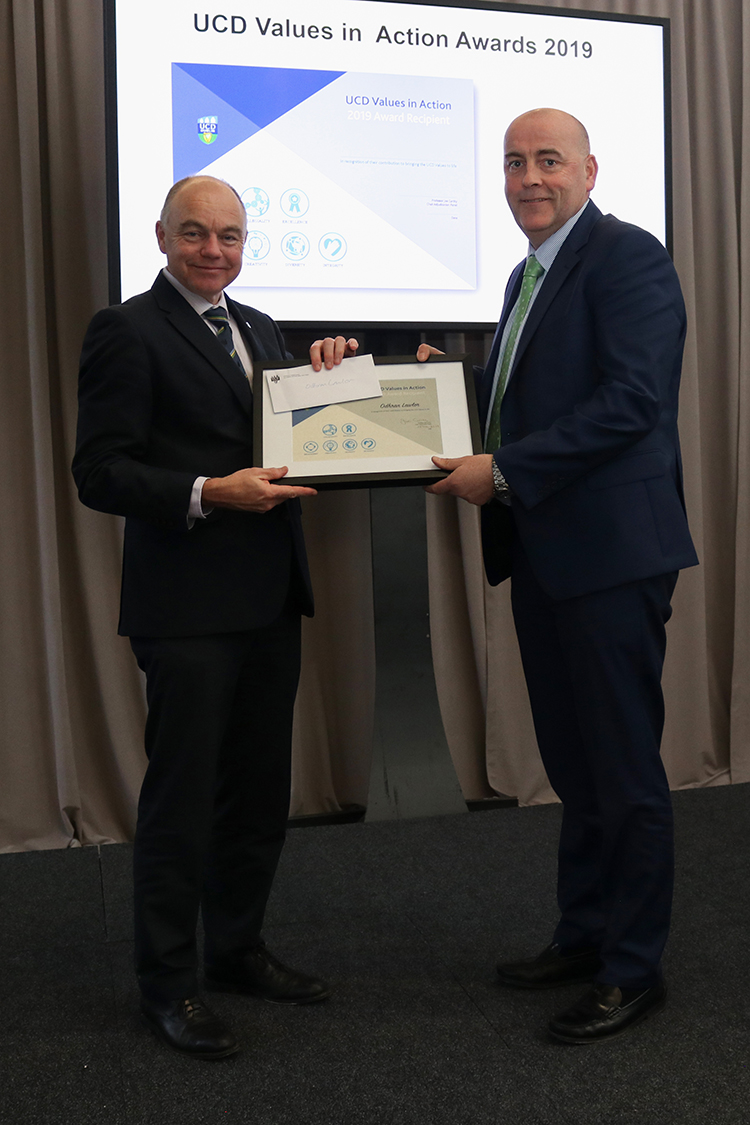 Odhran is being recognised for the significant impact he has had on UCD’s culture and levels of employee engagement since he joined the University some 3 years ago. Through his role as Hospitality Services Manager he has championed and driven many key initiatives that impact the whole UCD community, including introduction of the International Street Food Market held on campus every Thursday. This has become a hugely popular venue for meeting people and sampling a wide range of foods. In conjunction with Healthy UCD, he negotiated a trial removal and subsequent ban on the sale of high sugar sweetened beverages on campus, aimed at changing the beverage consumption behaviour of our 30,000+ campus community. Similarly, he played a key role in helping to deliver the annual Healthy Eating Week. Odhran has been involved in many engagement initiatives, including leading a team that delivered 'Christmas Movies' for the children of employees and organising and participating in Strictly UCD. He repeatedly brings colleagues together and delivers initiatives and events that better the UCD community. 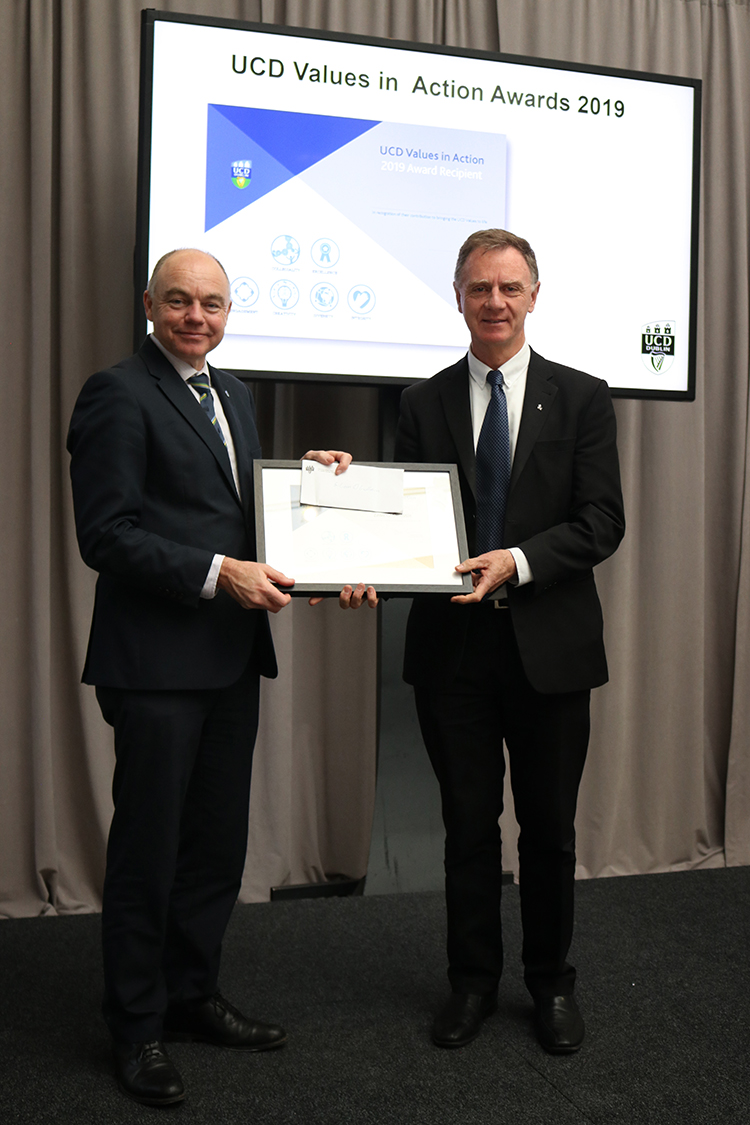 Leon is being recognised for his dedication to the UCD community in providing a professional, confidential and compassionate listening ear. He provides support, guidance and heartfelt advice to staff and students of all faiths and none, often going beyond the call of duty. He is generous with his time, making himself available outside working hours, on weekends and during holiday periods. Leon has helped break down barriers and overcome suspicion between the differing faiths on campus through interfaith gatherings to foster mutual respect and understanding between those from diverse backgrounds. Through his support he has helped countless staff and students through difficult situations including bereavement and made it possible for many students to remain in their course. He supports the efforts of St Vincent de Paul Society on campus to provide much needed funds to struggling students. Leon makes a valuable contribution to life at UCD through his work and commitment, bringing UCD’s Values to life.

UCD Purl Jam is being recognised for the creative and collaborative way it brings together UCD staff, students and retired staff and for engagement with a range of charitable initiatives. The group, established in 2017, now has over 150 members and gather once a week to work on their crafts, share experiences and collaborate with others across the University. A key focus of the group has been production of craft items for charity initiatives including; Tentacles for Tinies (knitted octopuses for premature babies in the Rotunda Hospital), Stitched with love (project to commemorate the Tuam Mothers and Babies), animal jumpers for the UCD Vet Hospital, Twiddlemitts (a project for people living with dementia in collaboration with SVUH) and clothing for the Rotunda Hospital social workers to distribute to the local community. The group is run by Niamh Nestor and Catriona Keane.

65 nominations were received. Some nominees were nominated by more than one nominator.