An academic essay has particular standards in argument and presentation. While your tutor/seminar leader will advise you on matters of argument, this sheet introduces what is expected of you in terms of presentation.

Presentation requirements are available in the MLA Handbook (8th ed). It offers an efficient and accurate way of presenting material evidence in a scholarly essay. The MLA Handbook is an essential book for students of English and you should own a copy.

1) CITING EVIDENCE IN YOUR ESSAY

Most often you will use three types of evidence that require supporting references. This is the evidence that you CITE to support your argument in a scholarly essay:

c)      Loose paraphrase or general ascriptions of points of view.

References to the sources of quotations or paraphrases must follow the quotation or paraphrase in the main text of your essay and must be placed in brackets (parenthetical referencing). A reference typically consists of a page or line number, but may require the author’s name or a shortened title of the text along with the page or line number. The full details of the quoted or paraphrased work are then included in the “Works Cited” section. You should offer just enough information within the brackets which will allow your reader to identify the source you have used in your “Works Cited” section.

NOTE: NOT CITING your sources properly exposes you to the charge of PLAGIARISM which may result in deduction of marks and/or disciplinary action (see separate School guidelines on plagiarism on Blackboard and on the School website).

NOTE: Advice on citation? Please contact the Co-ordinator of your course during office hours.

Quoting from NOVELS, SHORT STORIES, AND THE WORK OF CRITICS:

How to quote short quotations (FOUR OR LESS LINES OF PROSE)

Middlemarch’s opening sentence is simple, but telling: “Miss Brooke had that kind of beauty which seems to be thrown into relief by poor dress” (7).

NOTE: The quotation is introduced by a colon, placed in double quotation marks, and the full stop entered after the brackets containing the reference to the source.

How to quote longer quotations (MORE THAN FOUR LINES OF PROSE)

There were greenhouses, too, but they are all broken now. There

was legal trouble, I believe, something about the heirs and co-heirs;

anyhow, the place has been empty for years. That spoils my ghostliness,

I am afraid, but I don’t care–there is something strange about the

NOTE: Quotations should be indented 10 spaces or 2 tabs from the margin and do not usually require double quotation marks. In indented quotations, the brackets are placed after the final punctuation.

How to quote SECONDARY SOURCES (the work of critics, for example)

Michael McKeon suggests that the “origins of the English novel occur at the end point of a long history of ‘novelistic usage’” (19).

How to quote UP TO 3 LINES of a POEM

Ben Jonson quickly introduces us to the twin themes of his elegy on Shakespeare: “To draw no envy, Shakespeare, on thy name, / Am I thus ample to thy book and fame” (“To the Memory of My Beloved” lines 1-2).

NOTE: You should list LINE numbers when available in preference to page references. The initial citation for the poem should include the word “line” (or “lines”) to make it clear that the numbers designate lines not pages.

NOTE: If there are no lines numbers printed with the poem, use page numbers in your citation.

NOTE: A slash or virgule ( / ) indicates the end of a line of a poem that is not indented.

How to quote MORE THAN 3 LINES of a POEM.

Jonson emphasises that Shakespeare is exceptional by using exclamation marks and by suggesting that he has a special place among the poets:

I therefore will begin. Soul of the age!

The applause! Delight! The wonder of our stage!

My Shakespeare, rise; I will not lodge thee by

NOTE: Quotations should be indented 10 spaces or two tabs from the margin and do not usually require quotation marks. You must also follow the layout of the poem from which you are quoting.

NOTE: As this is the second reference to the poem, the word “line” is omitted from the citation.

How to quote a passage from a PLAY

Throughout Othello Iago proves to be a master manipulator of language, using insinuation and inference to plant suspicion in Othello’s mind:

IAGO. Nothing, my lord; or if–I know not what.

OTHELLO. Was not that Cassio parted from my wife?

IAGO. Cassio, my lord? No, sure I cannot think it

That he would steal away so guilty-like,

NOTE: The same rules on length apply here as with poetry and prose (above). However, if quoting dialogue between two or more characters, you must indent the quotation 10 spaces or two tabs, and list the characters’ names, followed by a full stop. You must also follow the layout of the play from which you are quoting.

NOTE: State the edition used. This will appear in your Works Cited section as below. It should always be a “reputable” edition rather than, for example, an edition which is published for a different stage of education (for example, secondary schools).

How to quote from FILM SOURCES

The same rules apply as for prose and drama in terms of length and dialogue between characters. If you are working from a DVD, note the time or range of times (provide the hours, minutes, and seconds displayed by your media player. Cite the title of the DVD followed by the segments of time should be separated with colons: eg. The Birds 00:2:23-35,); the same applies if you are working from a video online, note the elapsed time in minutes. In both cases, ensure that the details of the version used are included in your Works Cited entry.

“The inter-title which prefaces each individual narrative in About Adam directs the audience to each character’s attraction to Adam. For example, serial-dater Lucy is intrigued by his apparent shyness:

How to quote from ONLINE SOURCES

Example: Harriet Jacobs begins her narrative of her life with a dramatic account of her childhood innocence: “I WAS (sic) born a slave; but I never knew it till six years of happy childhood had passed away” (ch.1).

NOTE: The use of (sic) indicates that you are quoting accurately from the text and that the capitalised “WAS” is not your typographical error.

How to quote from a DIGITAL FILE (Kindle files, for example):

Example: According to Hazel Rowley, Franklin and Eleanor Roosevelt began their honeymoon with a week’s stay at Hyde Park (ch. 2).

NOTE: Some digital files do not provide any numbering and so the work has to be cited as a whole.

A Works Cited section is a list of all primary and secondary material cited in your essay (this may include non-print sources). It should be arranged alphabetically by author’s surname or title of the text, play or film, and placed at the end of your essay on a separate page.

The basic format for an entry in a Works Cited section provides four units of information and each is separated by a full stop:

How to list A POEM FROM AN ANTHOLOGY (includes edition, editors and page numbers):

Jacobs, Harriet. Incidents in the Life of a Slave Girl, Written by Herself. Boston, 1861. American Studies @ University of Virginia, xroads.virginia.edu/~hyper/Jacobs/hj-sire-index.htm

Kiberd, Declan. “Samuel Beckett – Mystic.” Lecture, 17 May 2012, University of London, Youtube, uploaded by the Institute of English Studies, 25 May 2012, www.youtube.com/watch?v=jyvyy4Gpcpc

How to list SOME OF these examples in a WORKS CITED SECTION:

Jacobs, Harriet. Incidents in the Life of a Slave Girl, Written by Herself. Boston, 1861. American Studies @ University of Virginia, xroads.virginia.edu/~hyper/Jacobs/hj-sire-index.htm .

Kiberd, Declan. “Samuel Beckett – Mystic.” Lecture, 17 May 2012, University of London, Youtube, uploaded by the Institute of  English Studies, 25 May 2012, www.youtube.com/watch?v=jyvyy4Gpcpc 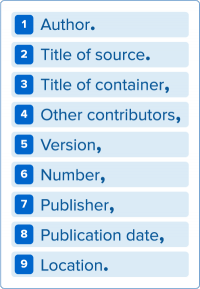 Requirements for the “Works Cited” Section of Assessments

Submitted to the UCD School of English, Drama and Film

(Note: There is a separate penalty for Late Submission of assignments.)

Where to go from here: read the document “MLA Style Sheet: A Brief Introduction – UCD School of English, Drama and Film” and use your copy of the MLA Handbook (8th ed.).