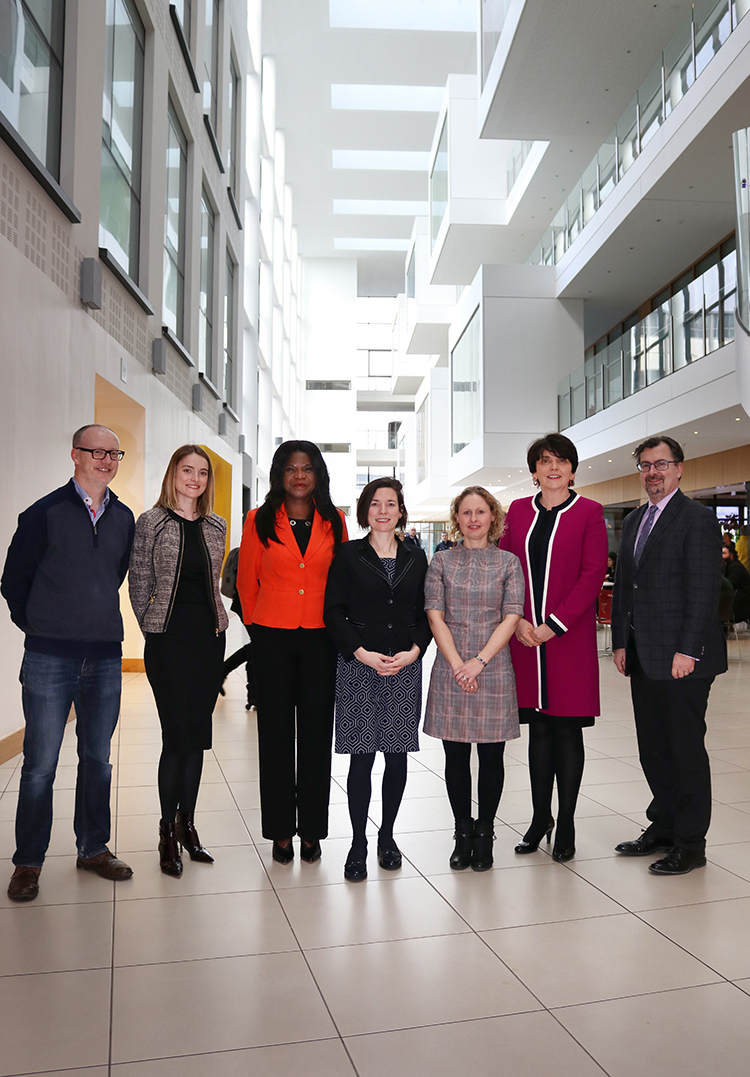 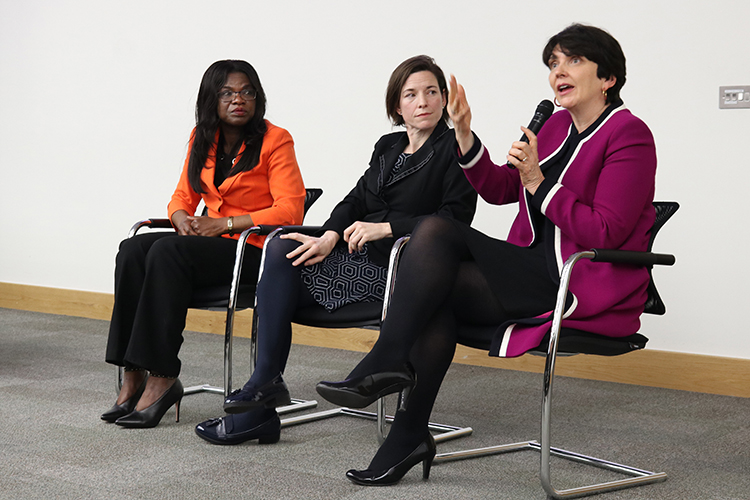 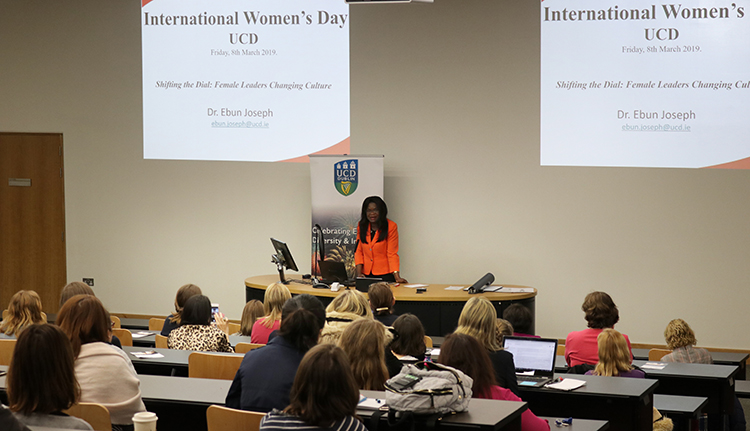 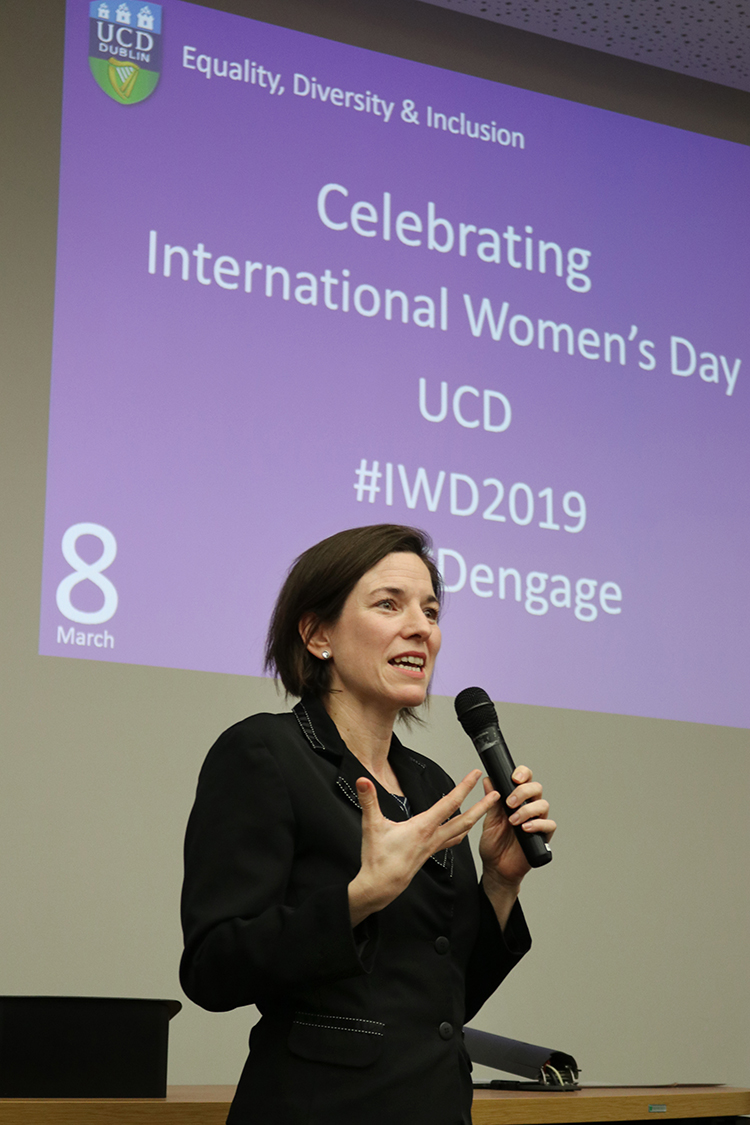 Scroll down to find information on coffee mornings, talks & seminars, workshops and more. Check out the details below and make your booking today. More details will be added as we approach the day.

To mark International Women's Day 2019, UCD Alumni Relations are gathering voices from across the globe of UCD alumni, students and staff who are making an impact everyday in the fight for better balance and gender equality. Join us as we strive for #BetterforBalance. Keep an eye out for updates in the coming weeks...

College of Health and Agricultural Science:

Office of the Registrar and Deputy President

Join us to hear inspirational speakers share their story, addressing gender and race inequalities, leading change and creating a more inclusive culture for women in higher education, sport and workplaces in Ireland.

Dr Ebun Joseph is an Intercultural Consultant and lectures on race, migration, social policy and equality. She is the Module Coordinator at University College Dublin (UCD) of the first Black Studies course in Ireland. She holds the position of Career Development Consultant at the Royal College of Surgeons in Ireland. She held a similar role in UCD and worked with Business in the Community Ireland for over nine years as a Training & Employment Officer supporting immigrants from over 73 different nationalities in accessing the labour market. Ebun has a Masters from Maynooth University in Adult Guidance and she is an IACP accredited Counsellor. Dr Joseph focused her PhD dissertation, titled ‘Racial Stratification in the Irish Labour Market’ on workforce experiences. She also founded the African Scholars Association Ireland, and the Unforgettable Women Network, an organisation aimed at empowering women of minority groups in Ireland through motivational talks. Ebun is a prolific conference speaker with regular TV appearance. Dr Joseph has recently written ‘Whiteness and racism: Examining the racial order in Ireland’, which was published in the Irish Journal of Sociology in 2017.

Irish Woman of the Year 2018, Su Carty has her own business, working with business owners who are struggling with stress, disconnect and conflict in the team leaving them with a stress-free united team who own their performance and produce outstanding results.
Appointed World Rugby Council member last year, Su Carty is the first Irish female representative on World Rugby Council.
Su set up her own business after 7 years as the first Women's Development Manager for World Rugby where she led the growth of the women's game globally from 4% of the playing population to 25%.

Her contribution off the pitch started with setting up the Leinster Women's Committee. She went on to the Irish Women’s Rugby Football Union Committee first as Vice President and then as President. She was the last President of the IWRFU as she led the integration of the IWRFU into the IRFU.

She started her career as a Psychiatric Nurse, specialising in Child and Adolescent Mental Health and holds a Masters in Cognitive Behavioural Therapy.

Professor Orla Feely is Vice President for Research, Innovation and Impact and a Professor of Electronic Engineering at University College Dublin. She holds a BE degree from University College Dublin and MS and PhD degrees from the University of California, Berkeley, where her PhD thesis won the DJ Sakrison Memorial Prize for outstanding and innovative research. While at UC Berkeley, she also won the Outstanding Graduate Student Instructor Award. Her research is in the area of nonlinear circuits and systems, and she has been awarded research grants and prizes from a number of national, international and industry sources.

Professor Feely is a Member of the Royal Irish Academy and a Fellow of the IEEE (Institute of Electrical and Electronics Engineers), Engineers Ireland and the Irish Academy of Engineering. She has served as Chair of the Irish Research Council, the EU Advisory Group on Marie Sklodowska Curie Actions, and the IEEE Technical Committee on Nonlinear Circuits and Systems, and as a member of a number of Editorial Boards. She is a director of the Young Scientist and Technology Exhibition and a member of the Higher Education Authority.

In partnership with Mountains to Sea Festival, the UCD School of English, Drama and Film will bring together remarkable Skein Press authors Melatu Uche Okorie, Philomena Mullen and playwright/ performer Rosaleen McDonagh in a discussion chaired by Dr Anne Mulhall, co-director of the UCD Centre for Gender, Feminisms & Sexualities.

To celebrate International Women’s Day (IWD) 2019, we are delighted to invite you to two events taking place in the College of Social Sciences & Law

On the eve of IWD 2019, the Centre for Gender, Feminisms and Sexualities will host Dr Maddy Coy on "Prostitution, Harm and Gender Equality".

The annual College of Social Sciences and Law International Women’s Day (IWD) 2019 celebration in collaboration with the Equality, Diversity and Inclusion Unit will take place on Friday, 8th March 2018 at 10:30am in D101 Newman.

Join us for coffee and a #BalanceforBetter panel discussion. Speakers:

For catering purposes please rsvp by email to fiona.smyth@ucd.ie by Tuesday 5th March 2019.

'When the world answered' - Film screening

Film made by Advancing Women Artists - AWA, based in Florence.

Join us for the opening of this illuminating photographic exhibition by UCD alumnus and artist Lisa Butterly and photographer Lisa McCormack. A legacy collection of unique and symobolic portrait photos made by women for women of Ireland. The imagery contains personal moments, untold secrets, public and private stories. The stories look at voting rights, politics, religion and reveal the value of friendship, motherhood and family.

Women of Ireland - Stories We Share was created by Lisa Butterly and Lisa McCormack from County Louth. Lisa Butterly holds a BA and PhD in History from MU and an MA in Art History from UCD. She is a self-taught artist. Lisa McCormack graduated in Photography from DIT and is a successful and award-winning wedding and portrait photographer. This collaboration resulted in the creation of 15 stunning portraits including a total of 50 sitters. The portraits also capture purpose-made sculptures and 2D artwork, personal stories and shared national histories. In entirety, the collection is a textual volume examining the history of women in Ireland since 1916, presented in a purely visual language. Consequently, each portrait is a chapter, every sitter is an actor and the stories they tell are the ones that we share.