Launch of Mapping Laois from the 16th to the 21st Century (Wordwell, 2018) by Dr Arnold Horner at Notre Dame Dublin gateway

Mapping Laois, a new volume by Dr Arnold Horner, was launched in Dublin by Dr Matthew Stout (DCU) at the Notre Dame Dublin gateway on Friday 23rd November. Introducing the launch Prof Kevin Whelan (Notre Dame) described Arnold as one of the giants of Irish historical geography along with our other former colleague, Prof Anngret Simms.

In Mapping Laois from the 16th to the 21st century, Arnold reviews and seeks to provide context for the extraordinarily rich diversity of manuscript and printed maps that record the changing political, economic and social circumstances of an Irish county over nearly five centuries. The flavour of these varied, informative and often colourful maps is captured in over 400 illustrations, among which are reproductions of six early county maps and a unique assemblage of images from the Ordnance Survey ‘fair plans’ of c. 1838–40. This is not just an academically rich but also a beautifully illustrated and produced book which captures the cartographic heritage of Ireland through the eyes of one county.

The book was launched in Laois earlier this month and received widespread coverage in the Laois Nationalist and other local newspapers. Previously Arnold’s collaborations with Wordwell Press focused on the innovative county maps produced in the early nineteenth century by the roads engineer and surveyor William Larkin: Mapping Offaly(2006), Mapping Meath (2007) and Mapping Sligo(2011). Congratulations on this excellent new publication! 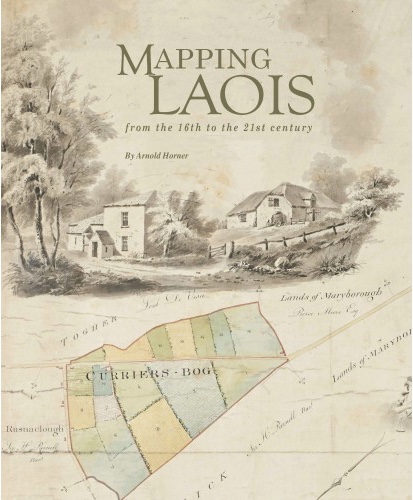