Negotiating a Settlement in Northern Ireland, 1969-2019 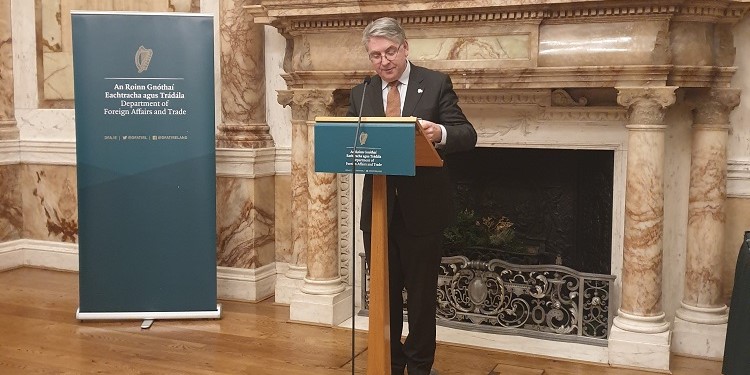 Niall Burgess, Secretary General of DFAT, who hosted the book launch on March 2

An event to mark the launch of 'Negotiating a Settlement in Northern Ireland, 1969-2019', by John Coakley and Jennifer Todd, was hosted by the Department of Foreign Affairs and Trade on Monday, 2 March 2020.

The Good Friday Agreement of 1998 ended a protracted violent conflict in Northern Ireland and became an international reference point for peace-building. Negotiating a Settlement In Northern Ireland, 1969–2019 traces the roots and outworkings of the Agreement, focussing on the British and Irish governments, their changing policy paradigms and their extended negotiations from the Sunningdale conference of 1973 to the St Andrews Agreement of 2006. It identifies three dimensions of change that paved the way for agreement: in elite understandings of sovereignty, in development of wide-ranging and complex modes of power-sharing, and in the interrelated emergence of substantial equality in the socio-economic, cultural, and political domains. The book combines wide-ranging analysis with unparalleled use of witness seminars and interviews where the most senior British and Irish politicians, civil servants and advisors discuss the process of coming to agreement. In tracing the processes by which British and Irish perspectives converged to address the Northern Ireland conflict, the book provides a benchmark against which the ongoing impact of Brexit on the Good Friday Agreement can be assessed.

John Coakley and Jennifer Todd are former directors of the UCD Institute for British-Irish Studies (IBIS) which is housed in the School of Politics and International Relations and Jennifer Todd is currently Research Director of the Institute.

IBIS is grateful to DFAT for its ongoing support.