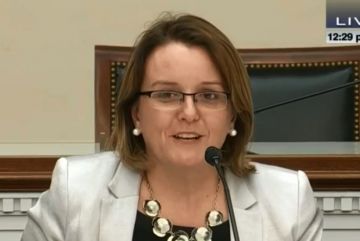 We congratulate Gail Slater, alumna of the UCD School of Law, on her senior appointment at the White House.  Gail has been appointed adviser to President Donald Trump on technology, telecommunications and cybersecurity.  She is a dual Irish-US citizen and will be a special assistant to Mr Trump working with the administration’s national economic council. Originally from Dalkey in Co. Dublin, she has been living in the US since 2003.

Gail Slater is believed to be the only Irish-born member of staff in Mr Trump’s White House. She moves from her role of general counsel at the Internet Association, a trade association which represents technology giants such as Google and Facebook where she advised on legal and regulatory policy.  Ms Slater, whose maiden name is Conlon, is familiar with Washington politics. She is married to Lindsay Slater, chief of staff to Congressman Mike Simpson, a moderate Republican from Idaho.