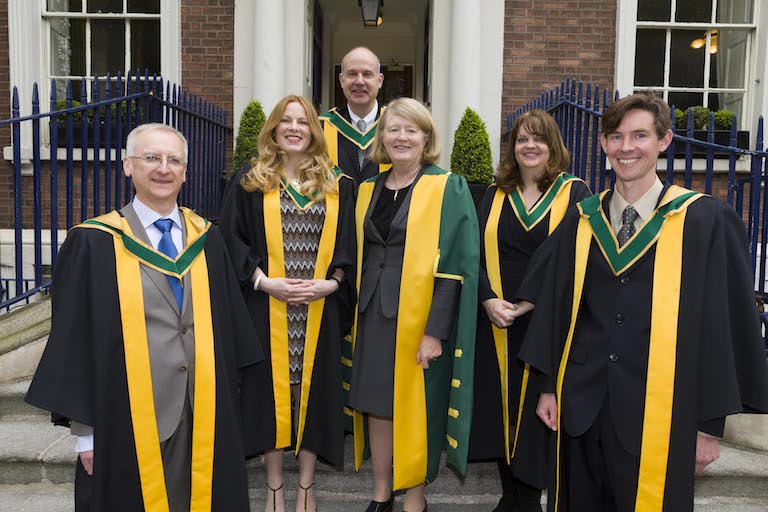 The Royal Irish Academy (RIA) has elected five new members from University College Dublin in recognition of their academic excellence. Membership to the RIA is by election only and is considered the highest academic honour in Ireland.

The work of Professor Devereux covers the economic impact of education, intergenerational mobility and the effects of family characteristics and family structure on child outcomes.

He has collaborated extensively with Professor Sandra E. Black who was nominated by US President Barack Obama to join the White House Council of Economic Advisors.

His work has been published in Quarterly Journal of Economics, American Economic Review and Economic Journal.

Professor Devereux currently serves on the council of the European Society for Population Economics.

Professor Negra is Professor of Film Studies and Screen Culture. Her work examines the insights offered by popular media into the societies that produce and view them.

Her work has been featured by CNN, BBC, The Guardian, Newsweek, The Independent and the International Herald Tribune (now International New York Times).

Her previous work includes Extreme Weather and Global Media; Gendering the Recession: Media and Culture in an Age of Austerity; In the Limelight and Under the Microscope: Forms and Functions of Female Celebrity and Old and New Media After Katrina.

Professor Negra will publish The Aesthetics and Affects of Cuteness in 2017.

The work of Professor Dias is at the forefront of research in fluid mechanics. It covers a range of ocean-based areas including tsunami warning systems, rogue waves and wave energy.

Professor Dias was awarded a European Research Council (ERC) grant to jointly lead a project that aimed to unravel the mysteries of the origin of rogue ocean waves.

He received a Principal Investigator Award from Science Foundation Ireland in 2011 for his research into “High-end computational modelling for wave energy systems.”

Professor Dias is serving co-editor of the European Journal of Mechanics B/Fluids and member of the French National Committee on Mechanics.

His work on quantitative biological mechanisms has led to improved therapies, particularly in the treatment of cancer.

Professor Kolch aims to ‘decipher the networks of life with his work’. He co-ordinates interdisciplinary research to simulate biochemical networks to understand the dynamic interactions within them.

Professor Teeling is a world authority on bat ecology and evolution. She studies bats for insights into human diseases such as blindness and deafness as well as aging.

Her research into the fields of zoology, phylogenetics, genomics and conservation biology uncovers the genetic signatures of survival that enables species to adapt to an ever-changing environment.

She established the Laboratory of Molecular Evolution and Mammalian Phylogenetics in 2005 and is Director of the Centre for Irish Bat Research at UCD.

Professor Teeling and her team have been awarded more than €4 million in funding to support their research.

Conor Gearty is Professor of Human Rights Law and Director of the Institute of Public Affairs at London School of Economics. He is also a practising barrister.

His scholarship has covered civil liberties, human rights and the risk to freedom and democracy posed by state security responses to terrorism.

Garret A. FitzGerald is chair of Systems Pharmacology at University of Pennsylvania.

His work contributed to the development of low-dose aspirin and revealed how non-steroidal anti-inflammatory drugs present a cardiovascular hazard.

The Royal Irish Academy is an all-Ireland academic body that promotes study and distinction in the sciences, humanities and social sciences. It was founded in 1785.

Professor Mary E. Daly, UCD School of History, is the current president of the RIA. She became the first woman to hold the post in its 229-year history when she was elected in 2014.