European Union has been looking inward for too long, says Catherine Day

The European Union needs to become more engaged with the wider world instead of looking inward, according to Catherine Day, former Secretary General of the European Commission.

Day made the remarks as part of the UCD Annual Garrett Fitzgerald Lecture 2017, which she delivered at UCD recently.

Day said the EU has been inward looking in recent years due to a series of events, including its failure in 2005 to ratify a treaty establishing a constitution for Europe, the economic crisis and more recently Brexit. 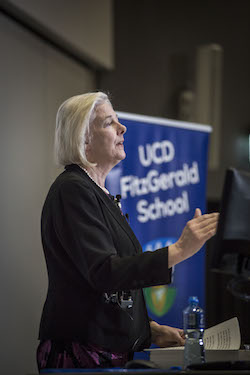 “I think we have had enough sobering experiences, now maybe it’s time to pitch it slightly differently and maybe have more success in the future.”

She said Ireland and Europe were facing a particularly difficult period over the coming years. It was likely that Brexit would be particularly “challenging” for Ireland and there was a risk that that the negotiations on the UK’s exit from the EU would end in “acrimony”.

“I think it’s going to be a long process and a decade is not an unrealistic time assessment.”

She also said it was vitally important that young people get involved in the European Union so that they can influence the kind of society they, and their children, will live in.

She said one of the most depressing experiences she has had in recent months was meeting lots of young English people who felt “adrift” after the UK referendum result on Brexit.

"It will get nasty, there will be dirty tricks" Catherine Day on #Brexit negotiations #FitzgeraldSchool pic.twitter.com/GvJ1O6dU27

She also called on EU policymakers to do more to ensure that the Union’s citizens were more informed about its policies decisions and EU law. In light of the fact that Ireland has benefited enormously since it joined the then EEC in 1973, she said she hoped Irish people could make what she described as a “mature re-commitment to the EU”.

The lecture was entitled “Where to After Brexit/Trump? Navigating an Uncertain Future”.

Catherine Day now sits on the board of the European Movement Ireland, the Institute of International and European Affairs in Dublin and the Advisory Council of the European Policy Centre in Brussels.

She is a special adviser to the President of the European Commission. She graduated from UCD with B.A in economics and politics and an M.A. in international trade.

The Annual UCD Garret FitzGerald School and Lecture 2017 is named to commemorate Garret FitzGerald’s long-standing and close connection with University College Dublin It also recognises the significance of Dr FitzGerald’s dedication to scholarship and many contributions to public life.