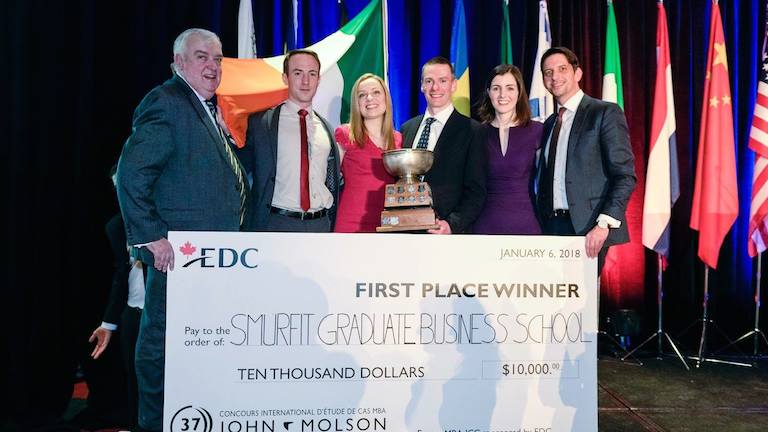 The five-day competition presents teams with case studies of seven businesses and problems they face. For each case, teams are given three hours to develop and present a solution using the skills and knowledge gained from their MBA programme.

UCD Smurfit’s team of Gearóid Ó’Briain, Maria Barry, Andrew Gebelin, Ruth Lalor and Paul Donnelly was the overall winner of the $10,000 prize. They were coached by Professor Patrick Gibbons, Professor of Strategic Management at UCD Smurfit.

The final required teams to give a live 25-minute presentation on how Walmart could protect its brick-and-mortar market share while also developing its online operations to prepare for “the future of shopping”. This was followed by 15 minutes of questions from judges.

Taking on business schools from Brazil and Canada in the final, UCD’s cornerstone proposal was a $68 billion takeover of Macy’s department store. Macy’s would become an “experience store” for consumers to see and touch products. Jet.com, acquired by Walmart in 2016, would handle stock and shipping.

The low-cost business of Walmart company should be kept commercially separate from the higher-cost online offering, UCD’s team said. Both should be held by a parent company branded as FutureCo to shift perception away from Walmart as a traditional low-cost and low-quality company.

Proposals were judged based on creativity, insight, substance and plausibility of implementation. In total, 36 international business schools from 19 countries took part in the competition.

Established in 1981, the John Molson MBA International Case Competition is organised by MBA students at Concordia University in Montreal, Canada. It is open to top business schools worldwide and is recognised as the oldest and largest case competition of its kind in the world.