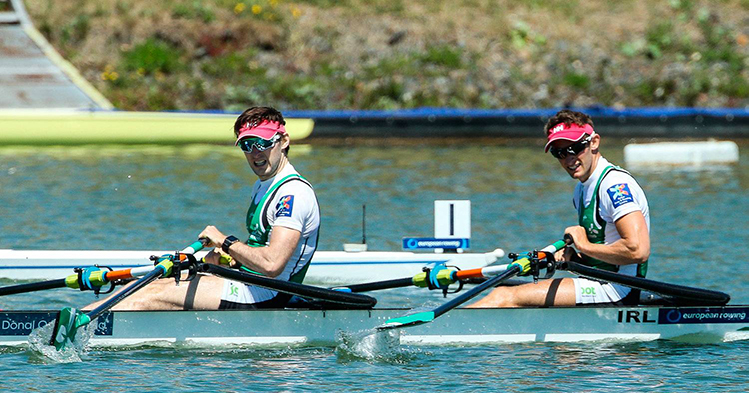 University College Dublin alumnus Paul O’Donovan and his brother Gary have won gold in the final of the men’s lightweight double sculls at this year’s World Rowing Cup.

The silver winning Olympian, who recently graduated from UCD’s School of Public Health Physiotherapy and Sports Science, captured the top prize at the competition in Switzerland earlier this week.

The former physiotherapy student and his brother were placing third in the 2000m race, behind Denmark and Belgium, until they pushed ahead to the front of the pack at the halfway mark.

The Irish pair held their lead throughout the remainder of the race despite a strong push from Belgium in the final 250m, to cross the line 0.8 of a second ahead of their closest rivals in a nail-biting finish.

Our World Rowing Cup III winners, Gold medalists in the lightweight men’s double sculls, Gary & Paul O’Donovan and Silver medalist in the Women’s single sculls, Sanita Puspure. Fantastic results & huge congratulations from all of us at the #IrishRowChamp2018 pic.twitter.com/3gjiQwNS0R

Speaking to WorldRowing.com after the race, Gary O'Donovan said: "It was a pretty good race, Denmark took over for a while but then we swapped. We managed to throw ourselves over the finish line in first.

"We like to take the opportunity to race so we’ve been quite busy recently."

That moment before hearing if you won pic.twitter.com/tz0pvEItSA

As a UCD Ad Astra Elite Sports scholar, Paul and brother Gary made history in 2016 when they became the first ever Irish rowers to win a medal at the Olympics, taking silver in the lightweight men’s double sculls final at the Summer Games in Rio.

The talented pair will now compete for Ireland in the lightweight men’s double at the European Championships over the August bank holiday weekend.

Elsewhere, there was more good news for UCD rowers as a team won the Men’s Intermediate Eights after a thrilling race at the National Rowing Centre.